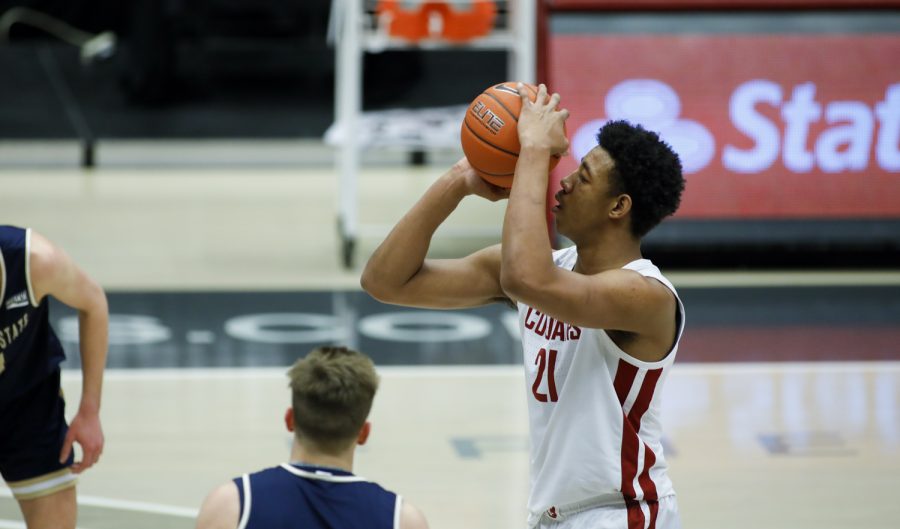 Freshman Dishon Jackson attempts free-throw after being fouled against Montana State on Dec. 18 in Beasley Coliseum.

In an age where WSU tries to revitalize its men’s basketball program, freshman center Dishon Jackson gives fans a great example of what iconic players in Cougar history will look like in the coming years.

The four-star recruit from Vallejo, California was surrounded by basketball his whole life. Both his mother and father played college basketball and both were above average height at 6-foot-4 and 6-foot-7, respectively.

Jackson learned a lot from his parents, but his development as a post-centric big man comes from how he grew up during his years in high school. Jackson used to be a lot shorter than he is today at 6-foot-10, so he learned how to handle the ball more at a young age, and he later developed his low-post mindset.

“If I’m bigger than everybody, it’s easier to score in the post than it is anywhere else,” Jackson said. “Take what they give you.”

Jackson’s post-play at St. Patrick-St. Vincent high school earned him two section titles and one state title before becoming the first-ever player from his school to go directly into a Division I program. Jackson’s proud of his accomplishments and he believes he’s paved a path for the upcoming generations to make the big leap to D-I basketball as he did.

After playing in a winning environment like St. Patrick-St. Vincent, Jackson uses that experience and applies it towards how he can better himself during losses this season with WSU.

Moving to a small town like Pullman was a difficult adjustment after living in an area like Vallejo that has a population of over 120,000 people, Jackson said. But he’s happy to be in Pullman and he feels like he’s in the right place.

When Jackson was recruited by WSU, head coach Kyle Smith and his coaching staff always made sure to be transparent with him. Ever since Jackson arrived at Pullman, that same behavior from the coaching staff has remained true.

“They definitely laid it out for me flat and told me exactly what I needed to do if I wanted to be successful here,” Jackson said. “And you can see the results are kind of happening, slowly but surely.”

Jackson remembers his first day of practice at WSU as a reality check. He referred to the day as a wake-up call that the people he was playing against were faster and stronger than any of his previous opponents throughout his career. This was the first day Jackson told himself that it’s time to turn it up a notch.

Jackson is now a routine starting center for the Cougars this season. Smith referred to Jackson as the best post player on the team at the beginning of the 2020-21 season despite being a true freshman center.

Before getting his first start on Jan. 2 against the Arizona Wildcats, Jackson worked his way through the rotation. He said the process of moving up to the starting lineup was something he wanted to take on. Keeping a level head during his grind kept Jackson in the zone to get into that starting lineup.

“I just looked the challenge in the face, and faced it head-on,” Jackson said. “It’s all on having that steady mindset, you’ll be fine. If you work at something enough, you’re going to see results eventually.”

As a starter, Jackson averages eight points, almost five rebounds and one block per game so far this season. Compared to the rest of the WSU roster and across all games he’s played, Jackson ranks fourth in points per game, fourth in rebounds per game, and second in blocks per game.

Redshirt freshman Brandton Chatfield said Jackson did a better job of putting himself out there for the team socially than Chatfield did during his freshman season. But the thing that sets Jackson apart was his improvement in the hustle stats during the pre-season, Chatfield said.

Chatfield and Jackson push each other during every practice and they’re constantly learning from one another. Chatfield recalled an experience during practice where he and Jackson exchanged some words following a put-back dunk by Chatfield. Jackson wanted to know Chatfield’s thought process during the play and how he could use it to his advantage in the future.

Jackson said he does not have a specific mentor on the team in terms of teammates. However, every veteran on the team has a great mindset in trying to make the team better as a whole, which is something he can get behind every time he walks into the gym.

Jackson’s number one influence as a person, let alone an athlete, is God. As a Christian, it’s something that Jackson takes very seriously as he reads the Bible often. Jackson’s connection with God is the primary influence in his life every day.

“I really take it seriously for me to continue to have a standard of being a good man,” Jackson said. “That’s one thing I really focus on every day, just try to be a better me every day.”

As a freshman at WSU, Jackson said he is in the right place at the right time in order to develop into the player he eventually wants to become.

“He definitely can play above this level eventually, he can definitely make it up in a few years,” Chatfield said. “I think he’ll probably be a starter for a while if he keeps on going the way he’s going.”