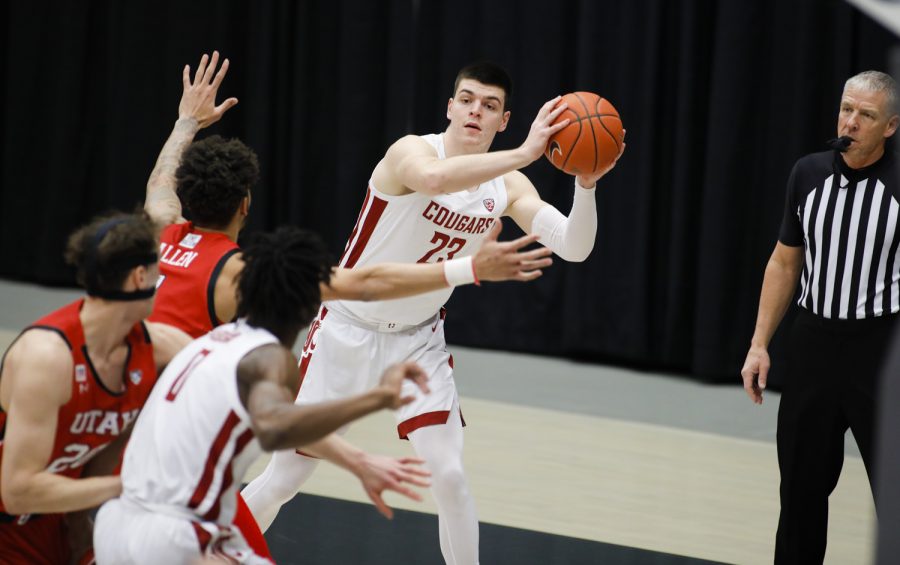 After playing four straight games on the road, WSU men’s basketball returns to Pullman to face the UCLA Bruins in their second matchup of the season at 8 p.m. Thursday at Beasley Coliseum.

The Cougars (11-8, 4-8) suffered their worst loss of the season against the Bruins (13-4, 9-0) in the first matchup on Jan. 14. The 30-point defeat is something the head coach Kyle Smith and the players quickly wanted to forget and leave in the past.

In last year’s home contest against the Bruins, the Cougars defeated them in an overtime thriller. This was WSU’s first win at home against UCLA since 2016. If WSU wins on Thursday, it’ll be the first time WSU has gone back-to-back seasons with a home win over the Bruins since the 2012-13 season and the 2013-14 season.

Senior guard Isaac Bonton had a 23-point performance against the Bruins in the first matchup, but he comes off a dismal performance against the Oregon State Beavers last Saturday scoring just seven points. Smith said Bonton’s been playing fine regardless of his scoring numbers, and he’s done everything he can to get the team going on offense.

Meanwhile, on UCLA’s end, five different players, four of which were starters, scored double-digit points as sophomore guard Tyger Campbell led the charge with 16 points and six assists. At the time of the first matchup, UCLA was number one in the conference standings, now the Bruins are in second place right behind No. 20 USC.

Since playing WSU, UCLA is 3-2 with the two losses coming from Stanford and No. 20 USC. The Bruins would’ve played two more games against Oregon, but the games were canceled due to complications of a COVID-19 outbreak from the Ducks.

Smith said this time around, the Cougars need more of an effort to shut down Campbell if they want to have a shot of taking down UCLA.

“If we don’t do that, it doesn’t really matter what we do,” Smith said. “Let’s see if we can get that done first.”

WSU’s leading scorer in their last game against Oregon State University was sophomore guard Ryan Rapp with 15 points, the first time in his career leading the team in points. Another sophomore forward, DJ Rodman, had a career-high night as well with 14 points.

Despite the good performances from Rodman and Rapp, Rodman said after the game that it came down to the foul trouble that the Cougars had throughout the game.

“We just have to stop fouling, it’s [on] us,” Rodman said following the loss to the Beavers. “You can’t blame the refs at all, you can’t blame anything except for ourselves for being too physical.”

Smith said he’s been behind Rapp’s production off the bench earlier in the season when he went numerous games without making a shot. But now that Rapp has a little bit of rhythm going, the team needs him more now to give rest for Bonton and sophomore guard Noah Williams, Smith added.

For the Cougars injury report heading into the game, freshman center Dishon Jackson is “making progress” according to Smith, however, he did not disclose the details of his injury. It’ll be doubtful Jackson will make an appearance on Thursday. However, junior forward Aljaz Kunc will return to the rotation after missing just one game becuase of a non-COVID related illness.

Freshman center Volodymyr Markovetskyy will likely take Jackson’s spot in the starting lineup until Jackson makes a full recovery. Smith said Markovetskyy’s offensive struggles certainly show during games, but his impact on defense and the plus-minus tell a different story that fans may not realize on the surface.

“He’s been better as a starter,” Smith said. “But we’ll be alright, he’s got some experience starting.”

As the Cougars’ next five games are at home, Smith said it’s certainly weird to have this opportunity in the schedule. But he and his team need to take full advantage of the venue change in the next week and a half to get back on their feet, he added.

Tip-off will be at 8 p.m. PST Thursday at Beasley Coliseum. Fans will not be allowed to attend, but the game will be televised and aired on FS1.