Senior guard Isaac Bonton bounced back from rough game against Beavers; had 26 points 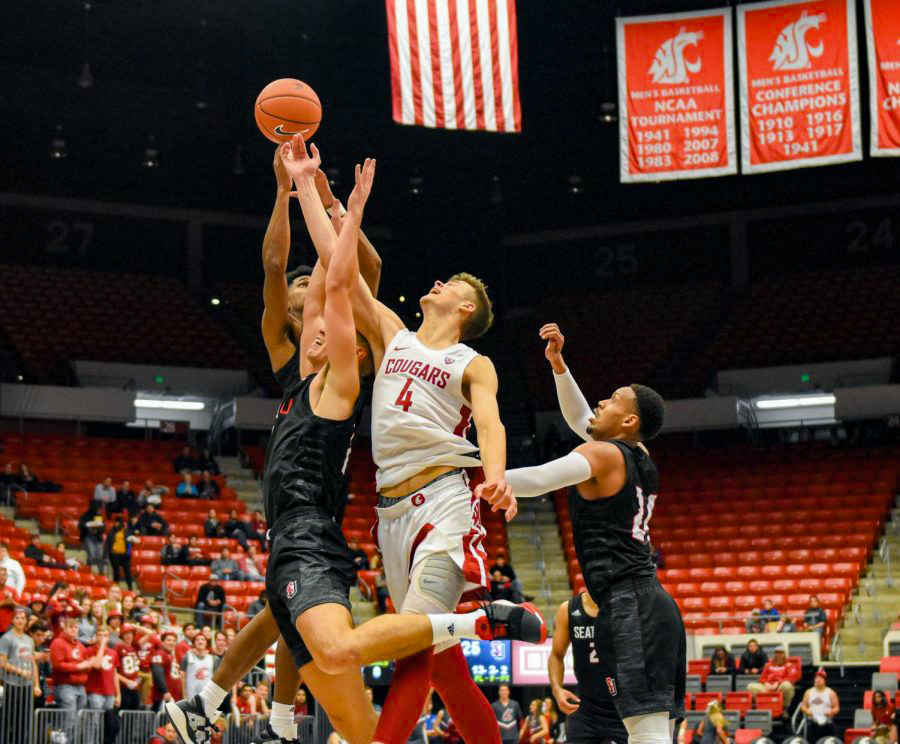 WSU men’s basketball came back home Thursday and took down the UCLA Bruins 81-73 with a breakout performance from the entire Cougar (12-8, 5-8) offense.

After a poor performance against the Beavers last week, senior guard Isaac Bonton came back with a vengeance against the Bruins (13-5, 9-3). Bonton led the team with 26 points and had five assists and rebounds to go along with his stat line.

Bonton said this game was less about rebounding after the loss to Oregon State last Saturday, and more about making sure the Cougars didn’t get ’30-pieced’ by the Bruins again.

“We just wanted to bounce back and show them that we’re tough, we were going to hit them in the mouth first,” Bonton said.

Smith said the reason for the unique lineup was because they needed to downsize a little bit to match up well with UCLA.

Rapp had a career night at the two-guard. He finished the night with just five points, but he nearly had a double-double with assists and rebounds getting eight apiece — both of which are new career highs for him.

Rapp said he enjoyed playing shooting guard tonight for the first time in his career, and that the position change didn’t impact him much when he was out on the court.

“I don’t really see any difference between two and one because Isaac and I always interchange whoever brings [the ball] up,” Rapp said. “I was just making sure I was being a playmaker.”

Smith said Jakimovski had a slight groin injury before the game. He was able to play, but Smith wanted to focus more on getting Jakimovksi back as healthy as possible before their next game.

However, Markovetskyy’s absence was strictly matchup based, Smith said.

Great news for Coug fans as freshman center Dishon Jackson did in fact play a handful of minutes in this one. Jackson, who went down with an ankle injury against Oregon State last week, was doubtful coming into this game, but he managed to finish the night with three points and two rebounds coming off the bench.

It’s not certain that Jackson will return to the starting lineup on Saturday, but he’ll likely play after playing the Bruins.

The duo of Rodman and junior forward Aljaz Kunc came together for 19 points in the first half as both players showed a lot of tenacity on nearly every play they were involved in.

Freshman guard TJ Bamba had a good performance off the bench despite playing just 12 minutes. He recorded eight points, which included two three-pointers.

WSU led UCLA 42-32 at the half to chalk up their first double-digit lead in conference play this season. Bonton led the Cougs with 12 points, seven of which came in the final two and a half minutes of the half.

WSU picked up right where they left off in the second half, putting together scoring possession and stopping UCLA on defense nearly every time they came up the court.

However, the Cougars had a brief stall in their momentum towards the midway point of the second half. At one point, WSU had a 23-point lead, and then the Bruins cut the lead down to 13 just two and a half minutes later.

But once Williams fouled out of the game with 9:29 left on the clock, the Cougars kicked it back into high gear and focused on trying to close out the game. That, with a bundle of circus shots from Bonton, gave WSU tons of momentum and energy in the final minutes of the game.

Despite having an 11-point lead with a little over a minute and a half left in the game, WSU let UCLA gain some momentum on offense to put the Cougars in a little bit of a scare late in the game. The Bruins shifted to an aggressive press defense and managed to cut the lead down to seven with 1:18 left in the game.

Smith said he takes the blame for not preparing his guys well enough to close the game out comfortably.

“I’ve seen it happen to teams that have been up, and they start getting pressed, and they panic, we definitely panicked,” Smith said. “It was nice to have a big lead to take it all.”

However, in the end, the Cougars buckled down in the final minute and took down the Bruins at home for the second straight season. Since Smith has taken over as head coach last season, the Cougars are 2-0 against UCLA at home.

The Cougars will remain at home this weekend to take on the No. 20 USC Trojans at 5 p.m. PST on Saturday at Beasley Coliseum. Fans will not be allowed to attend; however, the game will air on ESPNU.