Team to head to Texas for Matador Qualifier on Feb. 19 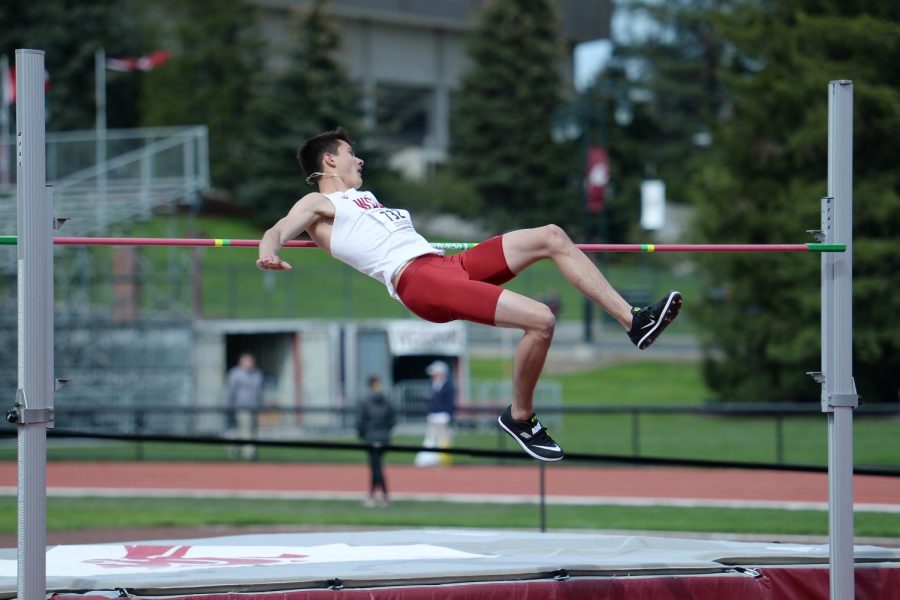 Then-sophomore Mitch Jacobson attempts to clear a jump during a meet April 27, 2019 at Mooberry Track.

The WSU track and field team took their second trip of the season to Seattle as they took on the Washington Huskies in the UW Invitational.

On day one from Dempsey Indoor in Seattle, sophomore Kaylee Sowle and junior Suzy Pace tied for first place in the high jump with a height of 1.71 meters. That is a personal best for both jumpers.

Junior Anna Rodgers took first place in the long jump at 5.69 meters. Sophomore Jasneet Nijjar and freshman Peyton Teevens came in second and third place respectively in the event, both setting personal records of their own.

Two Cougars had personal records in the shot put, as senior Lovely Tukuafu and Teevens set personal bests in the event.

Those who partook in the men’s 5K set personal records as well. Redshirt senior Colton Johnsen clocked in at 13:43.72, while senior Matthew Watkins came in at 14:17.40.

The top five jumpers in that event were all from WSU, as senior Beau Sheeran, sophomore Colby White and sophomore Cody Teevens rounded out the top five.

Junior Jacob Englar came in second in the pole vault at 5.08m, while redshirt senior Seth Andres set a new personal record in the event of 3.88m.

Andres and Teevens both set personal records in the shot put and senior Jerrod Lee set a personal record and a third-place mark in the weight throw for the men.

Saturday was a new day in Seattle, and it started with Nijjar taking first place in the 60m hurdles for the women, with a time of 8.91 seconds. Mackenzie Fletcher and Peyton Teevens were right behind her, coming in at second and third place.

Sophomore Skyler Walton grabbed first place in the women’s 60-meter dash with a time of 7.6 seconds. Fellow sophomore Elise Unruh-Thomas finished close behind her at 7.79.

Freshman Ethan Willems earned second place in the 400-meter race for the WSU men, clocking in at 48.35 seconds.

It was no surprise that all-American senior Sam Brixey blazed his way to a first-place spot in the men’s 60 hurdles, clocking in at 7.8 seconds. Fifth-year senior Nick Johnson followed close behind Brixey, coming in second at 7.94 seconds.

Colton Johnsen ran a mile time of 3:57.39. That was fast enough for a third-place finish.

All in all the WSU track and field team had quite the weekend in the Puget Sound, and they will be back in the “Emerald City” on Feb. 25 for the Husky Classic.

Before that, however, the team will be in Lubbock, Texas, home of the Texas Tech Red Raiders for the Matador Qualifier on Feb 19.