Team will now head to Seattle for matchup against Huskies 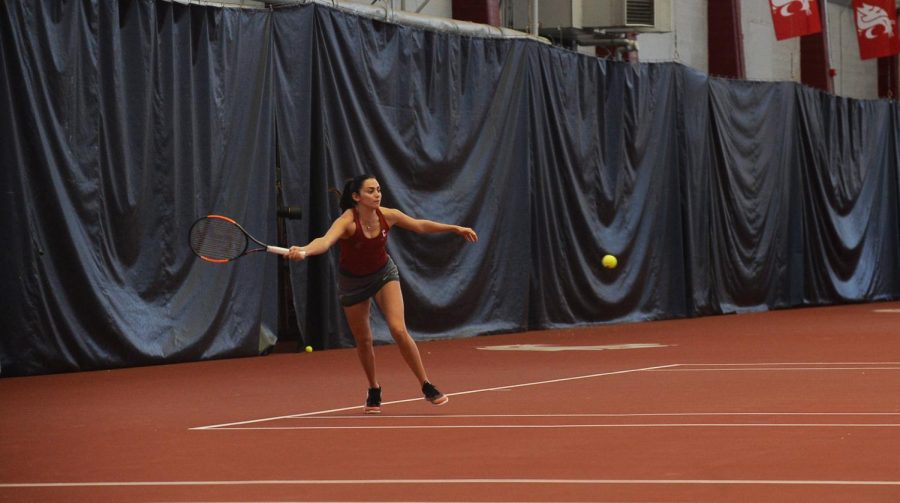 The WSU tennis team traveled to Spokane for a pair of meetings on Sunday. The Cougars faced Montana State and the hosts, Gonzaga, and picked up a pair of wins.

In the first match of the day, the Cougars squared off with the Montana State Bobcats. WSU took the doubles point after the duos of Melisa Ates and Yang Lee, and Fifa Kumhom and Pang Jittakoat picked up wins in their respective matches. The pairing of Michaela Bayerlova and Hikaru Sato saw a rare doubles loss in this match.

The singles match went in favor of the Cougars as well, as every single match was won by WSU. Bayerlova, Sato, Kumhom, Jittakoat, Ates and Savanna Ly-Nguyen each picked up wins so WSU could pick up a 7-0 win over the Bobcats.

In the second match of the day, the Cougars got their shot at another in-state school when they faced the hosting Gonzaga Bulldogs.

The doubles point went to WSU once again, but this time, the Cougars swept the three matches with the same pairs competing.

In the singles matches, Bayerlova, Ates and Ly-Nguyen each picked up the first three singles points to put WSU up 4-0.

However, after that, Gonzaga took the final three matches against Sato, Kumhom and Jittakoat to close the final scoreline to 4-3.

Overall, WSU looked strong on the court once again as they continue to pick up momentum with their fourth straight win.

Melissa Ates was the only Cougar to go 4-0 that day. Ates did not drop a single set all day and beat her opponents by a combined score of 36 games to 17.

Additionally, Lee had a perfect day for WSU, as she competed in only doubles and won both of her matches.

The Cougars will look to keep their hot streak going as they head to the west side of the state for a couple of matches this weekend. They will face the 5-0 Washington Huskies on Saturday and the 8-1 Baylor Bears on Sunday.