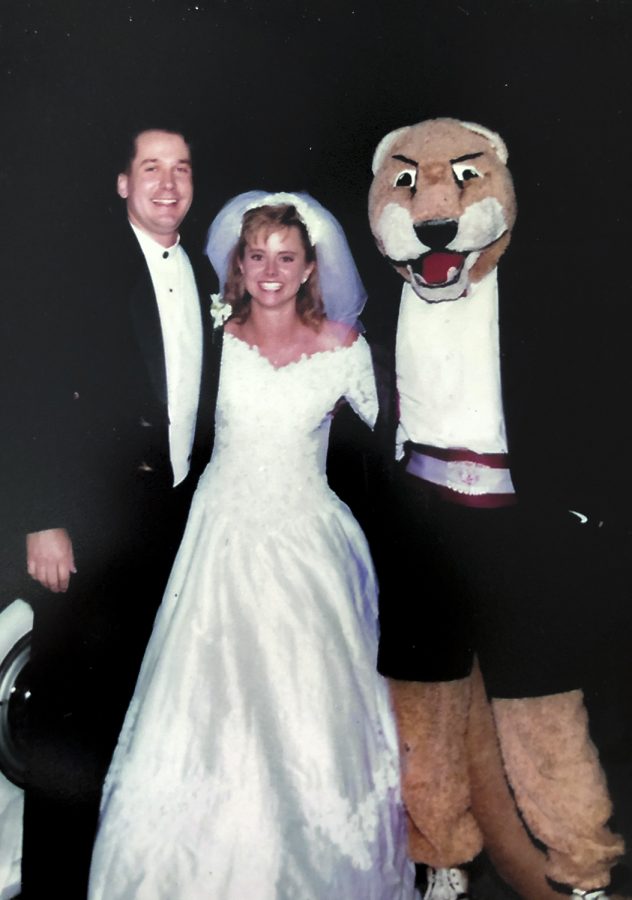 Michele Kophs’ husband knew he married into a Coug family when Butch made a special appearance at their wedding.

Gary Petersen, a 1965 Coug alum and Michele’s father, planned the whole event. He contacted an old friend and asked him to wear the Butch costume with a tuxedo.

The Cougar mascot made a grand entrance in the couple’s limousine, Petersen said.

When Kophs’ husband asked to marry her, his family, who happen to be University of Washington alumni, wore their alma mater gear as a joke.

“The only way I get even is with good humor,” Petersen said.

For the Petersen family, ties with WSU run deep. Brothers, sisters, nephews, daughters, granddaughters and cousins have attended the university, he said.

His granddaughter, Ashley Kophs, will be the first grandchild to graduate from WSU this spring.

Petersen served in the Korean War for over three years as a foreign correspondent until 1962. He quickly realized he wanted an education, specifically in journalism.

“There was no question in my mind, so as soon as I got out of the military, I packed up my bags and moved to Pullman,” he said.

At the time, about 5,800 students attended WSU. Everyone knew each other in some form, Petersen said.

When he was a student, Petersen said he spent many nights working to produce a newspaper for The Daily Evergreen as managing editor. He worked with the since-dismantled Pullman Herald to print copies of the paper.

Petersen used his editorial power to change university policy for female students. During his era at school, female students had to be in their dorms or sororities by 10 p.m. every night, Petersen said. They could stay out until midnight on weekends.

As managing editor, Petersen said he presented to the WSU Board of Regents and gained approval to abolish what was called ‘women’s hours’ for anyone over 21.

He continued to use his journalism degree after graduation to help Nobel Peace Prize-nominated scientists and congress representatives produce well-written documents, Petersen said.

Kophs graduated in 1993 with a bachelor’s in advertising and a minor in fine arts.

Kophs said she first fell in love with Pullman as an eighth-grader when she attended a WSU football game with her father.

“I didn’t even consider other options because I knew that’s where I wanted to be,” she said.

As a freshman living in Stephenson North, Kophs said she remembers when a couple of students stole a five-legged cow from the WSU Veterinary program. They put the cow into the elevator at Stephenson North, which scared the animal, causing it to make a mess for the custodial staff to clean up.

A decade or so later, she said she accompanied her incoming freshman daughter to Alive! Orientation, where they stayed in the Stephenson complex.

Kophs and her husband, now residents of Vancouver, Washington, have two daughters attending WSU. Kophs hopes her son will attend WSU, as well.

“The best part of WSU is the culture and the moments, so it’s sad, especially for my senior daughter, to see how different this year has been,” she said

Kophs stayed connected to the alumni network in both her personal and professional life.

She is active in the WSU Alumni Association. As her children grew up, she brought them to events like holiday parties, football game watch parties and Wreaths Across America. Two years ago, the family visited a local cemetery and laid wreaths on the tombstones of veterans, she said.

“It’s one of the few schools in the U.S. that actually is not in a huge town,” Petersen said. “The little town of Pullman supports the college, not the other way around.”