Search for the greatest: Unknown Pleasures

Joy Division's most popular album, second to last album made with Ian Curtis 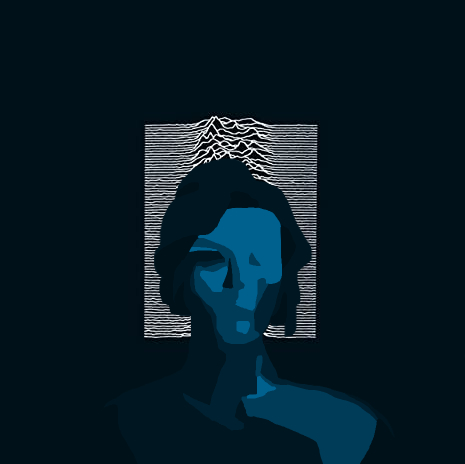 In 1967, the Interplanetary Scintillation Array of the Mullard Radio Astronomy Observatory in Cambridge, UK discovered a pulsar in the constellation of Vulpecula. The observatory recorded the radio waves, and the pulsar became known as CP 1919. The diagram of these radio waves became more than just a scientific diagram once artist Peter Saville picked it out of an encyclopedia for an album cover. Once Peter inverted the diagram to white-on-black, the pulsar waves became an embodiment of one of the coldest albums ever created.

Joy Division is an English rock band formed in the city of Salford in 1976. The band came into existence once guitarist Bernard Sumner and bassist Peter Hook met at a Sex Pistols concert. After placing advertisements all around local music shops, they picked up vocalist Ian Curtis and drummer Stephen Morris. The band started as a punk band but eventually formed their sound into something darker over the years. They released their cult classic, “Unknown Pleasures,” in 1979 under Factory Records.

Most of the songs on the album revolve around the thoughts and experiences of vocalist Ian Curtis. Throughout his years with the band, Ian battled severe depression and epilepsy, which would ultimately lead to him taking his own life in 1980. His epilepsy became so austere that he averaged about two seizures per week, and he suffered frequent injuries from them. During his live performances, he would perform dance moves akin to his seizures. Spastically flailing his arms around while singing songs that expressed inner experiences. He references his condition in “Disorder.”

It’s getting out of hand

On the tenth floor, down the back stairs

It’s a no man’s land

Lights are flashing, cars are crashing

I’ve got the spirit, lose the feeling

Let it out somehow”

…as well as in “She’s Lost Control,” a song inspired by a woman Curtis once met with a similar epilepsy condition.

“And she screamed out kicking on her side and said

And seized up on the floor, I thought she’d died, she said

Curtis’s condition left him severely depressed. He started to form severe drinking and smoking problems as a coping mechanism for his pain. Most of the songs on the album reference his thoughts of suicide, which carry even more emotional weight due to his unfortunate death a year after the album’s release. He expresses his suicidal thoughts in tracks like “New Dawn Fades.”

“Directionless so plain to see

Not only do the lyrics of each track reflect Ian’s troubles, but the production and composition reinforce his bleak mood. Each track is shrouded in reverb, creating an atmosphere akin to a deep cave. Hook’s bass tone is incredibly deep and monotone, with tracks like “Disorder” and “New Dawn Fades” showcasing his creative compositional skill. The keyboard and guitar playing of Sumner in tracks like “She’s Lost Control” and “Interzone” showcase his ability to create dark yet catchy riffs. None of Bernard’s riffs come close to the genius of “New Dawn Fades,” where he constructs a moody intro riff with only five notes. Finally, Morris’s talents on the drums are on full display in fast-paced tracks like “Disorder” and “Interzone.”

The result of each band member’s contribution morphed into a staple in the history of music, helping to expand the punk movement into something artsier and more emotional. The album’s pessimistic undertones help cement this album into the history books and lead to creating one of the most haunting expressions of mental health ever conceived. Curtis became a martyr to inspiring musicians and bands like U2, The Cure, Interpol, Soundgarden and more. Unfortunately, his incredible songwriting ability was buried with him.