Opening day is upon us 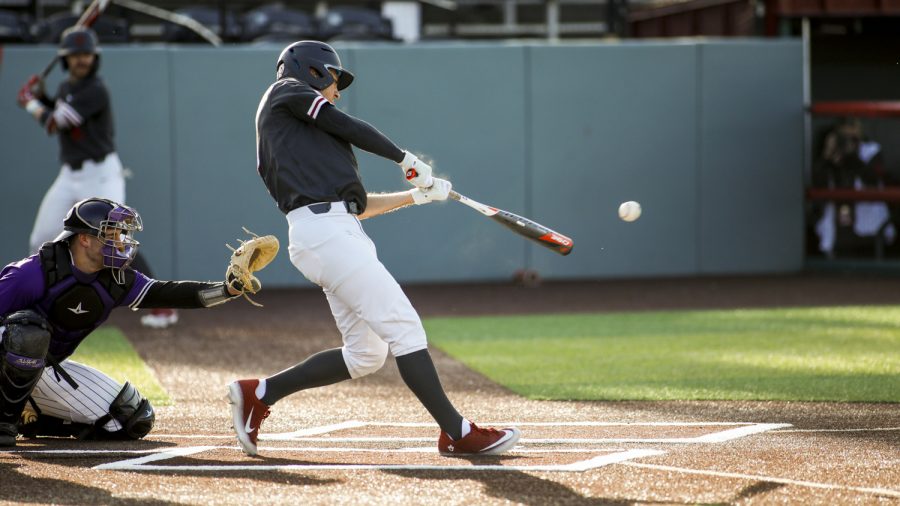 Then-junior outfielder Gianni Tomasi hits the ball during the game against Niagara on March 5, 2020 at Baily-Brayton.

It has been 345 days since Division I college baseball has seen a competitive game take place, but that all changes this weekend, as teams get back on the field, aluminum bats crack against baseballs.

College Opening Day is not as widely celebrated as the professional version is, but after a nearly year-long wait, Feb. 19 will have all eyes on diamonds across the country to watch student-athletes play the American Pastime.

There are currently 97 Opening Weekend series scheduled in Division I. That includes the State Farm College Baseball Showdown at the Texas Rangers’ brand new Globe Life Field. The tournament will feature six teams all ranked within the D1Baseball Top 10.

The only other ranked on ranked matchups on Opening Weekend is No. 1 Florida hosting No. 21 Miami. The Gators closed the shortened 2020 season on top of every major poll and will be looking to come out of the gates strong with a ranked opponent in their opener. The Hurricanes also started last season in the Top 5 of every poll, aside from ESPN, and finished the year No. 7 with an 11-4 record.

No. 18 Duke hosts the 2016 National Champions, Coastal Carolina, on opening weekend as well, in a Carolina match-up that should bring some eyes from around the nation.

Two Pac-12 teams open their 2021 campaign in the Top 25, as UCLA is the second-ranked team and Arizona is sitting in the No. 22 slot. UCLA will host San Francisco and Arizona will host Ball State for their first series of the year.

Elsewhere in the Pac-12 are the one and only Washington State Cougars, who come into the year expected to finish second from bottom in the Pac-12 by D1Baseball. The Cougars will be unveiling their brand new “Project BTO” renovations to Bailey-Brayton Field, but not until an April 1-3 series against the Stanford Cardinal, who are projected to finish just one spot ahead of the Cougars.

The Cougars will be expecting a lot out of preseason All-American Kyle Manzardo this season as they look to turn the corner from last season.

Two years ago, WSU finished 11-42-1. Last year, before the season was canceled, the Cougars were already to 9-7. Coach Brian Green will be looking to continue the turnaround and has the pieces to be a team that finishes in the top half of the Pac-12 if they are able to gel properly.

The Cougars start the season in California with a series against UC Davis.

If you want to watch some of the other local squads this weekend, the Gonzaga Bulldogs will be heading to Surprise, Arizona for the College Baseball Classic against Oregon State, Kansas Staten and New Mexico.

Additionally, the two teams on the west side will both also go on the road as the Seattle Redhawks travel to Portland for a series with the Pilots. The Washington Huskies will travel even further south to Houston for a trio of games against Houston Baptist, Rice and Little Rock.

No matter where you are turning your attention on Opening Day and the rest of Opening Weekend, the beginning of baseball is a joyous occasion. Find a game somewhere and turn it on in the background while you work on homework or cook dinner. Just make sure you have some baseball on this weekend.