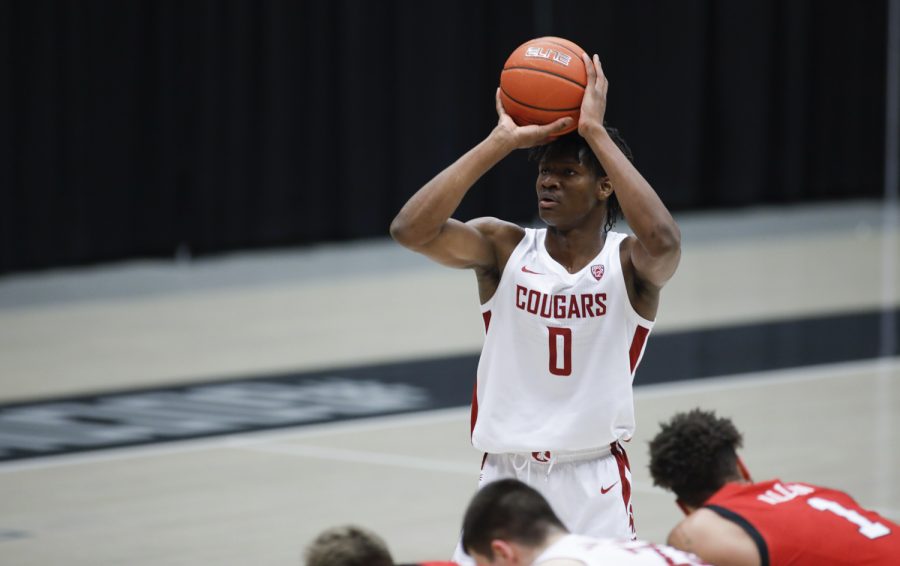 Freshman forward Efe Abogidi shoots a free-throw during the game against the Utes on Jan. 21 in Beasley.

WSU men’s basketball fell to the Washington Huskies 65-63 off a last-second layup from the Huskies’ (4-16, 3-12) point guard Marcus Tsohonis with two seconds left on the clock.

WSU’s (12-10, 5-10) leading scorer was junior forward Aljaz Kunc who scored 14 points off the bench, tying his career-best. This is also the first time Kunc has led the Cougars in scoring in his career. Kunc said he’s just taking advantage of the open looks that his teammates give him and making the most of them.

Head coach Kyle Smith said he’s really proud of Kunc’s performance and how he’s bounced back into the lineup as of late.

“He hadn’t blinked an eye,” Smith said. “But he’s kept a good attitude, good poise, it’s nice to see him really grow up.”

Senior guard Isaac Bonton did not play for the Cougars as he is still out with his ankle injuries from WSU’s last game against No. 17 USC. Sophomore guard Ryan Rapp took his spot in the starting lineup and finished the night with five points on 28 minutes played.

Kunc said the team missed Bonton’s defensive talents more than his scoring ability. Smith said he doesn’t know when Bonton will be back.

Sophomore guard and Seattle native Noah Williams got to face his not so beloved Huskies, and he probably wished for a better outing. Williams finished the night with 12 points, seven of which coming from the free-throw line, as he shot 2-9 from the field.

This game started off slow as it took WSU over four minutes to score their first points. Washington had a slow start as well but pieced together some momentum on offense in the following minutes. WSU got in a groove later on in the half and got their first lead of the game with a little over seven minutes left in the half.

That lead from WSU would be short-lived, as the Huskies regained their energy on offense and retook the lead. WSU could not maintain possession of the ball consistently. The Cougars had 13 turnovers in the first half, a new season-high.

Washington held a 36-26 lead at halftime, and Tsohonis already had 16 points for the Huskies.

Once the second half started, WSU resumed their comeback attempt with another slow start on offense. Rapp and Jackson had some foul trouble early in the second half, picking up two fouls apiece in the first seven minutes or so. Rapp would eventually foul out of the game with less than a minute left on the clock.

Fouls were the main obstacle in WSU’s comeback attempt as the Cougars were called 13 times for fouls in the second half alone. The team had just five fouls in the first half.

Smith said there were some questionable calls, but he wasn’t too fazed about the foul-calling in favor of Washington.

The final minutes were really interesting as the Cougars tied the game up with just under six minutes to go. Washington kept stretching out a lead and forcing turnovers from WSU, but Washington could consistently make a shot to extend the lead further.

After a series of free-throw shenanigans from both sides, Washington was up by two with 15 seconds left. Williams ran up the court for WSU and sank a contested layup to tie the game at 63, but a lackluster defense from WSU on the other end gave Tsohonis an open look down low to seal the game.

WSU tallied 19 total turnovers against Washington, which is a new season-high. Smith said a good portion of the turnovers came from whistles; however, you can’t win a game with that many turnovers.

Kunc said the team needs to forget this game as soon as possible in order to get back on the right track before the team’s next contest.

“We just got to have a short memory, just forget this game, it’s behind us already,” Kunc said.

WSU will host the California Golden Bears at 7:30 p.m.  on Thursday at Beasley Coliseum. Fans will not be allowed to attend; however, the game will air on the Pac-12 Network.