‘Every statistic is a real person’ 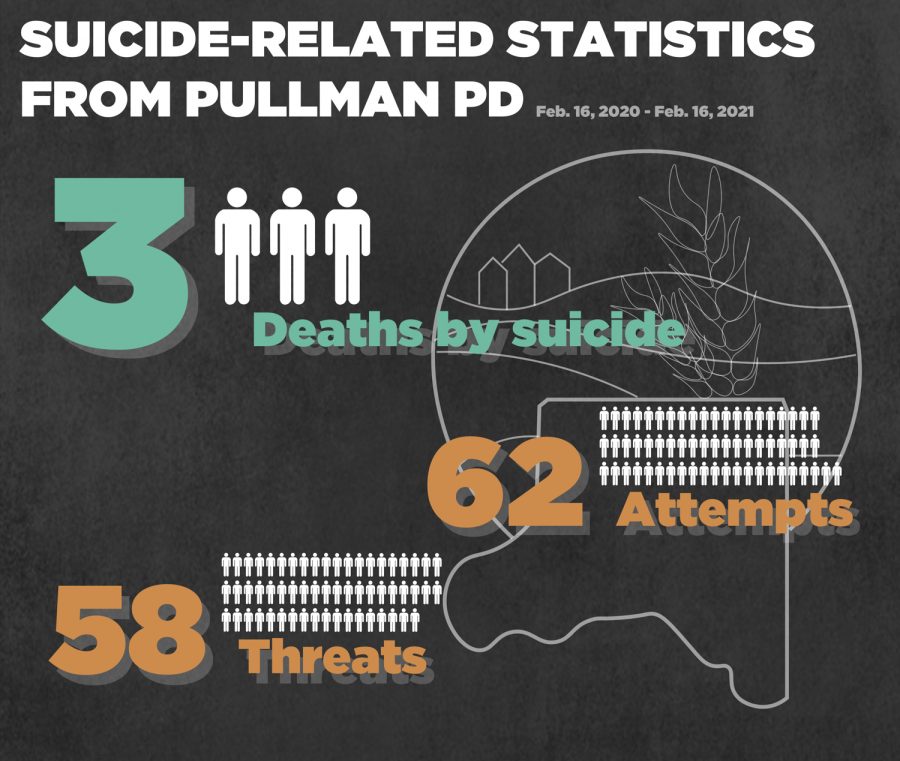 Editor’s Note: This story is part of the news section’s Mental Health Series and contains themes of suicide and other mental health issues. If you need help, please contact the National Suicide Prevention Lifeline at 800-273-8255. If you would like to share a story idea for the Mental Health Series or would like to share your mental health experience, please email news@dailyevergreen.com.

The Pullman Police Department responded to five suicide-related incidents during Valentine’s weekend, one of which resulted in a death.

“We’re really on the frontline of dealing with these mental health issues,” said Pullman PD Cmdr. Jake Opgenorth. “And it’s only going up.”

Pullman PD is investigating one death by suicide and transported four individuals who attempted suicide to Pullman Regional Hospital, he said.

The four individuals taken to the hospital include two females in their 20s, a male in his 20s and another adult female, Opgenorth said.

This last weekend was hard on officers; it is not easy for them to respond to these crises, he said. The department will typically receive one call a weekend regarding a suicide-related incident but never this many at once.

Police officers are humans and cannot help but be affected by an individual’s emotions in those moments, Opgenorth said. Pullman PD offers counseling services to its employees and supports them through any issue they might have as well.

Ultimately the individual feels like suicide may be the only way to stop their pain, he said.

Suicide-related incidents often get called in as welfare checks. Suicide hotlines do not usually gain enough information about an individual or their location to give to officers. Because of this, only a portion of calls to the hotline are routed to Pullman PD, Opgenorth said.

A welfare check will occur when friends or family call Pullman PD. They are worried about the individual’s statements or behaviors, requesting that officers check on the individual, he said.

“We are not the solution,” Opgenorth said. “But we’re the department that tends to deal with it.”

Officers enter the situation without much information and try to assess the crisis from there, Opgenorth said. When responding to a suicide-related report, officers would determine whether the individual may have a plan in place to harm themselves.

If the individual expresses a suicidal intent or already attempted suicide, the department will place the individual in protective custody and transport them to Pullman Regional Hospital, he said.

The most challenging part of addressing a suicidal individual is basing actions on the evidence available, knowing the result is an effort to help that individual, Opgenorth said. If officers have to take an individual into protective custody, it is ultimately for that individual’s benefit.

Individuals transported to the hospital are typically cooperative and appreciate the help Pullman PD is providing. If an individual with suicidal intent refuses care or does not cooperate with officers, a level of force may be used to help transport them to medical facilities, he said.

Once officers transport the individual to the care of mental health professionals at the hospital, the case is out of Pullman PD’s hands. Officers typically do not follow up with the individual unless another crisis takes place, Opgenorth said.

Despite this, officers would respond to any individual’s need for help if they wish to contact the department after the initial incident, he said.

“We’re never gonna rise to the level of a mental health professional and the amount of training they have,” Opgenorth said.

There are currently no police departments in the county with mental health professionals responding with officers, but Opgenorth said he would be interested in seeing this happen for Pullman.

Officers will often input multiple codes for cases, so other related incidents may not have appeared in his database search for suicide-related statistics in that year-long period, he said.

The last time he compared data from recent years to see if the pandemic had a significant impact, Opgenorth noticed a slight decrease in statistics. He said this decrease could be due to Pullman’s constantly changing population that makes sampling difficult.

Whitman County Coroner Annie Pillers said suicide rates for Whitman County remained consistent over the last few years. This constant rate does not mean there have not been any changes recently.

Pillers said she noticed a low point for the data around 2016 and a high in 2020, but these changes are too insignificant to recognize as a developing trend. It is hard to tell right now if the COVID-19 pandemic has any impact on suicide statistics.

The most common method of suicide in Whitman County is a self-inflicted gunshot wound, then death by hanging, followed by intentional overdose, Pillers said.

“There is never any absolutes,” Opgenorth said.

Pillers said she and the suicide prevention task force she works with will regularly review this data over the next few years to better understand the causes of significant changes in suicide rates.

The community-based task force was created in 2019 and serves two primary functions: to build resilience to suicidal tendencies and to increase suicide prevention outreach to Whitman County communities, she said.

“We’re talking about what that looks like, and I think that’s something,” Pillers said.

The suicide prevention task force works with WSU and other local agencies to distribute information cards with tips for people who may be struggling with suicidal tendencies, she said. Within weeks of making 5,000 cards, they were all distributed to the community.

More cards are in the process of being made and distributed, Pillers said.

“The task force is about a community of communities,” she said.

There are different versions of the card. The first is for individuals contemplating suicide, and the other for those who are actively planning suicide. Both cards include tips for that individual’s situation, as well as national and local hotlines for mental health resources, Pillers said.

Pillers said men account for around 86 percent of completed suicides in Whitman County.

Corey Laughary, community chaplain and mental health first aid instructor, said suicide is the most preventable cause of death. Suicidal tendencies can be recognized in advance and are often seasonal or episodic.

“Every statistic is a real person,” Laughary said.

Laughary works on the suicide prevention task force with Pillers. His role in the task force is providing mental health first aid programs to the community for both adults and youth. He instructs those programs both inside and outside Whitman County.

He became motivated to become an instructor after losing someone he knew to suicide. Laughary said he grew up without much knowledge about mental health issues but asked himself what kind of individual he wants to be and if he could have done anything to help the individual he knew.

“They often die suddenly, in a lot of pain,” he said.

Pillers said the community is not doing enough sometimes, but society can change this. An individual can help someone with suicidal tendencies by listening and being supportive in moments of struggle.

Sometimes people feel they are not a sufficient resource to help those in need, but Pillers said just being there for the individual is enough.

Suicide is a very personal matter, she said. For the task force to understand it, they must work closely with the community.

Mental health issues need to be normalized to remove the stigma that prevents many people, especially men, from voicing their struggles. Society can do this by removing criminal language from conversations about suicide, Laughary said.

The correct way of speaking on this type of death would be to say the individual died by suicide; society needs to eliminate its use of the word “commit” when addressing the issue, Laughary said.

This word “commit” leads people to subconsciously see suicide as a criminal act when in reality, it is the furthest thing from it. An individual struggling with their mental health can feel stigmatized by this language, Pillers said.

“No ruling of a death is taken lightly,” she said.

Struggles with mental health are prevalent. The majority of people will feel this way at some point in their life, so people must speak about these difficult topics publicly to normalize them and prevent more suicides from happening, Pillers said.

The best part of the job, she said, is meeting the most incredible people and hearing stories about their loved ones. There should be no judgment or fear in this position.

People die every day in all different kinds of ways, she said. What can hurt family and friends the most after a suicide is the lack of truth before death. When an individual dies before letting others know what they are going through, it is hard for families to understand their loved one’s death.

Pillers sets aside the hard parts of her job and focuses on the good aspects. Though it can be hard at times, it is very privileged work, she said.

Everyone can be a part of ending the stigma and addressing the community’s struggles with mental health. Be present when listening to others and allow them to voice their struggles in a judgment-free environment. Offer additional resources for support if you can, Pillers said.

If a loved one does not feel comfortable calling a hotline, sit with them and make the call for them, she said.

If you need help, please contact the National Suicide Prevention Lifeline at 800-273-8255.