Basketball gets set for Golden Bears 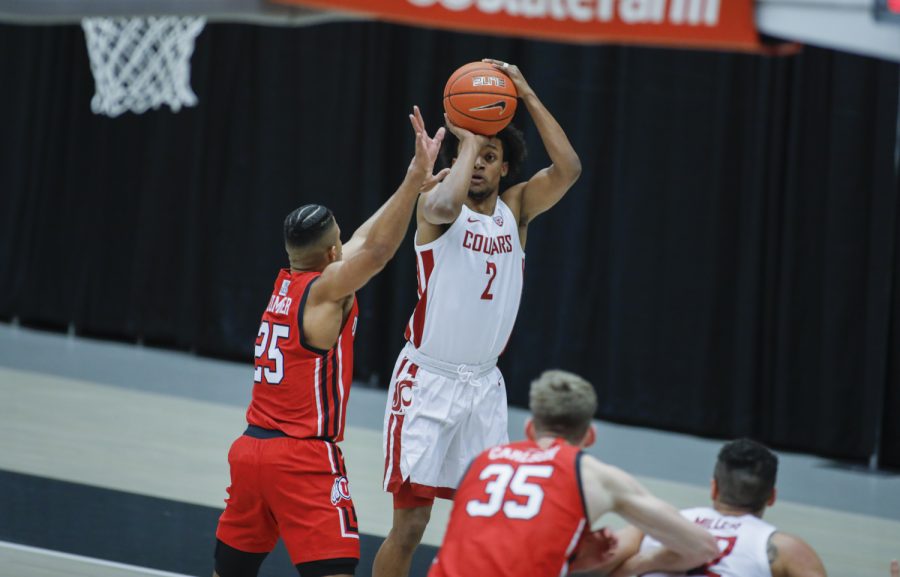 Junior guard Myles Warren shoots the ball during the game against Utah on Jan. 21 at Beasley Coliseum.

WSU men’s basketball will host the second leg of their season matchup with the California Golden Bears 7:30 p.m. Thursday at Beasley Coliseum.

In the last game between these two schools, WSU (12-10, 5-10) defeated Cal (8-15, 3-13) 71-60 with efforts from senior guard Isaac Bonton, sophomore guard Noah Williams and freshman center Efe Abogidi as the three made 45 points for the victory. Bonton led the way with 22 points.

Bonton did not play in WSU’s previous game against Washington because he is still nursing a pair of rolled ankles from their game against No. 17 USC. WSU head coach Kyle Smith said Bonton’s status for this week’s game against Cal is still unknown.

“I don’t [know] at this time,” Smith said. “He’s icing rehab, and hopefully getting better, getting healthier.”

Last time WSU played Cal, the Golden Bears’ leading scorer this season, senior guard Matt Bradley, did not play due to injury. Since Bradley’s been back from injury, he’s averaging 20.8 points and 4.5 rebounds per game.

Smith said he thinks Bradley is one of the best scorers in the country, let alone the conference. Cal will be a different team with Bradley this time in the rotation, and WSU will have their hands full on defense.

“He doesn’t need a screen or anything, he just needs the ball in his hands,” Smith said. “Really tough cover. It’ll be a team effort to try and slow him down, you’re not going to stop him.”

Smith tied Bradley’s impact with Washington’s guard duo, Marcus Tsohonis and Erik Stevenson, putting up a ton of points on WSU last Monday. The Cougars cannot afford to give up that many points to the guard position.

WSU played four games over the past nine days: against Oregon State on Feb. 6 and against Washington on Feb. 15. Smith said these games were good for the team mentally, but physically the team could use some rest, especially in the backcourt.

Smith sees the inside game for WSU as one of the main opportunities on offense versus Cal. The Cougars need to assess their turnover issues when feeding the post and make sure to feed freshman center Dishon Jackson and Abogidi as much as possible. As Jackson’s conditioning was put into question by Smith before, he is surprised at how much Jackson evolved as a true freshman starter.

WSU wants to also make sure Jackson and Abogidi are well equipped in the post with outside shooters around the perimeter who are ready to make their shots. One of the shooters Smith mentioned was junior forward Aljaz Kunc.

Kunc, who comes off the bench, has put together a string of productive performances as of late. He’s averaging 11 points and two three-pointers per game in the past four contests, and Smith sees him as a viable threat on the perimeter as a stretch forward.

“I just get open looks, my teammates set me up with good shots,” Kunc said following the loss to Washington on Monday. “It’s just up to me to knock them down.”

WSU was swept in last season’s matchups with Cal, and the Cougars have the opportunity to sweep Cal this season. WSU has not swept Cal in a season series since the 2017-18 season and has not won at home since January 2019.

“They’ve been good at just competing the whole year,” Smith said. “It’ll be a good test for us.”

Tip-off is at 7:30 p.m. Thursday at Beasley Coliseum. Fans won’t be allowed to attend, but the game will air on the Pac-12 Network.