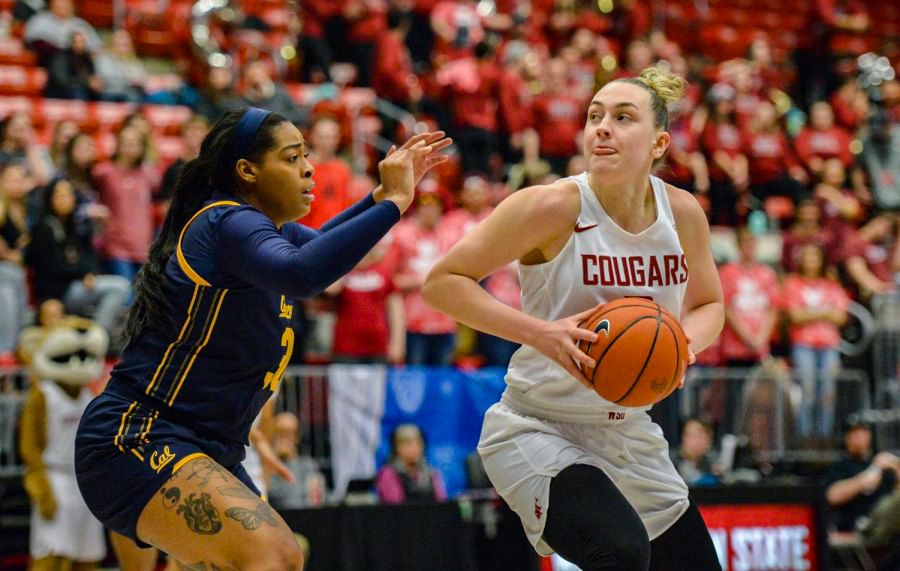 The WSU women’s basketball team will be staying home this weekend as they get set to host the Rocky Mountain schools.

The Cougars (9-9, 7-9) will tip off against Colorado (8-9, 6-8) at noon Friday in hopes of sweeping the Buffaloes this year. They will lace back up at noon Sunday to host the Utah Utes.

The Cougars are currently coming off of a 67-61 loss on the road against the Arizona State Sun Devils. That was the team’s last scheduled road game of the 2020-21 season. WSU will play their final three games at home in Beasley Coliseum.

WSU and Colorado faced off in Boulder on Jan. 3, and WSU breezed past the Buffaloes 76-63. Redshirt senior guard Krystal Leger-Walker led the Cougars in scoring in that game with 25 points.

Since that victory, however, the Cougs have hit a rough patch, and are gritting their teeth in order to finish the season strong.

The team has played eleven games since their showdown against the Buffaloes, but only three of them resulted in wins. Oddly enough, two of those three wins were against teams ranked in the AP Top 10.

The Cougars currently find themselves riding a three-game losing streak, where the team has now allowed themselves to be outscored by their opponents.

The WSU offense will manage 65.4 points per game, and the defense lets up an average of 66 points every contest. This is the first time this season that WSU has held a negative scoring margin, and the team looks to correct it heading into the final stretch of their schedule.

Since the first matchup, Colorado has four wins out of only eight games played. The Buffaloes have had four games postponed due to COVID-19. All of those matchups were against teams ranked in the AP Top 10.

Oddly enough, Colorado has collected wins against Stanford and USC. Those are two teams that WSU struggled against when they hosted those schools.

The Buffaloes’ offense has mustered 66 points per game this season, while the defense has stood strong and allowed an average of only 62.

Both schools hold a field goal percentage of about 40 percent on the year, and both teams shoot the ball around 30 percent from downtown as well.

WSU and Colorado both have trouble keeping possession of the ball, and average 15 turnovers a game. However, both schools make up for it on defense by forcing more turnovers than they give up.

The game on Sunday against the Utah Utes should share similar characteristics as the game against Colorado.

WSU and Utah faced off in Salt Lake City on Jan. 1 in both side’s first game of the new year. The Cougars took down the Utes 79-74 in that one.

Since the loss, Utah has won three out of their last 11 games just like WSU, along with two postponements on their schedule. Again, just like WSU.

To complete the cycle of similarities, Utah is also on a three-game losing streak, and the Utes have not cracked 60 points on the scoreboard in either of those losses.

Utah only musters 61 points per contest, while their defense has bent all season, allowing an average of 71 points per game.

The 79-point performance that the Cougars posted last time against the Utes is the most points that the Cougar offense has scored in a game all season.

The Cougars look to sweep the Rocky Mountain schools before playing their final game of the season against Washington on Feb. 28.

WSU’s weekend at Beasley starts at noon on Friday against Colorado. Following that game, at noon Sunday WSU will host the Utah Utes, tip-off for that game is also at noon. Both games can be streamed on Pac-12 website.