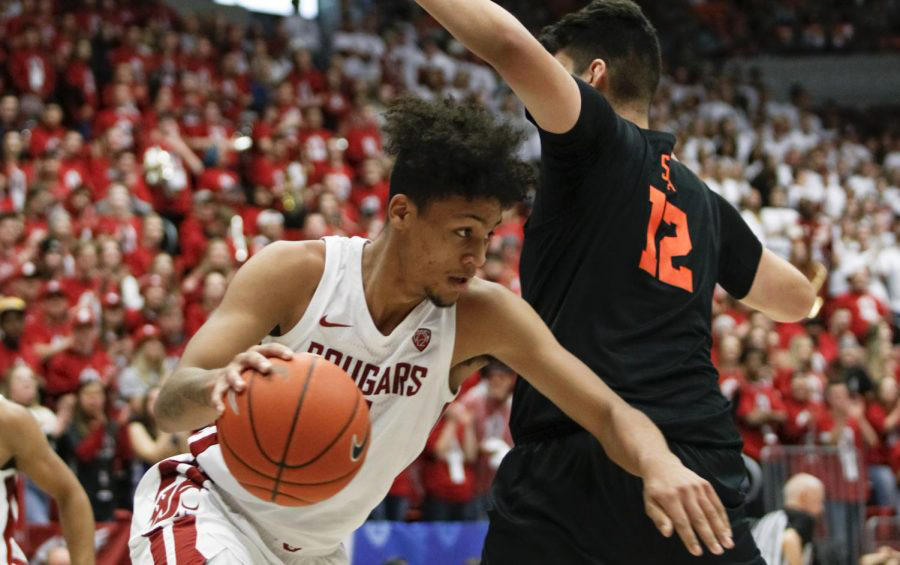 Sophomore guard Noah Williams and freshman forward Andrej Jakimovski had career performances and led the charge for WSU. Both Williams and Jakimovksi were on the verge of obtaining a triple-double.

Williams finished the night with a career-high 32 points, nine rebounds, seven assists, and three steals. Williams said he was really down after the loss to Washington on Monday and he’s glad the team could bounce back this way against Cal.

“I came in with a chip on my shoulder tonight for sure,” Williams said. “I just had to bounce back, my teammates helped me, it was a great team win.”

Jakimovski finished the night with 11 points, seven rebounds, and nine assists, all of which he did in his return to the starting lineup. He said he’s happy he could put together a great performance following the recent struggles of his injuries.

“I want to make plays for my teammates, and head coach Kyle Smith told me to play like a guard this game,” Jakimovski said. “I’m happy for the victory, we had an amazing team effort, and it’s on to the next one.”

Senior guard Isaac Bonton did not return to play against Cal as he’s still nursing his ankle injuries. On top of that, sophomore guard Ryan Rapp did not play either due to a knee sprain. Smith said he’s questionable on Rapp’s return for WSU’s next game. Bonton, on the other hand, is still in the rehab process and there isn’t a dramatic change to his status.

Smith said he vaguely remembers a time as an assistant coach for Saint Mary’s where he had multiple players approach a triple-double, but not as a head coach.

Williams’ dad and former Cougar point guard, Guy Williams, once scored 43 points in a game for WSU during his career. Smith said Williams was trying to get back into the game in the final minutes to either achieve a triple-double or approach his dad’s career-high in points, but Smith wanted to keep him rested for WSU’s next game.

Williams said he really wanted to approach his dad’s point total, but he’s blessed to have the opportunity towards matching that total.

“I wanted to beat that, but I couldn’t,” Williams said. “It feels great, it’s a blessing, and I’m here to keep on going. I want to beat it.”

Freshman guard TJ Bamba made his first career start in place at the two-guard while Williams took over for the injured Bonton at point guard.

The first half was nothing short of spectacular for Williams as he put up 24 points in the first half alone, which already surpassed his career-high. On top of his performance scoring the ball in the first half, Williams had three boards and four assists, which included a no-look assist to freshman center Efe Abogidi who posterized a Cal defender at the end of the exchange.

At halftime, WSU went into the locker room with a 22-point lead over the Golden Bears. The Cougars put up 48 points, a new season-high for first-half points as a team.

As the Cougars put the game into cruise control in the final minutes, both Jakimovski and Williams went to the bench to cap off their career nights. WSU finished the night with new season highs in assists with 22, and field goal percentage with 51 percent.

Smith said there were almost zero faults from his team against Cal, and he obviously wants to see more games like this in the future.

WSU will host the Stanford Cardinal next for possibly their last home game of the season as it depends on the rescheduling of the Cougars’ canceled game against Arizona State from earlier in the season. Tip-off will commence at 1 p.m. Saturday at Beasley Coliseum and the game will air on ESPN2.