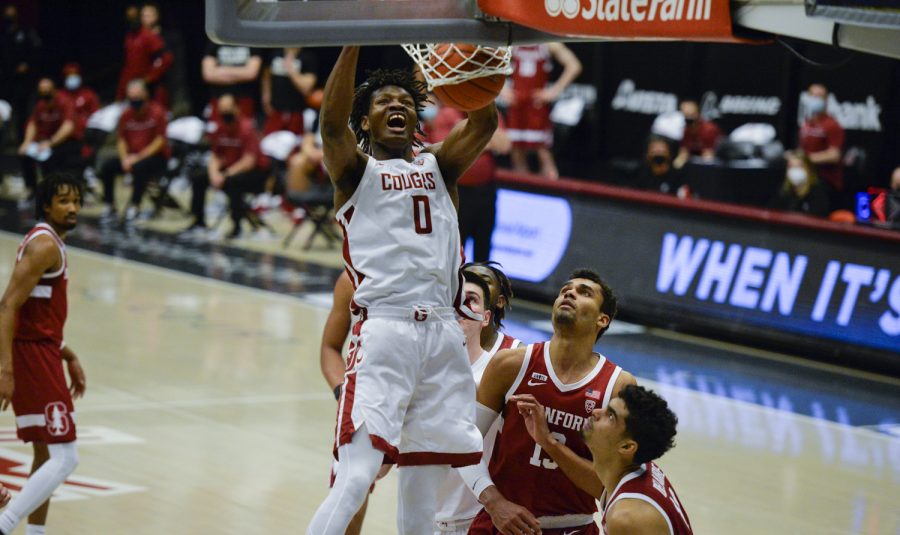 Freshman forward Efe Abogidi dunks the ball over Stanford defenders in the first overtime Saturday afternoon in Beasley Coliseum. The Cougars won in the third overtime 85-76.

WSU men’s basketball took down the Stanford Cardinal 85-76 in a gritty battle that lasted three overtimes and was led by another career performance from sophomore guard Noah Williams.

Williams previously flirted with a triple-double in WSU’s (14-10, 7-10) last win against Cal where he put up 32 points, nine rebounds, and seven assists. However, against the Cardinal (14-9, 10-7), Williams took it up another notch.

Noah Williams is the first Coug with back-to-back 30-point performances since former Cougar DaVonte Lacy did so back in 2014.

Once again, Williams tried to reach his dad’s career-high of 43 points but came up just short. Williams said he does not plan on slowing down any time soon while he is at WSU.

“That’s not the last you guys see from Noah Williams,” Williams said.

Williams hit a game-tying three-pointer with six seconds left in regulation, and this ended up sending the game into the first overtime. Williams only put together six points in all three overtime periods, but the rest of the WSU offense started rolling at that point.

Williams said he was certain when he shot the game-tying three-pointer that he knew it was going in. It was a shot he wanted to take, and he did not refer to it as a heat check considering he already made seven three-pointers before the shot.

Senior guard Isaac Bonton and sophomore guard Ryan Rapp once again did not play, as the two are still battling their respective injuries. WSU head coach Kyle Smith said he hopes to have either of them back for the final week of the regular season.

WSU’s defense held Stanford’s senior forward and potential Pac-12 Player of the Year, Oscar da Silva, to just 11 points on 28 minutes played – he would foul out of the game during the second overtime period.

“Jaz made it hard for [da Silva] to get catches,” Smith said. “Dishon [Jackson] is so big and long, he did a good job. When Efe [Abogidi] had him, and then Jaz, it takes a full team effort.”

Kunc said this win over Stanford means a lot to him as he was sick of losing to Stanford throughout his career at WSU. He gives credit to the entire team for keeping their composure during the overtime periods.

“In triple-overtime, when we were up by four or five points, you got to keep your poise,” Kunc said. “But I got to give props to the team, everyone today was focused until the last second.”

Three overtimes certainly pushed both sides to the limit, but WSU came out on top when they held Stanford scoreless in the third overtime period.

Needless to say, nearly everyone in the WSU locker room swarmed Williams following his 40-point performance and he received a Gatorade dunk from his teammates. Smith, on the other hand, received a water dunk from the team.

Smith said he has been in some thrilling and emotional games throughout his career as a coach and a player, but none that were like this.

“Needless to say, an amazing college basketball game,” Smith said. “I’ve been in a few overtime games in my day, and that’s about as good as it gets.”

WSU will hit the road once more to finish out the regular season. The first stop for the Cougs will be the Arizona Wildcats at 8 p.m. on Thursday at the McKale Center in Tucson, Arizona. The game will air on FS1.