Tennis loses both matches in Seattle

Cougars lose Apple Cup on Friday before almost upsetting No. 15 Baylor on Saturday 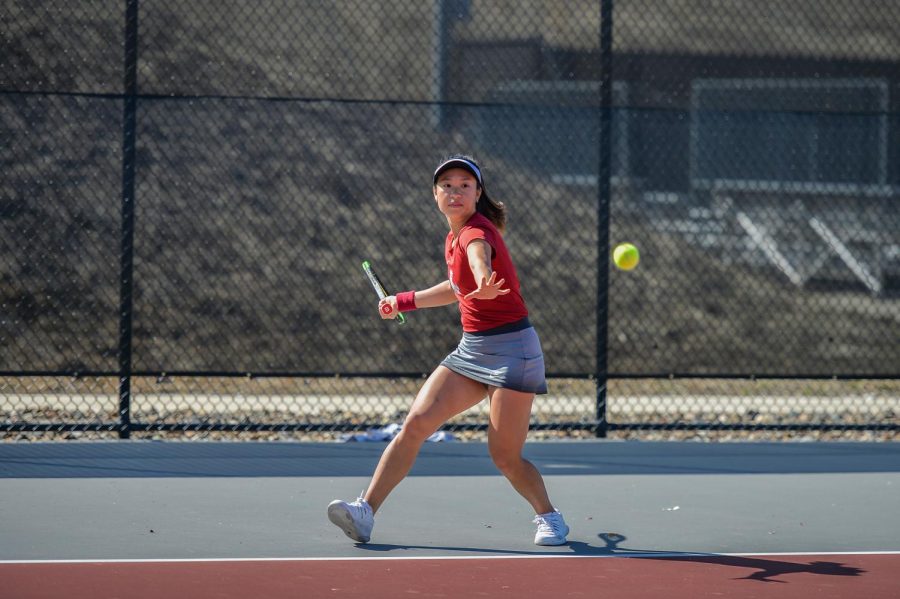 Then-freshman Savanna Ly-Nguyen hits the tennis ball back towards her opponent on Mar. 31, 2019 at the Outdoor Tennis Courts.

The WSU tennis team’s win streak came to an abrupt end this weekend, as the Cougars went 0-2 in a pair of matches at Nordstrom Tennis Center in Seattle.

The Cougars were coming off of four straight wins after back-to-back two-win weekends. This weekend, WSU headed to the Emerald City to face the Washington Huskies and the No. 15 Baylor Bears.

The first match took place on Friday and saw the Cougars and the Huskies square off in an Apple Cup match-up that Washington would win 5-2.

WSU had an early lead in each of the three doubles matches and had all broken serve in early games. The duo of sophomore Pang Jittakoat and freshman Fifa Kumhom picked up a 6-2 win over Washington’s junior Zoey Weil and freshman Tara Chilton at the No. 3 spot.

The other two doubles matches came all the way down to the wire, as the pairing of senior Michaela Bayerlova and junior Hikaru Sato were the second to finish, with their match against senior Vanessa Wong and freshman Sarah-Maude Fortin coming down to a tiebreaker that fell in favor of the Huskies to take the set 7-6.

The doubles point came down to the No. 2 spot with fifth-year senior Melisa Ates and sophomore Yang Lee also going to a tiebreaker with junior Sedona Gallagher and freshman Yolanda Lin of Washington. Just like the match in the No. 1 spot, this one came down to a tiebreaker.

The Cougars had three attempts at match point after taking a 6-3 lead in the game, but the Huskies were able to fight back with five straight points to take the game 8-6, the match 7-6 and the doubles point. It was only the second time this season that the Cougars have lost the doubles point.

Once singles play started, WSU won the first two matches with Savanna Ly-Nguyen defeating Washington’s Lin at No. 5 and Ates defeating Chilton at No. 6. Both matches were won in straight sets, with the Cougars losing just five combined games across the four sets.

That was the last victory the Cougars would pick up on Friday as 55th-ranked Bayerlova would fall at No. 1 to 74th-ranked Wong, Jittakoat lost to Weil at No. 4, Kumhom lost to Gallagher at No. 3 and Sato lost to Fortin at No. 2. All six singles matches ended in straight sets.

The following morning, the Cougars had the chance to bounce back from a loss to their rivals with a major upset but came up just a little short against No. 15 Baylor, who took the match 4-3.

Once again, the Cougars were locked in close battles in the doubles matches. Ates and Lee picked up the first win at No. 2 against sophomore Paula Baranano and senior Kristina Sorokolet of Baylor by a score of 6-3.

WSU clinched the doubles point as Bayerlova and Sato took the match at No. 1 following a 6-1 win in the tiebreaker to ultimately take the set 7-6.

At No. 3, Jittakoat and Kumhom fell 7-5 in their tiebreaker to lose their match 7-6. That would not cost the Cougars, however, as they would head into the singles matches leading 1-0.

Kumhom’s match at No. 3 was the first to finish, as junior Alicia Herrero Linana of Baylor took the match 6-0, 6-2 to tie the overall match up at one point apiece.

However, Sato would quickly give WSU the lead back with a 6-4, 6-2 win over Jessica Hinojosa at No. 2, before Baylor would even the scoreboard once again with senior Angelina Shakhraichuk defeating Melisa Ates 6-3, 7-5 at No. 6.

The Bears got their first lead of the match when junior Mel Krywoj beat Bayerlova 7-5, 6-4 at No. 1. Things got even more interesting following the next match, which saw Ly-Nguyen defeat freshman Audrey Boch-Collins 6-0, 1-6, 6-4 at No. 5.

That meant the meeting between Jittakoat and Baylor’s junior Livia Kraus at No. 4 would decide who would come out on top.

Things were looking up for the Cougars after Jittakoat took the first set 6-4, but that would not last long, as Kraus would rack up back-to-back 6-3 wins in sets two and three to take the individual and team matches.

Despite the two losses for WSU, the Cougars fought valiantly on their weekend trip to Seattle and looked impressive, even in defeat.

The team will get back into action on Friday with their first single-match weekend of the season, as they host the neighboring Idaho Vandals in Hollingbery Fieldhouse before opening up conference play by hosting UCLA the following weekend.