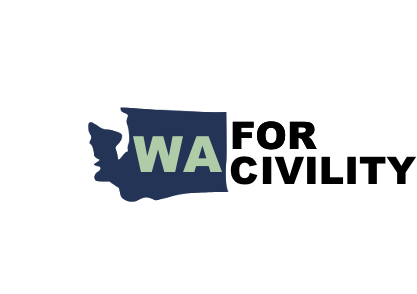 The team created four keys for fostering civility: listen, acknowledge, empathize and respect. The keys serve as resources people can remember when engaging in public discourse.

In hopes of fostering civility during public discourse among WSU students and Washington elected officials, four WSU students created and are running a public relations campaign as part of the 2021 Bateman Case Study Competition.

Public Relations Student Society of America is a professional student organization that provides opportunities for students to gain experience in public relations. This includes hosting networking events and the Bateman competition.

The Bateman competition is an annual national case study where teams of university students create and implement a public relations campaign for the same client over the course of a month. Last year, the client was the U.S. Census Bureau.

This year, the teams’ campaigns focus on increasing civility in public discourse for their client, the Public Relations Society of America, which is a national public relations professional organization and PRSSA’s parent organization.

“PRSA really wants to have a conversation with all PR representatives, trying to find a way to stop the issues that come from public discourse,” said senior public relations major Emily Harris, team leader for the Bateman competition and PRSSA member.

Francies said his team received the case brief in September. They began researching and planning for their campaign. They began by defining civility, which was difficult because it is a subjective concept, as respectful behavior. They created the four keys for fostering civility: listen, acknowledge, empathize and respect.

“These four things help you stop the conversation, puts you on the right path to have conversations about opinions with people you disagree with,” he said.

The keys were based on data gathered from four focus groups with three to four WSU students in each, Harris said. The team also conducted two surveys, one focused on students and the other on elected officials.

About 82 percent of WSU students surveyed said they faced “verbal backlash after voicing opinions on controversial topics,” Francies wrote in an email. The team received 191 responses, and the survey took place from Jan. 21 to Feb. 1.

About 74 Washington politicians responded to the second survey, Harris said.

PRSA felt the need to pursue civility, which is especially timely given the political climate, Francies said.

“I think, now, it’s like we yell our ideas and opinions and perspectives of other people and expect that to change their minds,” he said. “I think, inherently, people do want to have civil conversations, people do want to hear other ideas, and it’s just become so clouded.”

Instead, civility would encourage public discourse, allowing for people to find common ground or simply agreeing to disagree, Francies said. The four keys would serve as resources people can remember when engaging in public discourse.

Harris said she does not have the same political views as her roommate, but they are still able to sit down and have a conversation together.

“I feel like that’s how all conversations should go. But they don’t,” she said. “And I think, especially on social media, people can be mean and get aggressive really fast … Of course, everyone can state their own opinions, but there’s a nice way to state it.”

Civility, of course, does not just apply to political public discourse, Francies said. But most controversial issues in the nation are political to some degree, so it was important to the team that they also involve Washington elected officials to their target audience.

Discourse helps a democracy, he said. But the lack of civility in public discourse is polarizing and that prevents people from sharing their different opinions and perspectives.

Francies said he was born in India and spent most of his life in Kuwait, which is under Islamic rule.

“I think a lot of people take the freedom of speech for granted, for being able to express your own opinions, and being able to have conversations about it is not something that is widespread in many regions,” he said. “You have the privilege of engaging in conversations with the people you disagree with. And yet, we’re not doing that.”

The team’s campaign launched Feb. 8 and will continue until March 8.

Francies said his team had no idea what the other team’s campaign was about until it also launched on Feb. 8. About 60-70 other universities are also competing.

The winning team’s campaign will be adopted by PRSA, replicated and implemented on, potentially, a nationwide scale by the organization’s members for their own clients.

“There is a PR team in every company that gets to define what the public sees, what the public is, and as much as civility is an individual issue, it’s also an institutional issue,” Francies said.

Ernst said the Bateman competition offered her an opportunity to gain more experience with public relations. She has experience working with journalism, as she attended the Rural Reporting Plunge last year and she published some articles with news organizations outside of WSU.

“It was just like, eyes were on me, like someone was looking at what I was doing,” she said.

Each team member was interviewed by Chelsea Newman, clinical assistant professor and team advisor for the Bateman competition, last spring before being chosen, Harris said.

Harris said she did not know Ludahl or Ernst before joining the team, but she shared some classes with Francies.

“It was just crazy because at first we were all very shy, and it was hard opening up,” Harris said. “And now, we’re not only a team, but like we’re pretty much friends, like we laugh about the weirdest things all the time.”

Forming camaraderie within the team was helpful as their meetings became longer and more frequent, Harris said. At the beginning of the campaign in September, the team met two to three times a week. Those meetings became more frequent as they began conducting focus groups and surveys; they were meeting four to five times a week. Now, it is common for them to meet nearly every day.

Ernst is currently in Japan, which is 17 hours ahead of Pacific Standard Time, but her teammates have been very accommodating of the time difference.

Luckily, she said the Bateman class is her only synchronous class. This is better than it was last year when she had back-to-back synchronous classes, which meant she was up from 11 p.m. to 4 a.m.

Harris said she feels like everything has gone by so quickly, but she does not know if it is because she is attending her final semester at WSU or due to the amount of work she has put into the campaign.

Despite the team’s titles, the campaign’s work is distributed evenly for all members, she said.

All team members helped with research in the beginning of the campaign, and they all contact people involved with the campaign, as well as write blog posts for their website, Francies said.

The team hosted an event Feb. 18. About 15 people attended. They are planning to host three more events, Harris said.

The first will occur this week or next in partnership with the Foley Institute, Harris said. The second will feature the team speaking about practicing civility on social media. The third will include Washington politicians as guest speakers.

The dates for the events are not finalized yet, she said. Information about the events will be posted on social media.

Ernst said the team met with WSU President Kirk Schulz earlier this month and he endorsed their team. They are hoping to receive a confirmation letter from him or his office that they can post on their website or a mention in Schulz’s monthly newsletter to students.

As part of the campaign, students and Washington elected officials are able to make a pledge on the team’s website. Currently, nearly 50 people have made the pledge, Ernst said. This includes 25 WSU students, 17 community members and six elected officials.

People who have made the pledge are also eligible to join giveaways. Past giveaways included free pizza and coffee, she said.

Ernst created the team’s website and was in charge of creating the campaign’s logo, which was fun because she likes to use Adobe products.

“I love doing this type of stuff, anything that allows me to be creative. I’m all for it,” she said.

Ernst said she knew they wanted their logo to make it clear that the campaign was centered around Washington.

“We wanted to keep it very simplistic,” she said. “We thought, by having the state of Washington, it just really embodies our campaign … and what our campaign is and who we are.”