Pullman feels like coming back home for WSU alum, his daughter 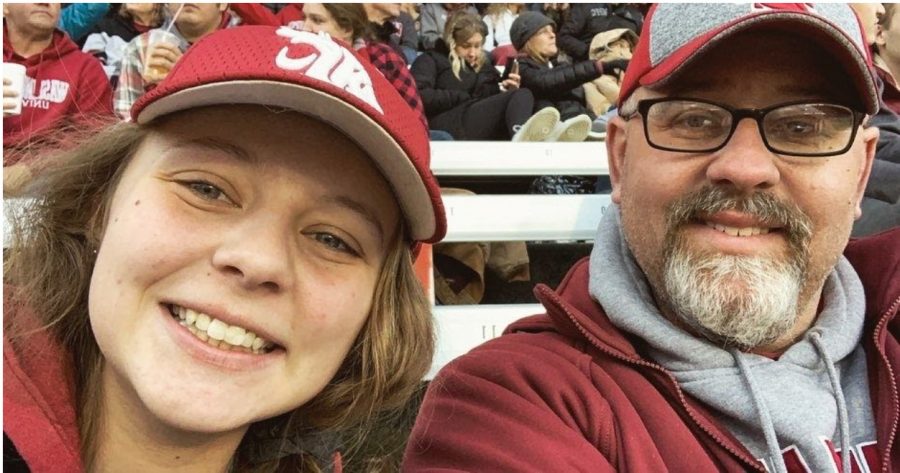 Kanoa and her dad bonded over both of them being Cougs. Dale attended his first Dad's weekend in 2019.

One WSU alum did not want his newly born daughter to see him as a pizza delivery driver.

At age 30, Dale Braunger enrolled in courses at WSU in 2003 to study history then graduated from the University of Idaho College of Law.

When Dale would study for law classes, he said his daughter Kanoa would sit by his side in the Owen Science and Engineering Library reading a book.

The two moved around eastern Washington as Kanoa grew up, including Spokane, Colfax during most of her elementary school years, and eventually, they settled in Yakima. Dale is a prosecuting attorney for the Yakima Nation Prosecuting Office.

“I had a lot more adult responsibilities going on than I think the typical 18 or 19-year-old,” he said.

Dale still clearly remembers the first Cougar football game he attended in 1981 against the University of Oregon as an eight-year-old. The scoreboard displayed the phrase “pluck the ducks.”

Kanoa Braunger, now a WSU sophomore majoring in pre-nursing, first experienced football in Martin Stadium as a five-month-old in a baby carrier, she said.

Dale said he has attended around 200 football games and has held season tickets since 1997.

“Going to games was the center of the universe,” he said.

From 1992 to 2007, Dale never missed a WSU football game. For one game, he drove from his home in California to attend, but an unruly kidney stone put a halt to the streak, he said.

Kanoa said Dale would coordinate with her mom to make sure she was with him during the Thanksgiving holiday when Apple Cup was hosted in Pullman.

Although their experiences at WSU varied drastically, Kanoa said she has bonded with her dad through both of them being Cougs.

She brought Dale to his first Dad’s Weekend in fall 2019. They watched the football game and bought tickets for the Big & Rich concert.

“My dad was so excited for it,” Kanoa said. “I didn’t realize how proud he was that I decided to go to WSU.”

Kanoa is currently a resident adviser for the Community/Duncan Dunn residence hall and was a residential technology assistant for Streit Perham last spring.

Kanoa said she looks forward to being an Alive! orientation counselor for incoming freshmen this summer.

“It made me comfortable with being in Pullman,” she said. “Coming to WSU was like coming back home.”