Local artist inspired by Palouse; worked as graphic designer to create art for companies in Olympia and surrounding areas 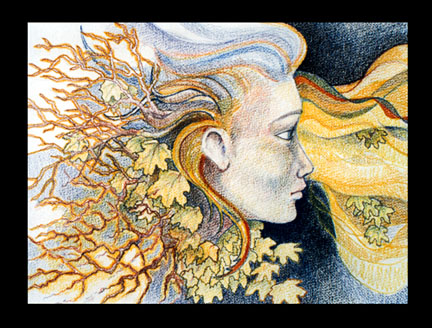 WSU alumna creates art in various mediums inspired by her time in Pullman and the greater Palouse area. Pictured above is Leaf Lady.

WSU alumna Rebecca Thorgaard paints the Palouse to express her emotions, giving more than just an image. Her painting’s such as “Thunderhead” and “Leaf Lady” express feelings and energy beyond the physical painting.

Having resided in the Palouse for a long time, Thorgaard has seen Pullman from its many angles. She was able to see the sunsets from Webster Hall’s top floor and create art both in 2-D and 3-D form as a graphic designer for the science lab.

During the 10 years she worked in the lab, she was able to watch Pullman sunsets and views of the hills from the best seat in the house. She said those images helped inspire her work, giving a golden touch to the art that represents Pullman’s glow.

A favorite painting of hers, “Leaf Lady,” is based on a photograph of maple trees and worked into the painting with sand dunes and the landscaped hills of the Palouse.

The artwork contains her friend’s face, emoting a struggle to break free. The piece of work is heavily influenced by the Palouse Hills and dark night skies that graze Pullman on occasion.

“Thunderhead” was inspired by a very dark sky in the fall. The flowing, ready to be harvested wheat is golden, intensely contrasting against the dark storm clouds, she said.

Thorgaard graduated from WSU with a fine arts degree and minor in communications. This helped her move straight into graphic design.

Having been a graphic designer for a while, while living in Olympia for a few years, Thorgaard worked for a realtor company coming up with a brochure to use for the best salesman’s prize.

They gave her free reign, and she came up with an interactive brochure that turned into a pyramid, resembling monuments of the company’s prize location for the best sales worker. Thorgaard’s idea to involve the children in her brochure won her a national title for graphic design.

“When I came on board, they said “free reign,” their point was to use imagination as much as possible,” she said. “And, so, I got the kids involved with the project.”

Relocating back near the Palouse, one of Thorgaard‘s favorite works of the area was her card series called “Barns of the Palouse.” The series consists of old barns that were rapidly disappearing in the area. Most of the barns in the series date back to the early 1900s and are no longer standing according to her website, Rose Creek Graphics.

This project first began when her mom and a former friend helped form the Washington Idaho Symphony, Thorgaard said.

As a simple way to raise money, the symphony decided to sell an academic calendar. Thorgaard‘s mom excitedly volunteered her for it. Thus was born the Barns of the Palouse card series.

“I try to stay diverse and like to dabble in other art forms, like calligraphy, many of which, but not all, can be viewed on my website,” Thorgaard said.

Thorgaard said she likes to step out of the box when it comes to art styles. She tries to combine tools that are not generally meant to work together.

“For ‘Leaflady,’ I used a combination of colored pencils on watercolor paper to create a unique texture,” Thorgaard said.

After taking a break from art for a while, Thorgaard‘s regrouping. She said she decided that it is time to get back into art and into the thing that she loves.