OPINION: Satire: How to lose a guy in two hours

Always have a back-up plan for when a date starts to go downhill, but have fun with it 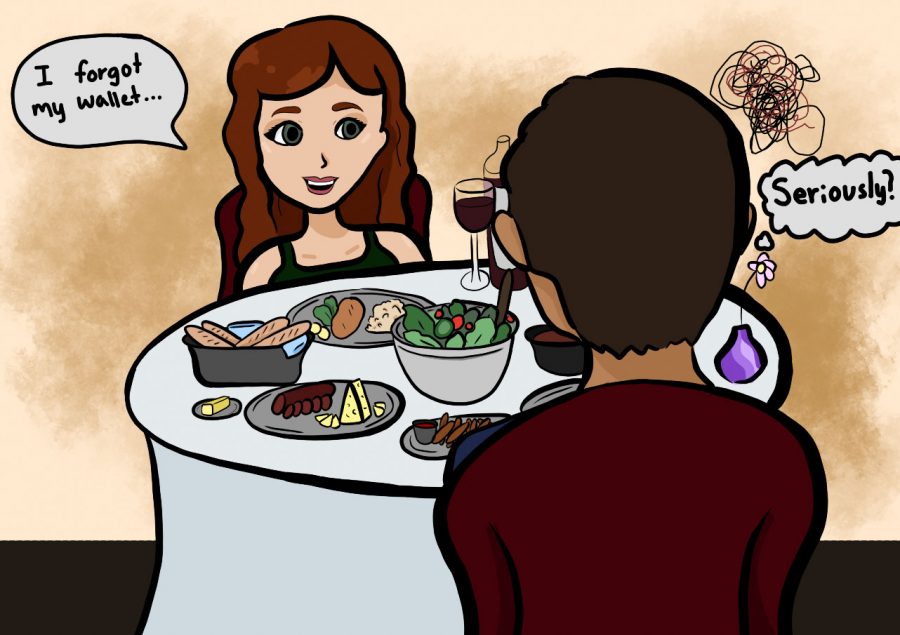 Dating is a formal and fun way of finding a partner, in all seriousness. But you might find yourself in a situation where a date turned awkward, uncomfortable, or just outright terrible. No matter what the reason is, you might need an escape route or a reason for the person to never ask you out again. Like ever.

Here’s a setting: Sidney, your best friend has been in a relationship for a year, while you’ve stayed single,  encourages you to get in a relationship. She sets you up with her boyfriend’s buddy, Angus.

Yes, he is named after beef cattle. But he was the quarterback in high school, and he just got promoted to manager at his dad’s business. So naturally, you agree to give him a chance.

You start to get ready four hours before the date because you haven’t shaved your legs since quarantine. You choose that cute black dress you bought online six months ago that you saw on TikTok.

Once you’re ready, Angus texts you that he’s outside. Okay, maybe he couldn’t find parking so he couldn’t come to the door. You walk up to his 1994 Mustang GT waiting for him to pop out of the car to open the door for you, but instead, he rolls down the window and tells you to get in.

No excuses there, so you go ahead and get in his car. On the way to the restaurant, he talks about how close he got his high school football team to state nine years ago the entire 30-minute drive across town. You try to invest in the conversation, but he hasn’t asked you a single question about yourself. Maybe he’s nervous, so you give him another chance.

You pull up to that nice restaurant Sidney always goes to with her boyfriend for date nights. He hands the keys to the valet and keeps walking. Angus doesn’t wait up, so you let yourself out to try and catch up to him.

“Hey beautiful, table for Angus,” he says to the young hostess.

The two of you are seated, so now you’re left to continue the conversation. Before you can say one word, our dear Angus asks you a super important question that couldn’t wait until the end of the date: “Do you wanna head over to my place after this thing?”

That, my friends, is the straw that broke the camel’s back. So, what do you do now? There is no way you’re going home with Angus.

Professional dating prophet, Mackayla-Leigh McMatcher says her number one tip is to talk about your ex. Even if you don’t have a large selection to talk about, make one up.

“You don’t have to be harsh, but once you start comparing your date to an ex, no matter how good or bad that relationship was, you will probably never hear from your date again,” McMatcher said.

If bringing up an ex is too painful, try acting bored by the conversation. Yawn frequently, or just look around the room rather than giving them your full attention. If they’ve had their three strikes, it’s a little hard to feel bad for them.

“When you’re going for vengeance, you could order a bunch of food and then act like you forgot your wallet when the waiter brings the check,” McMatcher said.

Instead of ordering a garden salad with water to drink, go for the appetizer, a steak dinner and a nice bottle of wine. And most importantly, don’t forget the dessert. If they hurt your feelings, you could return the favor by hurting their pockets.

Professional player Chad McRad said the best way his past dates escaped his wrath is by talking about their future together. Apparently, this is a good way to have him running out the door.

Talk about what your future children would look like, what kind of house your family would live in, locations for a wedding, or even about meeting their parents soon. You might as well start naming your children, and how their last name sounds with your first. But be flirt-tastic about it, make it believable.

McRad also told us to say he winked charmingly and requested we give out his phone number to some of our cute readers. We chose to deny that request to spare our readers the heartbreak. You guys deserve better.

Another thing his past dates did to have him running like a track-star was bringing up details about McRad during the dates. So that means cyber-stalk the heck out of your date while you’re in the bathroom or before the date, in case the date takes a sharp turn to no-man’s land.

“One time, this girl asked me about my childhood dog, Captain, who passed away when I was 16,” McRad said. “She must’ve had to dig pretty far down my mom’s Facebook page. That was thirteen years ago, so kudos to her because my mom posts on Facebook every day.”

To sum up what we’ve learned, let’s apply it to our knight in shining armor, Angus. What do you say to answer his desperate question?

“Only if I can bring my CPAP machine to the sleepover, you’re gonna have to get used to that for the next 50 years, handsome.”

If that wasn’t enough to bring his engine to a halt, you bring on the big guns. You start crying once the waiter brings you your steak dinner because your ex-boyfriend, Hunter, used to order the same thing.

Now talk about all the times Hunter made you sad because he would talk to girls on Tinder — for the rest of the date. Once Angus has enough, he probably would’ve asked for the split check, but before the waiter can start walking away, you rummage through your bag to find your wallet “isn’t there.”

The waiter has to bring Angus a $150 check, plus tip. Angus isn’t happy about it, but he pays for dinner and you head to the car in silence. He drops you off, and you let yourself out of his car. You can celebrate by making banana bread and making fun of Angus on Facetime with Sidney.