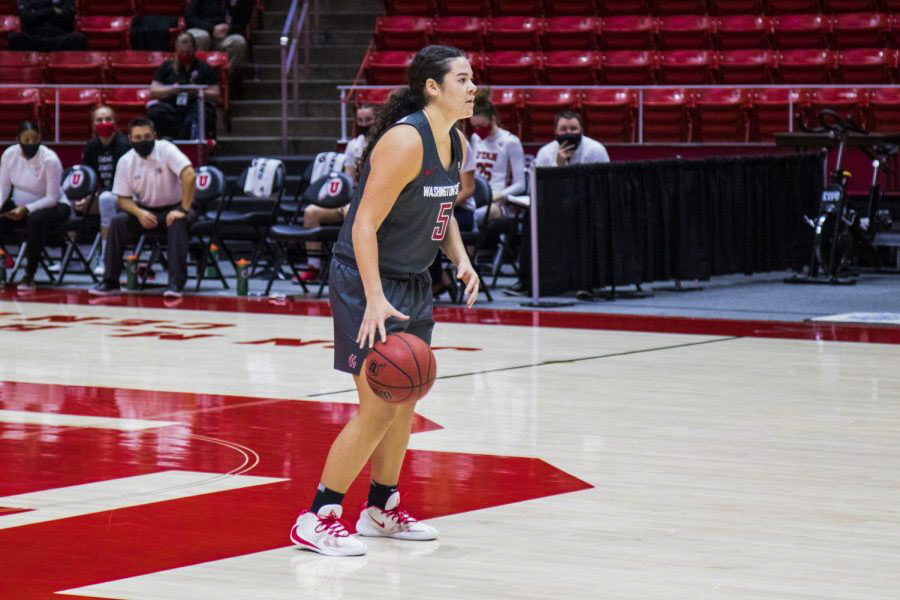 The men’s and women’s basketball teams at WSU have had a tough few years. This season has left a little to be desired, as well, but that doesn’t mean there is not a ton of good things to take away from 2021. Specifically, the Cougars have a golden generation of talent currently in Pullman and ready to take the reins.

On the women’s side of things, it is clear as day. Charlisse Leger-Walker is in a world of her own. The freshman has more Freshman of the Week awards than anyone in the history of the conference.

Heading into the final game of the regular season, Charlisse leads the team in points, steals, minutes played, three-point and free-throw percentages of players with more than 15 shots. On top of that, she is second in assists, third in rebounds and second in blocks.

When casting the wider net of the whole conference, Charlisse Leger-Walker leads it in points and steals, which is something a freshman has never done. Charlisse Leger-Walker’s scoring average is good enough for the fifth-best season in program history. Not to mention, it shatters the WSU freshman record by more than three points per game.

Even in a shortened season, she has broken the freshman record at WSU for 20-point games with twelve so far. If she can maintain her current pace, Leger-Walker would be the quickest in program history to reach 1,000 points by a full six games.

Obviously, Charlisse Leger-Walker is a star with massive potential in Pullman, but she is not even the only one on the women’s team in this golden generation.

Center Bella Murekatete is a sophomore, but that means she has three full seasons left after this year due to COVID-19 giving every player an extra year of eligibility. Murekatete currently has the second most rebounds on the team and the seventh most in the conference. She is also the fourth-highest scorer on the Cougars.

Add to that the likes of sophomores Johanna Teder, who is averaging six points per game and sits fourth on the team in assists, Grace Sarver and Michaela Jones and this is an incredible group of underclassmen on the women’s team. All five show the potential to be game-changers in the Pac-12 down the line.

Over on the men’s side, things are not much different in terms of young talent. Freshmen Efe Abogidi is a force for the Cougars down low. Despite this season being abbreviated, Abogidi is fourth all-time for freshmen at WSU in rebounds and third on the WSU freshman list for blocks, sitting just five back of the lead with at least four games left to play.

Abogidi currently leads the team in rebounds and blocks, while sitting third in points. He also sits third in both rebounds and blocks in the entirety of the Pac-12. The big man shows a lot of promise and has the potential to be a superstar on the Palouse.

Second in rebounds on the team is another freshman, Andrej Jakimovski. Jakimovski is just two inches shorter than Abogidi but does not lose out on much in terms of a post presence. In addition to that, Jakimovski shoots three-pointers at a higher percentage than Abogidi does. The North Macedonian did miss a few games, but with the extra year of eligibility will likely flourish into an incredible player for the Cougars.

Rounding out the literal “big three” of freshman is center Dishon Jackson. Jackson sits fourth on the team in rebounds this season and has picked up the fifth-most minutes for WSU this year. Jackson also comes in at fourth in points and second in blocks on the team. The future is very bright for WSU in the paint. Those are not the only freshmen either, as guard TJ Bamba has played a significant role off the bench this season.

Once you move up one class, there is another group of potential stars. Led by guard Noah Williams, the group includes Ryan Rapp, Volodymyr Markovetskyy and DJ Rodman. Williams had a monster past weekend with 72 combined points against Cal and Stanford while sitting second in points on the team for the season. Williams also sits second on the team in assists and third in rebounds. He also has the best three-point percentage of anyone on the team with at least 20 attempts, the biggest of which sent the game against Stanford to overtime.

The other three members of that sophomore squad do not have the same high-level stats as Williams, but they all also missed significant time due to COVID-19 protocol and injuries. This certainly put a damper on their overall season stats, but, again, with the extra year of eligibility, this can essentially be a wash and allow them to redo their sophomore season next year with even more experience under their belt.

While not included in this particular group due to being a senior, Isaac Bonton, the leading scorer for the men’s team, was also a part of this talent pool when he transferred to WSU before last season.

The combination of massive men’s and women’s basketball talent that has arrived on the Palouse in the last couple of years is incredible and no doubt a testament to the work that head coaches Kyle Smith and Kamie Ethridge are putting in. The coaching staffs for both teams have done an incredible job identifying and bringing talent to Beasley Coliseum.

With this talent, the years to come could prove to be some of the most exciting and successful in Cougar basketball history.