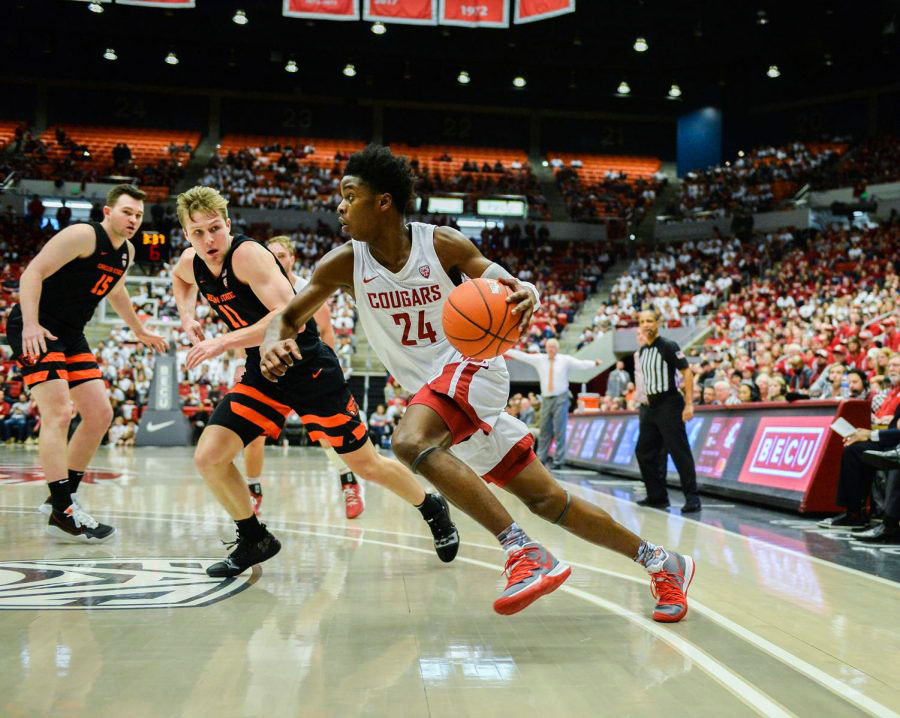 After a historic week at home for WSU men’s basketball, the Cougars (14-10, 7-10) will go on the road to face the Arizona Wildcats at 6 p.m. Thursday at the McKale Center in Tucson, Arizona.

WSU head coach Kyle Smith said he’s happy to see Williams receive all the recognition from last week and it shows how great of a player he is.

“He’s got such a great will to succeed and compete,” Smith said. “And he’s got one of the best traits, he’s not afraid to fail. He’ll take some chances.”

With the recent win over Stanford, WSU will now at the very least finish the season at .500 for the second straight season.

The last time WSU faced Arizona (15-8, 9-8), the two schools battled it out for two overtimes with the Wildcats coming on top in the end 86-82. The Cougars’ leading scorer that game was senior guard Isaac Bonton who finished the game with 25 points.

Bonton and sophomore guard Ryan Rapp are day-to-day with their injuries heading into this weekend. Smith said Rapp is a little ahead of Bonton, but he hopes they can both return for Thursday’s game.

Williams said the Cougars will be a tough team to beat once Rapp and Bonton make their return from injury.

“We’ve been moving the ball a lot better, [we’re] playing throughout the team,” Williams said. “And we’ve been getting easy buckets.”

Williams also credited freshman forward Andrej Jakimovski’s efforts as of late with his passing. Jakimovski tallied 18 assists across two games last week, his first performance coming close to a triple-double of his own.

“18 assists in the last two games is beyond what we expected; that’s awesome,” Smith said. “Hopefully, we’re tapping into something there.”

Arizona went through a tough stretch of games before taking down the No. 17 USC Trojans last Saturday. Before that victory, the Wildcats were 2-5 with their two wins coming against Cal and Oregon State.

Smith said the Wildcats’ age and transition offense is something he didn’t quite acknowledge in the first matchup this season.

Arizona’s leading scorer junior guard James Akinjo put up 20 points and seven assists in their win over USC last week. He remains one of the conference’s top three-point shooting guards as he averages nearly 39 percent from the three-point line.

Williams, however, averages almost 42 percent from the three-point line, with the bulk of that stat coming last week against Stanford where he made a career high eight three-pointers. Expect a good matchup between Akinjo and Williams on Thursday.

Smith said it’s been hard with such a beat-up backcourt and having to switch around forwards to play guard has been a challenge. The Cougars have established the other two “pillars” of Smith’s philosophy, but ball handling is the one part of the game that the Cougars need to figure out before the tournament, Smith added.

“I think if we take care of the ball, we’re capable of beating anybody,” Smith said.