New fee could increase the capacity of WSU food bank, waits approval from Board of Regents 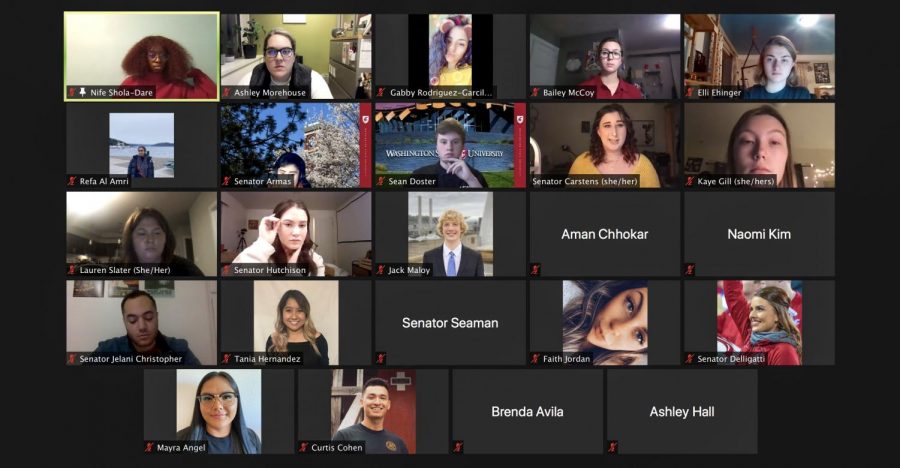 ASWSU Senator Tania Hernandez said she supported the $5 student fee referendum but was concerned about increasing student fees during a pandemic.

ASWSU unanimously approved to place a $5 student fee initiative on the ASWSU ballot, which would support the WSU food bank in creating a sustainable solution for student food insecurity, during a meeting Wednesday.

“We should all be surprised, and also disappointed, that there is nowhere in WSU’s budget that is allocated for the food pantry on campus,” Shola-Dare said.

The idea for the referendum came from Shola-Dare’s time spent on the Basic Needs Assessment Task Force. The goal of the task force is to identify various challenges students face, like homelessness, access to health care and food insecurity, she said.

During her time on the task force, Shola-Dare discovered there is no designated person organizing efforts to address food insecurity, she said.

If the referendum is approved by students and the WSU Board of Regents, the WSU Office for Access and Opportunity will hire a student part-time to lead the food bank, Shola-Dare said.

The job description includes making sure the food pantry is fully stocked and developing other programs to combat food insecurity. Shola-Dare said the ultimate goal is to hire someone full-time, which would not increase the $5 fee.

Students can opt out only if they qualify for a fee waiver. The fee would be automatically applied to student accounts each semester, Shola-Dare said.

“No student should have to worry about where their next meal is going to come from,” ASWSU Senator Jelani Christopher said. “Having everyone pay $5 is a small gesture that can help solve the long-term issue of food insecurity.”

Shola-Dare did not reach out to Services and Activities Fees for potential financial assistance to stock the food pantry. She said the goal for the referendum is to make sure there is constant funding for the food pantry, and S&A is not a sustainable answer to the problem.

Christopher said he is not sure S&A could regularly contribute to a food pantry fund considering recent budget cuts.

The food bank cannot rely on donations from WSU departments either, since contributions cannot be expected every semester, Shola-Dare said.

If students approve the referendum on the ASWSU ballot, the WSU Board of Regents will implement the fee. The fee would be implemented the next academic school year, she said.

ASWSU Senator Tania Hernandez said she supported the referendum but was concerned about increasing student fees during a pandemic.

Lauren Slater, ASWSU Senator and referendum sponsor, said she was also hesitant about adding another student fee at first.

Slater said her mind changed after reading through the referendum, which reminded her of the phrase “Cougs help Cougs.”

Even though the fee might have to come out of a loan, Slater said she felt the expense was worth the cost, if it meant helping out a fellow student.

“I feel like that’s what this resolution encompasses — the fact that we are all here to help each other, and that is what makes our school so special,” she said.

Editor’s Note: This article has been edited to reflect that ASWSU unanimously approved to place a $5 student fee initiative on the ASWSU ballot and that students can opt out only if they qualify for a fee waiver. The story was also corrected to mention that the WSU Board of Regents will implement the fee if students approve the referendum on the ASWSU ballot.