President Joe Biden issued the proclamation on Feb. 22; More than 500,000 Americans have died 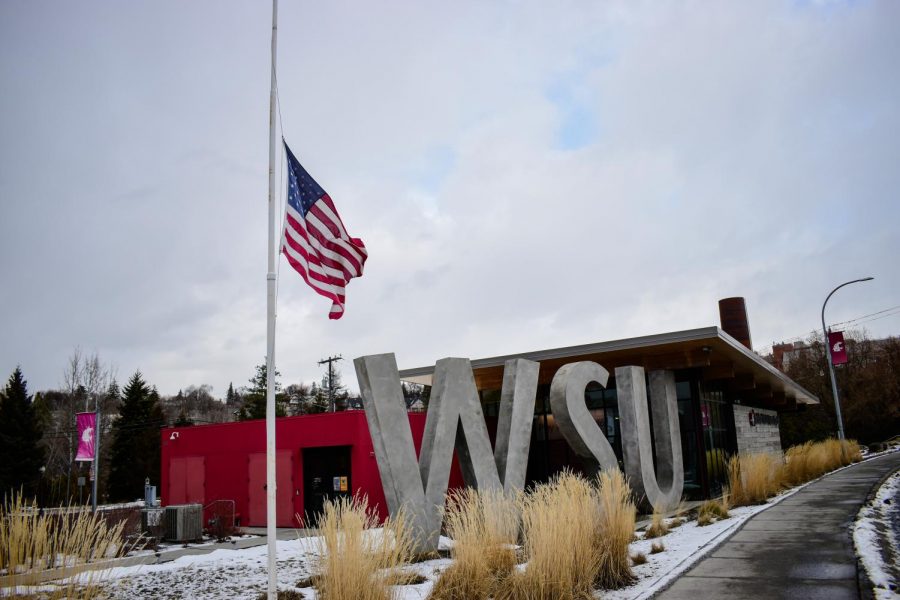 Raising and lowering the flag down to half-staff is something Air Force ROTC takes seriously.

American flags in Whitman County and around the nation are currently being flown at half-staff to remember those who have lost their lives to COVID-19.

President Joe Biden issued the proclamation on Feb. 22 and led the country in a moment of silence to honor more than 500,000 Americans who have died. Flags will be at half-staff until sunset each day through Feb. 26, according to a press release from the White House.

More Americans have died during the pandemic than in World War I, World War II and the Vietnam War combined, according to the press release.

Flying the flag at half-staff in remembrance of those who died from COVID-19 is the right thing to do, said Brian Balazs, Air Force ROTC detachment commander at WSU. Raising and lowering the flag down to half-staff is something AFROTC takes seriously.

“It’s a sign to honor somebody that has passed,” he said. “In this case, half a million people have passed … that is a symbol that when people see, I hope they pay attention to and then can help observe and pay respects.”

Cadets from the Air Force and Army ROTC raise and lower the flag in the middle of the WSU campus. AFROTC completes the task during the spring semester and Army cadets in the fall, he said.

Balazs said cadets march in a detail of three to four every morning and evening to raise and lower the flag. The flag does not stay up all night, just during the normal business day.

AFROTC uses information from Half Staff American Flag Notifications, a website that relays all presidential and state orders, to decide when they need to lower the flag to half-staff, Balazs said.

Pullman Fire Chief Mike Heston said the fire department has received questions from community members about why flags are currently at half-staff. To inform the public, the department tries to post information on their social media pages.

“I think it’s good to honor the folks who have passed away with COVID,” Heston said.

The state government gives the fire department information about when to fly the flag at half-staff. Before lowering the flag, Heston said he contacts the city mayor to make sure they know why the flag is being lowered and whether they agree with the action.