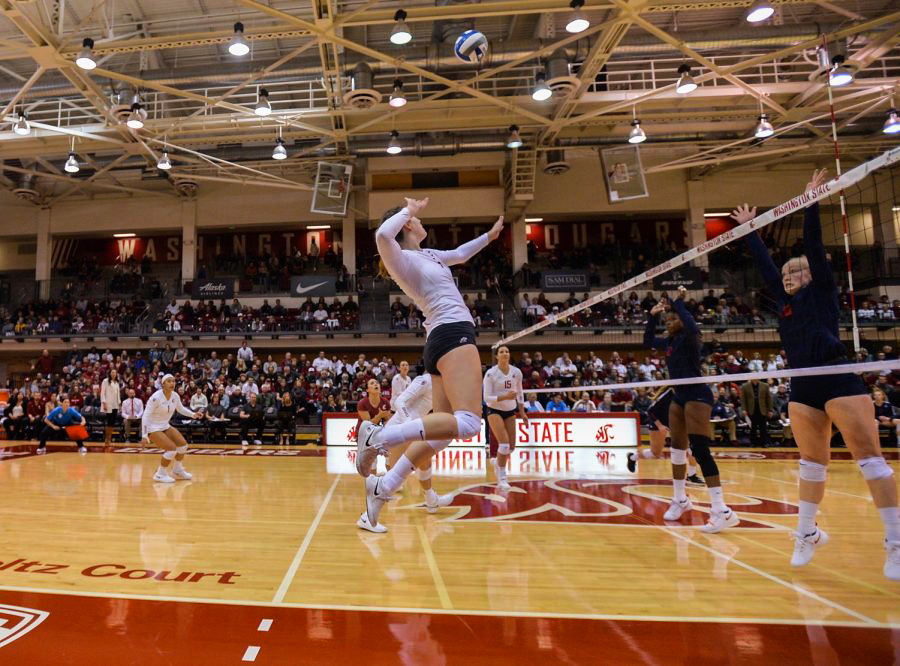 Sophomore outside hitter Pia Timmer leads the team with 104 kills.

The WSU volleyball team is back in Bohler Gym this weekend to take on the California Golden Bears on Friday and Sunday.

The Cougars’ doubleheader against Stanford last week was canceled due to COVID-19 protocol. The Cougars have not played since Feb. 13 against Colorado.

“They are a very young team, and they keep getting better and better every single week,” head coach Jen Greeny said.

One of the most notable stories is that WSU will now allow fans to attend the games at Bohler Gym. Greeny said that the team is excited to have fans back in attendance.

“I think it’s great, it was fun to have cutouts, and it was fun for our foreign players to have cutouts of their families … It will be great to just have some live humans,” Greeny said. “I think anyone in there can really make a difference.”

So far this season, the Cougars have a hitting average of .750 where Cal has an average of .100. So far, WSU has multiple players that have had several double-doubles in previous matches.

Pia Timmer, WSU sophomore outside hitter, has had more than 10 kills in each match since the Arizona State win on Jan. 30. Timmer leads the team in kills with 104, which is almost a quarter of the team total at 428.

Redshirt sophomore setter Hannah Pukis has dominated offensively this season, as she has had 40 assists in two matches this season. Pukis’ total of 303 assists leads the team along with her 109 digs.

In WSU’s previous matchup when they swept Colorado, the Cougars had a big offensive game and came away with over 90 kills, nine aces, and over 70 assists. WSU has won their last three matches to improve to 6-2 overall in the season.

Cal has not been able to turn it on this season, as their only win was against then-No. 15 Stanford. Any win against the Cardinal is impressive, as the school has won nine NCAA national championships, including the last two straight.

WSU has not fared well against Cal in the past, as they are 7-30 all time and have a home record of 3-13. The Cougars hope to flip the script this time around and continue to rise in the national polls.

Catch the Cougars at 6:00 p.m. Friday and 11 a.m. Sunday in Bohler Gym. The game can be live-streamed through the Pac-12 website and the live statistics can be followed through WSU’s StatBroadcast page.