Use this guide to find out when, where current, former Cougars play this week 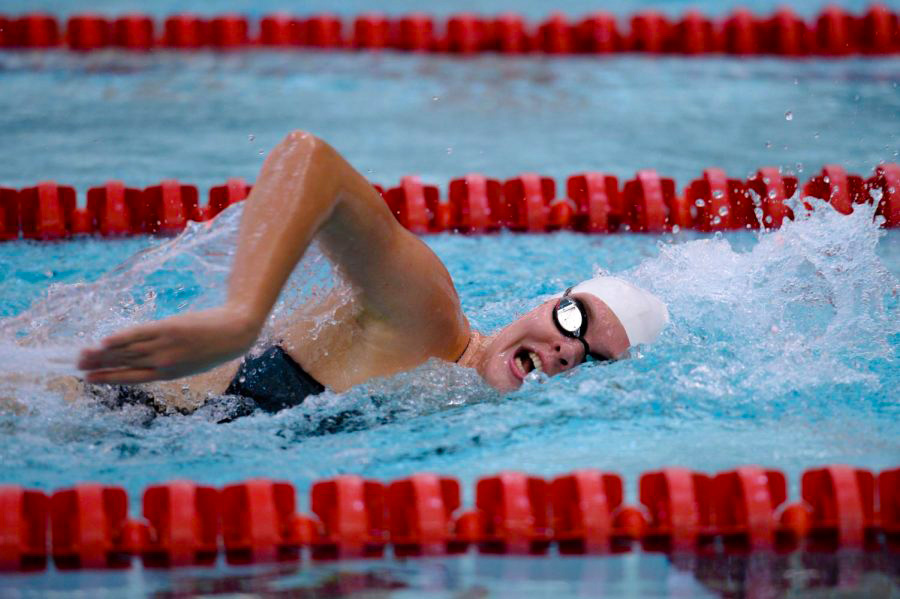 Another week of Cougar sports means another weekly viewing guide. Just like last week, this week contains Pac-12 Championships and an Apple Cup, meaning there is all the more reason to tune in.

10 a.m. — Get the morning started with the Husky Classic at Dempsey Indoor in Seattle. The Cougars come into the competition following some fantastic individual performances in the Matador Qualifier in Lubbock, Texas. The full event will be streamed on RunnerSpace.

2 p.m. — Tennis gets their sole match of the weekend on Friday as they host our neighbors, the Idaho Vandals. The Cougars are coming off a tough weekend in Seattle in which they lost to both Washington and No. 15 Baylor. Despite the losses, the Cougars looked impressive and will be looking to bounce back in a big way. The match will be live-streamed by WSU.

2:05 p.m. — The Cougars get game two of their second series of the season, as they face the Dixie State Trailblazers in St. George, Utah. WSU’s bats were hot last weekend in California when the Cougars took three of four games. They look to keep the momentum going against the first-year Division I program. The game will be live on the WAC Digital Network.

4:30 p.m. — The WSU swim team gets back in the pool in Houston for day three of the Pac-12 Championships. The Cougars have already set WSU records during the first two days and will look to keep the momentum going on their hunt for some championships. The event will be live on the Pac-12 Networks.

Also at 4:30, Coug alum Aron Baynes will lead his Toronto Raptors in a home meeting against the struggling Houston Rockets. The Rockets also have a Pac-12 representative, as Kevin Porter Jr. is a USC product. The game can be found on NBA League Pass.

Additionally, former Coug Malachi Flynn and Raptors 905 will face the Greensboro Swarm, an affiliate of the Charlotte Hornets, in the G-League bubble. Greensboro also features Arizona alum Kobi Simmons. The game will be live on ESPN+.

6 p.m. — After losing out on their weekend series last weekend, WSU volleyball gets back on the court. This time will be in Bohler Gym against Cal. The Golden Bears come into the meeting dead last in the Pac-12 with a record of 1-9, while WSU sits tied for third with a record of 6-2. The match will be live-streamed by WSU.

7 p.m. — The Cougars soccer team heads back inside the bubble with their first Pac-12 meeting of the season. The Utah Utes come to town to kick-off the conference schedule. Last season, WSU won the meeting between the two teams 4-1. Unfortunately, at this time, it seems WSU has chosen to not stream this meeting, but live stats can be followed on StatBroadcast.

Also at 7, the Portland Trail Blazers head to LA to face the Lakers. Coug alum CJ Elleby will look to make an impact against LeBron James. The Lakers will also have a former Pac-12 player in their ranks with Utah alum Kyle Kuzma. The game will be televised nationally on ESPN.

10 a.m. — The track and field team gets ready for day two of the Husky Classic in Seattle. The Cougs will want to keep up any momentum they can put together on day one. Once again, the event will be live on RunnerSpace.

Noon – Former Coug Malachi Flynn and Raptors 905 face the Westchester Knicks, an affiliate of the New York Knicks, in the G-League bubble. Louis King of Oregon is the only Pac-12 representative on the Knicks. The game will be live on NBA TV and the league’s Twitch channel.

1:05 p.m. — Game three between WSU baseball and Dixie State gets set from St. George, Utah. The Cougs will be the favorites throughout the series and will look to use that to their advantage. The game will be live on the WAC Digital Network.

4:30 p.m. — The WSU swim team gets ready for the final day of competition in the Pac-12 Championships in Houston, Texas. WSU will look to capitalize on their final chance to earn Pac-12 honors in the 2020-21 season. The event will be live on the Pac-12 Networks.

6 p.m. — Game two of the Arizona road trip gets underway for the Cougars men’s basketball team. WSU will face Arizona State twice over the course of three days in Tempe, Arizona. Last season the teams split their two matchups with the home team winning each time. The game will be live on the Pac-12 Network.

11 a.m. — The day gets going with match two of the volleyball series between Cal and WSU. The Cougars will look to close out the series and gain momentum heading into the next weekend. The match will be live-streamed by WSU.

11:05 a.m. — WSU baseball will attempt to close out the series with Dixie State with some momentum. Following the series, the Cougars will head to Seattle next weekend to face the Redhawks, so they will want to have momentum on their side heading into those matchups. The game will be live on the WAC Digital Network.

Noon — The Cougar soccer team will face Utah for the second time in the same weekend, but this time, it will not count towards the Pac-12 standings. Once again, it appears WSU will not stream the match, but stats will be live on StatBroadcast.

1 p.m. — Another week, another Apple Cup. This time it is the second leg of the women’s basketball series. The last time the two sides met was the season opener in Seattle, which WSU won 60-52. This game will bookend the season as WSU closes out their 2020-21 regular season campaign with the matchup. The game will be live on the Pac-12 Network.

4 p.m. — Aron Baynes and the Raptors have another home matchup as they welcome the Chicago Bulls to their temporary home in Tampa, Florida. The Bulls have a couple of young Pac-12 alum with Arizona’s Lauri Markkanen and UCLA’s Zach LaVine. The game can be found on the NBA League Pass.

All-day — WSU women’s golf gets things going once again as they take to the course in Oxnard, California for the Bruin-Wave Invitational. While there will not be a way to watch it live, stats can be followed on GolfStat.

Noon — The Cougars men’s basketball team will close out their 2020-21 regular season with a second-straight meeting against the Arizona State Sun Devils in Tempe, Arizona. The game will be live on the Pac-12 Network.

Also at noon, Malachi Flynn and Raptors 905 face the Canton Charge, an affiliate of the Cleveland Cavaliers in the G-League bubble. The game will be live on ESPN+.

7:30 p.m. — CJ Elleby and the Blazers head back to Portland as they host the Charlotte Hornets. The closest connection the Hornets have to the Pac-12 is LaMelo Ball, who was committed to UCLA before heading overseas. The game will be live on NBC Sports Northwest and NBA League Pass.

All-day — Day two of the Bruin-Wave Invitational gets underway for the women’s golf team. While there will not be a way to watch it live, but stats can be followed on GolfStat.

4:30 p.m. — The Raptors and big man Aron Baynes get on the court again as they welcome the Detroit Pistons to Tampa. The Pistons have two Pac-12 representatives with Utah’s Delon Wright and Isaiah Stewart, a rookie out of Washington. The game will be live on the NBA League Pass.

All-day — The third and final day of the Bruin-Wave Invitation gets going, as WSU women’s golf looks to finish the tournament strong. While there will not be a way to watch it live, stats can be followed onGolfStat.

TBD — Women’s basketball will play on Wednesday, it is just not clear when and whom they will play. Going into the weekend, WSU sits at the eight seed, which would have them playing at 2 p.m. against the nine seed, which is currently Arizona State. With a win this weekend, the Cougars could potentially move up to seven, which would get them a 5 p.m. meeting with the ten seed, who is currently Utah. No matter who and when they play, the game will be live on the Pac-12 Network.

4:30 p.m. — Malachi Flynn and Raptors 905 face the Oklahoma City Blue, an affiliate of the Oklahoma City Thunder, in the G-League bubble. The Blue have two Pac-12 representatives in Rob Edwards of Arizona State and Moses Brown of UCLA. Additionally, Ryan Woolridge from the Gonzaga Bulldogs is a part of the team. The game will be live on ESPN+.

7 p.m. — The Trail Blazers and CJ Elleby look to continue to defend their home floor as they welcome the Golden State Warriors to Portland. The Warriors have one Pac-12 player on their active roster: Kevon Looney of UCLA. The game will be televised nationally on ESPN.

TBD — If the Cougs women’s basketball team wins on Wednesday, they will play in the quarterfinals on Thursday. If they win the eight seed vs nine seed game, then they will face top-seeded Stanford at 2 p.m, while a win in the seven seed vs ten seed game would earn them a 5 p.m. meeting with the second-seeded Arizona Wildcats. The game would be on the Pac-12 Network.

12:30 p.m. — Raptors 905 face the Iowa Wolves, an affiliate of the Minnesota Timberwolves, in the G-League bubble. The Wolves have four former Pac-12 players on the squad: Zylan Cheatham of Arizona State, Jordan McLaughlin of USC, Allonzo Trier of Arizona and Dakarai Tucker of Utah. The game will be live on ESPN+.

4 p.m. — Aron Baynes and the Raptors take the floor one last time this week as they go on the road to face the Boston Celtics. The Celtics have two Pac-12 players on their squad: Cal’s Jaylen Brown and Oregon’s Payton Pritchard. The game will be live on NBA League Pass.

7 p.m. — CJ Elleby gets his final game of the week as the Trail Blazers host the Sacramento Kings. The Kings currently have no Pac-12 players on their active roster. The game will be live on NBC Sports Northwest and NBA League Pass.