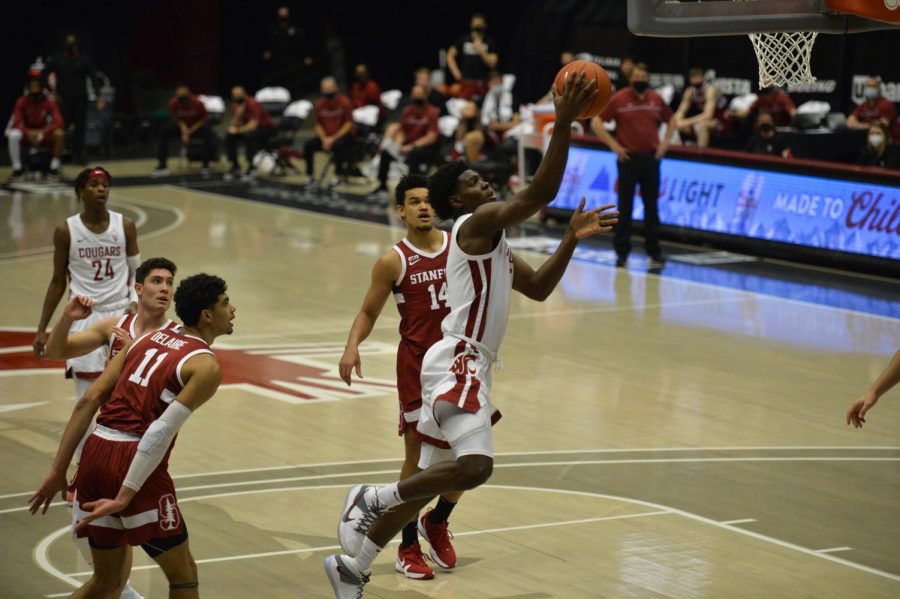 Driving to the hoop around Stanford’s defense, freshman guard TJ Bamba makes a layup during the game Saturday afternoon in Beasley Coliseum.

Senior guard Isaac Bonton and sophomore guard Ryan Rapp both made their returns to the Cougars’ rotation against the Wildcats. Both players came off the bench with only Bonton making an impact on the scoreboard with just one three-pointer.

Bonton finished the game with 19 minutes played, as WSU head coach Kyle Smith said dismal performances like this one happen when you’re coming off a multi-game injury.

“I don’t know if [this game] will be hurting him or hopefully keep feeling better,” Smith said. “We’ll see where it goes.”

Rapp played just one minute in the game and Smith acknowledged that Rapp’s status isn’t quite on the same level as Bonton’s.

After a momentous back-to-back showing last week, sophomore guard Noah Williams put up just eight points on 2-15 shooting from the field against the Wildcats (16-8, 10-8). Smith said Williams made a couple of key plays down the stretch, but Arizona’s defense at the guard position is what kept him out of his rhythm offensively.

The leading scorer for the Cougars was freshman guard TJ Bamba who in his third career start had 12 points on 3-5 shooting. Freshman center Dishon Jackson followed up the leaderboard with 10 points of his own, eight of which came in the first half.

The first half was mostly back and forth as both sides showed tenacity on defense to start out the game. Whenever either the Cougars or the Wildcats had the lead, it never exceeded four points in the first half.

After a scrappy first half, Arizona led WSU 28-24 and both sides had at least 20 rebounds and exactly six turnovers. WSU’s leading scorer at the half was Jackson, and other than a last-second three-point attempt, Bonton was 0-1 from the field at halftime.

Also at the half, WSU had yet to shoot a free throw while Arizona shot just two free throws, missing both. This is the first game of the season that WSU didn’t have a single free throw attempt at halftime.

The second half started and it seemed like much of the same theme in the opening minutes. The Cougars cut the lead down to one with just under 17 minutes left in the game off a second-chance layup from Jackson, however, this was the closest WSU came to overtaking the Arizona lead.

Bamba was certainly the MVP of the second half, getting a team-high nine points in the half, while the rest of the team struggled offensively. After no trips to the free-throw line in the first half, WSU went 6-11 to finish out the game.

WSU pulled down 16 offensive rebounds in the loss but only put up 12 second-chance points as a result. Smith said the second chance scoring and the poor play-making statistics for the team were some of the main contributors to the loss.

“I think they really had us on our heels offensively,” Smith said. “We’ll regroup.”

With this loss to the Wildcats, Smith remains winless against both Arizona schools in the conference.

WSU won’t travel far in Arizona to play their next road game against the Arizona State Sun Devils at 6 p.m. Saturday at the Desert Financial Arena in Tempe, Arizona. The game will air on the Pac-12 Network.