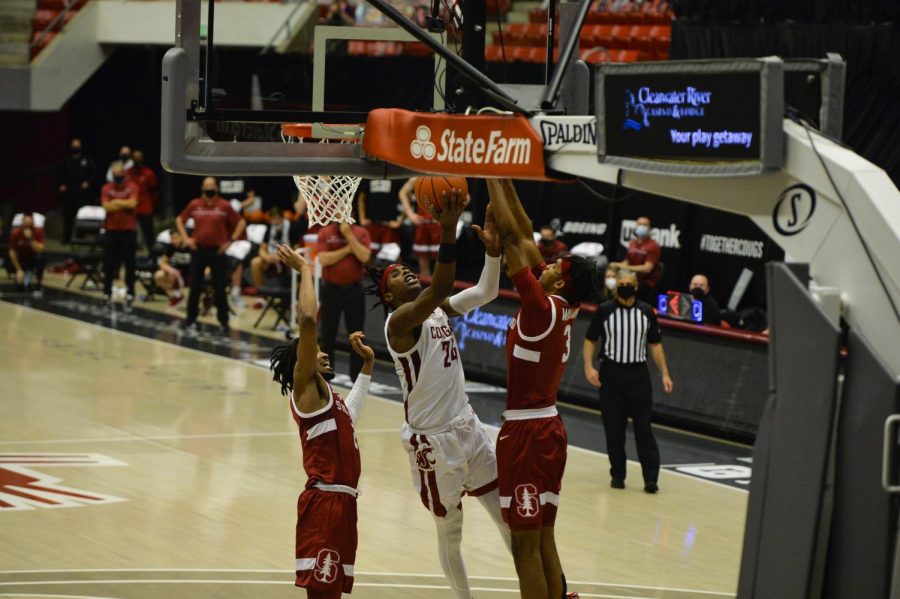 WSU men’s basketball continues its road trip versus the Arizona schools with a matchup against the Arizona State Sun Devils at 6 p.m. Saturday at the Desert Financial Arena in Tempe, Arizona.

This will be the first time this season that WSU (14-11, 7-11) and Arizona State (9-11, 6-8) play each other. Initially, this game would’ve been the second matchup between the two schools, however, the first contest earlier in the season was canceled due to issues with COVID-19 protocol for the Sun Devils.

Now WSU and Arizona State will finally face off, and they will face off once more this following Monday to make up for the postponed game.

Unlike his record against the University of Arizona, WSU head coach Kyle Smith has defeated the Sun Devils before after splitting last season’s series. Following the loss to Arizona on Thursday, Smith said the Cougars will quickly get back into the preparation phase for the Sun Devils.

“We had a lot of games down the stretch here, and hopefully we’ll have a great effort,” Smith said.

Senior guard Isaac Bonton and sophomore guard Ryan Rapp each returned from injury in WSU’s last game against Arizona. Bonton had just three points on 19 minutes played off the bench, while Rapp just played a minute on the court.

Smith said Bonton’s status for Saturday, as well as Monday, will strictly be up to Bonton’s rehab progress and if he can fit well with the rotation. Rapp remains a bit of a question mark for his status against Arizona State this weekend.

Arizona State’s leading scorer this season is once again senior guard Remy Martin. Martin’s 21.2 points per game currently lead the entire Pac-12 and rank ninth in the nation. On top of it all, Martin has been on a scoring tear as of late, posting an average of 27.5 points per game in the month of February.

Smith said he wants to have as much of a guard presence as possible to contend against Martin and the Arizona State backcourt to have a shot at victory.

“It’ll be tough, Arizona State is so quick,” Smith said. “They’re hard as heck to guard, and they put a lot of pressure on you. It’s good for us, we got to get better against those types of teams.”

However, the Sun Devils have gone just 3-3 throughout February with two of their wins coming against the Washington Huskies. Arizona State averaged almost 90 points as a team in their pair of wins over the Huskies with two players recording at least 20 points apiece.

The other player that had back-to-back 20-point performances alongside Remy Martin is senior forward Kimani Lawrence. Lawrence not only scored 21 points against the Huskies, but he pulled down a whopping 20 rebounds. In the first game against Washington, Lawrence recorded 12 rebounds.

Lawrence averages over 20 points per game in his previous three games for the Sun Devils. However, his presence on the boards may be mitigated due to WSU’s presence on the glass. WSU’s 37 rebounds per game remain as one of the best rebounding averages in the conference. As Lawrence put up back-to-back double-doubles against the Huskies in the past two games, Washington remains the worst team in the Pac-12 in rebounds per game as a team.

Even with the Sun Devils’ highlights as of late, Arizona State sits in eighth place in the conference standings, just one spot ahead of the Cougars.

The matchup between Arizona State and WSU has been fairly even as the Cougars hold a 40-43 all-time record against the Sun Devils. In fact, their last 10 matchups are split right down the middle with each team recording five wins.

“We’ve played fairly well on the road,” Smith said. “So we’ll see how we’ll do against [Arizona State].”

Tip-off will commence at 6 p.m. Saturday at the Desert Financial Arena in Tempe, Arizona. The game will air on the Pac-12 Network.