Cougars will now head to Las Vegas for Pac-12 championship 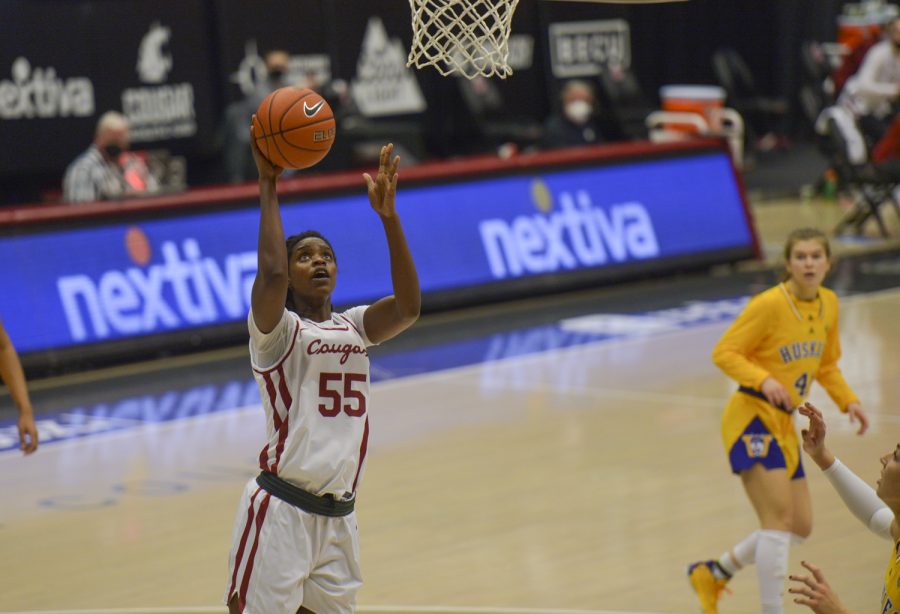 The WSU women’s basketball team finished their regular season at home this weekend, as they defeated their cross-state rivals, the Washington Huskies, 61-52 at home.

Both schools walked onto the court wearing throwback uniforms from the 70s. The Huskies wore yellow with a throwback logo while the Cougars came out rocking white and a vintage red font.

The Cougars struck first with back-to-back threes from sophomore guard Johanna Teder, while freshman guard Charlisse Leger-Walker continued her hot streak as she got on the board for the Cougars.

The Cougs jumped out to an early lead to start the game, but the Huskies came back to make it a close game against their rivals. At the end of the first quarter, WSU led 17-16.

Teder led the Cougars in first-half scoring with 10 points in the first quarter, as the Cougs jumped out to an early lead to start the game.

However, in the second quarter, things started to fall apart for WSU as they turned the ball over three times in a two-minute span to give Washington a breath of fresh air, allowing them the chance to take a large lead.

As the Huskies built their lead, WSU could not keep up, and despite the Cougar defense being able to hold Washington scoreless for three minutes during the second quarter, the Huskies took a commanding halftime lead of 35-27.

To start the second half, WSU struck first with a two-pointer, but for every bucket WSU scored, Washington matched them.

The Cougars found themselves down by ten a few minutes into the third until a coast-to-coast by Teder shifted the momentum. That sparked a 14-0 WSU run, and the Cougars took the lead for the first time since the first quarter.

As the third quarter expired, the Cougars held a one-point lead of 45-44 in the final game of the regular season.

As the final quarter of the Apple Cup series began, sophomore center Emma Nankervis scored the first points of the frame for the Cougs.

Teder continued her dominant performance, sinking two free-throws to put the Cougars over 50 points in the game. She eclipsed 20 points with two more free-throws to follow that up.

Sophomore center Bella Murekatete cracked double-digit points with her fifth bucket of the day from inside the paint.

That strong finish is how WSU ended their regular season, as the Cougars beat the Huskies, 61-52.

Teder led the Cougs in scoring with 23 points, followed by Charlisse Leger-Walker and Murekatete, who had 13 and 12 points, respectively.

“Across the board, I thought our team was dedicated and committed to being successful today,” Ethridge said.

Following this win, the Cougars will take on the Utah Utes at 5:00 p.m. Wednesday in Las Vegas for the first round of the Pac-12 tournament. The game can be streamed through the Pac-12 website.