Federal Bureau of Investigation has released its list of cults to watch out for, you won't guess who is on it 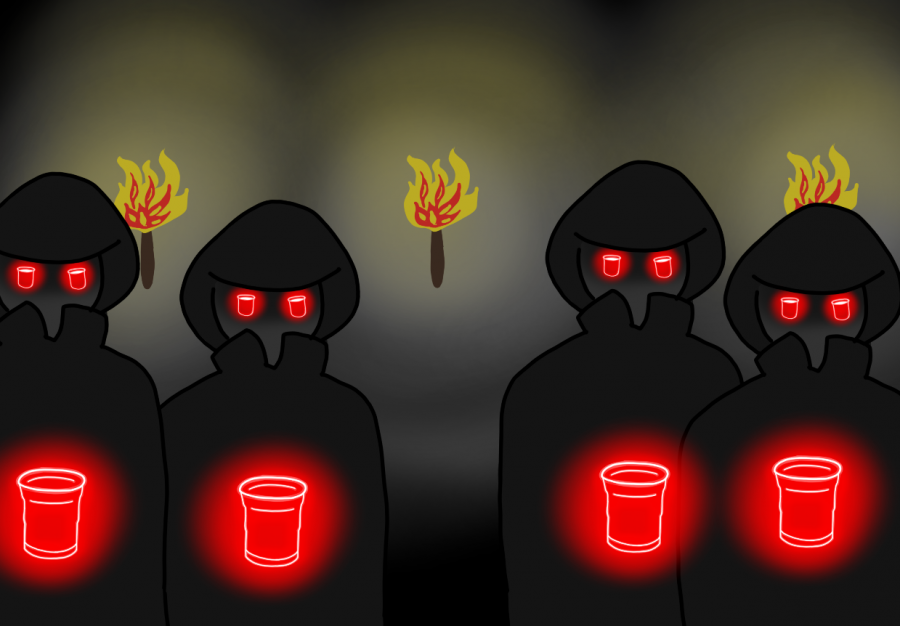 What lies behind those glowing eyes, and what is in those solo cups?

Recently, the Federal Bureau of Investigation released its list of top organizations classified as cults. This list included: Blockbuster members, frequenters of Applebee’s and fraternity and sorority members. A few names of known fraternities and sororities are listed as SOH, CAH, TOA.

Although most sorority and fraternity practices have been suspected of participating in cult-like activities, a past RUSH survivor of Yeet Kappa Yeet (YKY), Share Horetiwitz, was able to give insider information to the FBI about the truth behind these rituals.

“Like, when I was rushing YKY, I made it to the final stage of initiation,” Horetiwitz said. “They had me put on a black robe and made me pledge allegiance to the president of YKY, James P. Sullivan.”

She gave a detailed description of initiation in horrific detail. After this, things took an even stranger turn, she said.

“I had to hold up a Mike Wazowski plushie above a burning fire,” she said.

The member leading the initiation, “Fat Mamie,” then levitated over the fire with her arms outstretched and her eyes rolled back into her head, Horetiwitz said.

“Fat Mamie” started singing the YKY recruitment song in Latin. Other fellow members joined in, holding hands and swaying back and forth in unison.

“It was totally not fetch,” Horetiwitz said.

At the end of the meeting, Horetiwitz said they asked her to pay a large sum of money to initiate new membership, which the local police said is a common practice among cults.

“YKY also wanted me to pay a fee? As if! They should be paying me,” Horetiwitz said.

Horetiwitz narrowly escaped the cult after a wild tailgate party.

“While everyone was buzzed, I took off my pink furry heels and made a break for it!” Horetiwitz said.

After tripping over a drunk couple making out, she made it into the woods and was able to make it to the Pullman Police Department headquarters.

The video attached shows a common practice among sororities. These habits and expressions are considered to be “cult-like” and “honestly terrifying” said FBI agent Jackal Smolder.

He said to look for common signs of possession amongst sorority and fraternity members. Smolder referenced the video above.

“Notice the girl on the left, how her mouth gapes open into a black hole,” Smolder said. He also pointed out the synchronous clapping and sorority members’ eyes glazed over in the video.

“This clapping summons a much darker entity that we cannot fathom,” Smolder said.

Agent Smolder said to look out for other tell-tale signs to see if your fellow classmates are part of a fraternity or sorority:

“If you notice one of your classmates displaying this kind of behavior, contact the FBI immediately,” Smolder said.

Cults have been the source of fascination for many people. Little did they know that a cult might be in their own backyard — Pullman. They could try to recruit you with the promise of parties and beer, but beware, it might be more sinister than that.