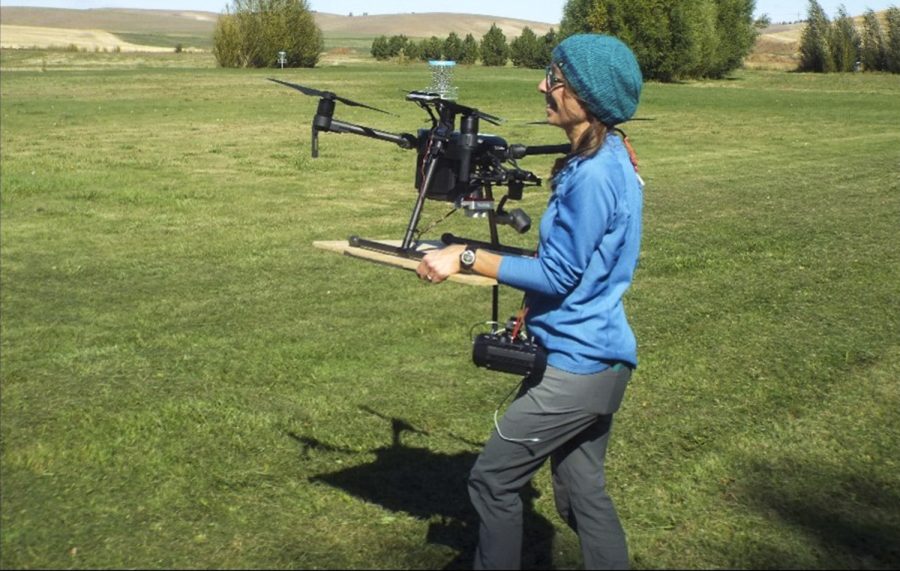 Stahl said she developed a computer code script in Javascript so conservation districts can more easily select a desired date and location to monitor changes in the environment over time.

Fremier said the conservation districts often qualify for funding. However, it is hard to monitor how effective the actions made by the districts are in promoting healthy ecosystems.

He said conservation districts are required by the state to conduct analyses to detect change in land cover every year. Three Washington state counties — Whitman, Garfield and Walla Walla — are currently using the monitoring practices.

Last year, the counties submitted a monitoring report to the Washington State Conservation Commission with the data collected by the WSU research, Fremier said. The commission will determine if counties can use the monitoring technology in the future.

Typically, farmers and conservation districts conduct ground-based monitoring where plants are counted and measured, which is costly and time-consuming, Stahl said.

“The agriculture community can really use this [new] data to better understand environmental change,” Fremier said. “The data is sitting out there. With some technical expertise, it’s a really valuable resource.”

The team is working to create a website so conservation districts can easily access the satellite imagery without running the code themselves, Stahl said.

Satellite imagery for monitoring first became available in the 1970s, Fremier said. The resolution of the images has improved significantly; originally, people could see about 90 meters away from the ground, but now it is possible to see about 10 meters away.

New photos are taken about every week, he said.

The imagery, extracted by Stahl’s code, can be used to look at changes in greenness over time or changes in riparian vegetation, which are plant habitats found alongside rivers and streams, Stahl said.

Stahl said the second part of the project included flying consumer-grade drones above the WSU Hudson Biological Reserve at Smoot Hill and about nine farms. Whitman County farmers volunteered to participate in the study.

“It opens up new opportunities to explore and see how far we can get to meet some of the monitoring needs for eastern Washington,” Stahl said.

Fremier said it took researchers several trips, and only one crash, to perfect the technical aspect of flying the drones, like maintaining the correct height and angle.

After learning how to operate the drones, the team started measuring vegetation on the properties, he said.

The drones have sensors that can capture three-dimensional images of the land, detailed enough to show vegetation species, he said.

Stahl said residents were concerned about privacy issues with drones being flown in their area.

“These days, pretty much anyone can pull up a satellite image on their phone using Google Earth that’s higher resolution than what we’ve been using to look at,” she said.

COVID-19 halted the researcher’s ability to go out in the field, Fremier said. However, the team continues to analyze data and plan for the next installment of the project.

The WSU Center for Sustaining Agriculture and Natural Resources awarded the BIOAg grant to fund this research on sustainable agriculture, Fremier said. The BIOAg project extended funding for Fremier, which will allow them to implement the technology in other Washington State counties.

“The conservation districts were excited about a new way to document the positive changes they’re making,” Fremier said. “Hopefully, it secures more support for future actions and maybe even persuades some of their neighbors to join in.”