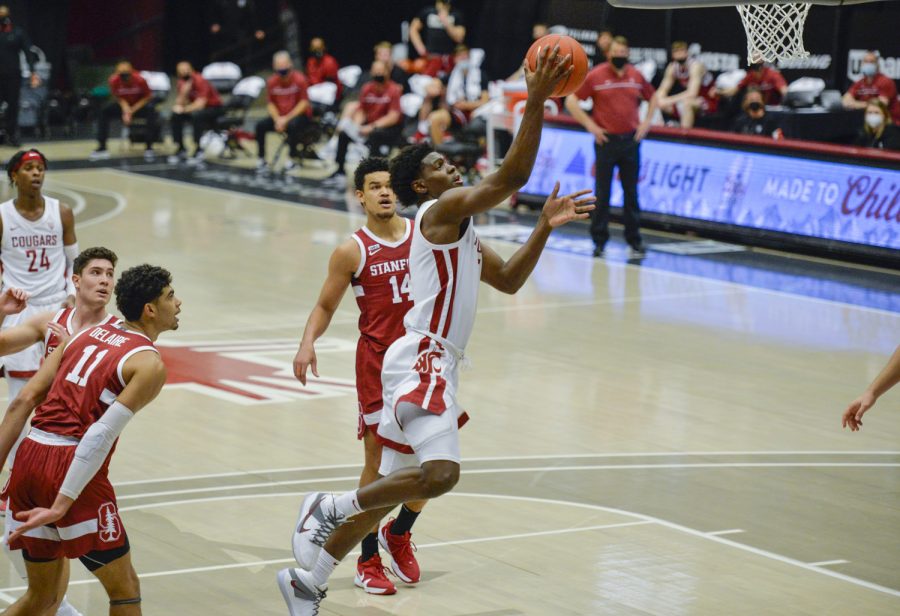 Freshman guard TJ Bamba drives to the hoop around a defender in hopes of a layup against Stanford on Feb. 20, 2021 in Beasley Coliseum.

During all of WSU’s obstacles involving COVID-19, the men’s basketball team is facing a slight speed bump that can potentially end their regular season.

On Monday, the Cougars were supposed to face the Arizona State Sun Devils for the second time in less than 48 hours. However, come just an hour before tip-off, the game was postponed because of “recent health and safety developments within the Washington State basketball program,” accoring to WSU Athletics’ official statement.

WSU head coach Kyle Smith did not give any specifics on what happened within the program that forced the cancellation. But he said it is frustrating as a team to have games suddenly postponed moments before taking the court.

“It’s hard to prevent those things, they pop up,” Smith said. “It shakes you a little bit, and that’s been the only thing that’s been kind of jarring to us this year; it’s happened two or three times.”

Smith said there is still a possibility of rescheduling the ASU game for Monday, before the Pac-12 tournament.

Some other good news for Coug fans: senior guard Isaac Bonton will likely make his full return by the time WSU tips off next. However, Smith said Bonton’s ankles have been tricky for him to recover from this season, so nothing is dead set on his participation in the tournament just yet.

The first day of the 2020-21 Pac-12 Tournament will be on March 10. The tournament consists of all 12 teams across the conference, and it is a single-elimination bracket. The top four schools in the conference standings will receive a first-round bye and the remaining eight teams will face off with one another for the first round based on their seedings. The top four teams that received the first-round bye will then face the winners of those matchups based on the seeding of the matchups.

Now the current top four schools in the standings — UCLA, Oregon, USC and No. 24 Colorado — will remain in the top four regardless of the regular-season finale this weekend. The remaining teams, however, are still battling somewhat for their seeding.

The Cougars sit in 10th place, which is three conference wins ahead of Washington, and tied with Utah and Arizona State. However, Utah and ASU defeated WSU at some point during the season, which grants them the jump ahead of WSU in the standings.

Whether or not WSU plays ASU before the conference tournament, this is the first time since 2011 that the Cougars will enter the tournament with an above .500 record.

According to Smith and current standings, the Cougars will likely face the Sun Devils or the Runnin’ Utes in the first round of the tournament next Wednesday. Smith said his coaching staff is already going through their preliminary scout of the first round.

“My staff is nuts, they’re all over it,” Smith said. “It was fun last year, we played well. So hopefully we can get the same type of prep.”

Smith said the team feels somewhat settled heading into the tournament, but injuries are obviously the one thing holding the Cougars back.

“I like to compete, I like to have games, and I get disappointed when we don’t get the chance to get out there,” Smith said. “This group has been pretty fun, just watching these young guys grow up, they’ve done a great job.”