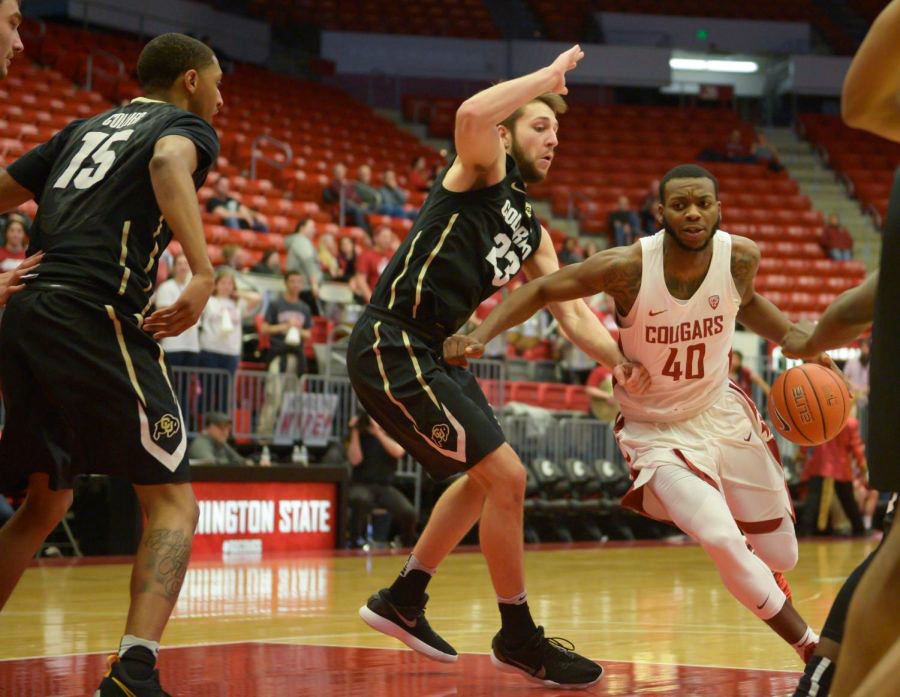 No. 24 Colorado earned the top ranking after knocking off USC and UCLA last week.

The end of the Pac-12 men’s basketball regular season is on the horizon, with just a few more games until the Pac-12 tournament starts on March 10 in Las Vegas. Ever since our last power rankings article on Feb. 11, there has been plenty of movement throughout the whole conference, including big upsets against top dogs USC and UCLA. Here are the final power rankings of the 2020-21 regular season:

After a shaky start to Pac-12 play, the Colorado Buffaloes have kicked it into gear as of late. They are currently on a three-game win streak, but more notably, two of those wins came against USC and UCLA. Due to their hot streak, Colorado earned themselves the No. 24 ranked team in the nation, making them the only Pac-12 team in the AP Top 25. The Buffaloes have been led this season by senior guard McKinley Wright IV, who leads the team with 15 points and 5.8 assists per game. The biggest aspect of the team is their defense, as they have allowed a conference-low 63 points per game this season. Make sure to keep an eye on these red-hot Buffaloes as they head into the conference tournament.

Similar to Colorado, the Oregon Ducks are another team that jumped up in the rankings due to their tear through the conference. The Ducks are 9-1 since their loss to WSU on Feb. 4, which has helped put them as the current No. 1 seed in the conference. Oregon’s biggest victory as of late came against the Bruins on March 3. The Duck’s leading scorer, senior guard Chris Duarte, put up 23 points in the victory. With a hot offense and the No.1 seed heading into the tournament, the Ducks could pose as big threats to the other top teams in the conference.

USC has been the most focused on team in the Pac-12 this season by far, with the Trojans even leading our power rankings for the majority of the season. As of late, USC has hit a bit of a rut after falling to Colorado and Utah in less than a week’s span. Despite their recent struggles, the Trojans have the biggest upside out of anyone in the conference due to their multiple weapons. Freshman forward Evan Mobley, a projected top NBA Draft pick, is one amongst many talents that could easily put this squad on top at the end of the tournament.

The UCLA Bruins are another team that has shown very high potential but have just not been themselves in recent weeks. The Bruins are riding a two-game losing streak after falling to Colorado and Oregon, both of which were on the road. Of UCLA’s seven losses this season, six of which have come on the road while only winning five road games. The Bruins are also just 1-3 against Colorado, Oregon and USC this season, with their only win coming against the Buffaloes on Jan. 2. UCLA’s last regular-season game against USC on March 6 will be a true test to see if they are ready to compete with the top teams in the conference in Las Vegas.

The Arizona Wildcats have been an offensive-first team throughout the majority of conference play, as the Wildcats lead the Pac-12 in three-point percentage and are second in points per game. Arizona had been playing really well as of late, even knocking off USC on Feb. 20, but a recent loss to Oregon put a thorn in their side as they head into the tournament. Luckily for Arizona, if they remain the No. 5 seed heading into Las Vegas, they’ll get to play the No. 12 Cal Golden Bears due to the first four seeds earning a first-round bye.

The Oregon State Beavers have been tough ones to judge this season due to their inconsistent play. The Beavers have knocked off top schools like Oregon and UCLA but just haven’t been able to string together a group of wins to show if they really are a threat in the conference. They also sit in the middle of the Pac-12 in almost every offensive and defensive statistical category, which explains why they’ve been stuck in the middle of the power rankings all season long. The Beavers have a good chance against likely tournament opponent Washington due to the fact they won their only matchup this season by 20 points.

The Stanford Cardinal are not looking sharp heading into Las Vegas, as they are currently riding a four-game losing streak. On the bright side, two of those losses came against Oregon and USC, with the others being against WSU and OSU. Senior guard and possible Pac-12 Player of the Year Oscar da Silva has been nothing short of spectacular for the Cardinal this season, averaging 18.8 points and 6.8 rebounds per game. Stanford will look to ride da Silva into the tournament in hopes of a championship run.

The Utah Utes are another team no one can seem to figure out. They had more than impressive wins against USC, Arizona and Colorado, yet have fallen to some of the bottom feeder teams like Washington and Cal. Utah is set to play one last regular-season game against Arizona State on March 6 which will end up determining their seed heading into the tournament. Win or lose, the Utes will need to play with a bit more consistency if they want to make it deep in the tournament.

The Arizona State Sun Devils have been dealing with COVID-19 issues all season long, playing a conference low 21 overall games. The Sun Devils have also not lived up to their expectations this season after being ranked the 18th team in the nation in the AP Top 25 preseason rankings. Despite the non-ideal season, ASU is still an offensive powerhouse, leading the Pac-12 in points per game with 76.2. Senior guard Remy Martin is also the Pac-12 leading scorer in points per game, averaging 21.3. This team has the potential to be dangerous in tournament play if their offense stays clicking.

The WSU Cougars have certainly been an exciting team to watch, headlined by their triple-overtime win against Stanford on Feb. 20. The Cougars also have two huge wins against UCLA and Oregon but dropped two straight against the Arizona schools last week. On the bright side, senior guard Isaac Bonton is likely to fully return to the lineup when WSU plays next. The Cougars are a team to keep an eye on due to their current health issues, which caused their game against ASU on March 1 to be canceled. If the Cougars can improve their health in time for the tournament, their sneaky ability to beat anyone on any given day could cause problems for other teams.

This has been a letdown season for the Washington Huskies, to say the least. UW managed to only put together four conference wins on the season, with oddly enough, one coming against the Colorado Buffaloes. The Huskies defense has allowed a conference worst 76.6 points per game and only scored 66.6 points per game, which is only better than Cal. Needless to say, that combination of statistics is the perfect formula for a less than ideal season.

The California Golden Bears will head into the Pac-12 tournament with a four-game losing streak, with their last win coming against, ironically enough, Colorado. Cal’s offense has been what’s gotten them into trouble this year, as the Golden Bears rank dead last in almost every category. Cal will most likely face off against Arizona in the first round, in which they lost by 21 points in their only contest.