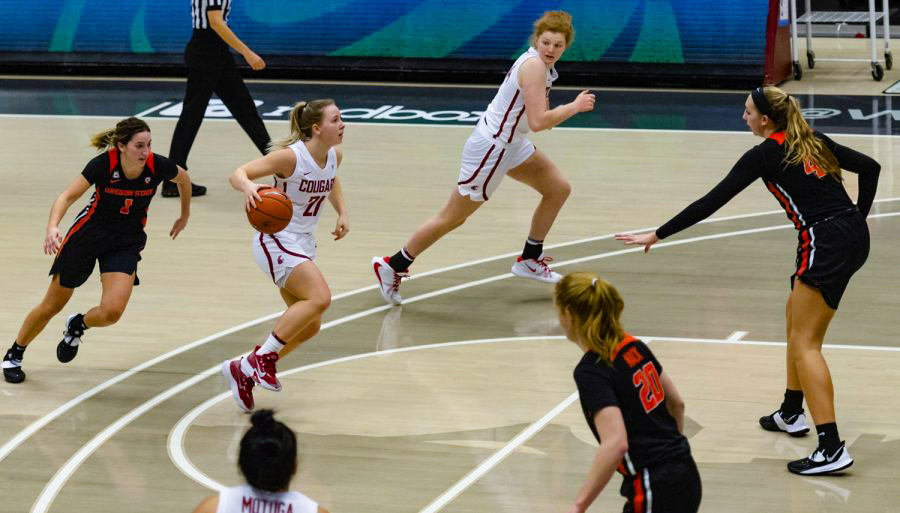 Sophomore guard Johanna Teder drives towards hoop as she looks for open teammates.

Another Friday has rolled around, which means it is time to take a look at what the weekend and coming week holds for all of the WSU sports fans.

All Day – The Cougars cross country team competes in day one of the Pac-12 Cross Country Championships. The event is at Chambers Creek Park in University Place.

1:30 p.m. – No. 47 tennis gets back in action following their victory last weekend. This time, they will be hosting No. 6 UCLA in Pullman. This is the first and only time that these two are scheduled to meet this season. WSU will be looking for their third win all-time against UCLA, as they hold a 2-29 record against the Bruins. While it is expected that WSU will livestream the games, they have yet to announce where it will be streamed at.

3:05 p.m. – Baseball returns to Bailey-Brayton as the Cougars get a surprise home opener against the Seattle Redhawks. The series was originally scheduled to be played at Seattle’s Bannerwood Park, but due to rain on the Westside, it has been moved to Pullman. The Cougars have had a hot start to the year and will look to keep things going against Seattle. This will be the first of six scheduled games between the teams this season. WSU holds an all-time record of 16-9 against Seattle, including an 8-4 record when playing on the Palouse. The game will be live-streamed by the Cougars.

8 a.m. – Rowing returns in 2021 as the team kicks off their campaign with the Apple Cup Dual in Lake Las Vegas. Henderson, Nevada, will also host the Pac-12 Invitational in April. Washington has one of the historically most dominant crew teams in the nation. Unsurprisingly, the Huskies come into the season atop the CRCA Preseason Poll. While not as storied, WSU has a great program and comes into the season No. 19. The Cougars will be looking for an upset Saturday morning. As of now, it does not appear it will be streamed anywhere, but stay tuned to WSU feeds for updates about the event.

Also at 8 a.m. former Coug Malachi Flynn and Raptors 905 face the Lakeland Magic, an affiliate of the Orlando Magic, in the regular-season finale. The game will consist of a battle of Cougs as Robert Franks is currently playing for the Lakeland Magic. This will not be the last appearance for Raptors 905 this season, as the G-League is holding a single-elimination tournament that Raptors 905 have qualified for with the league’s best record. This game will be live on ESPN+.

2:05 p.m. – Game two of the Cougars versus the Redhawks takes place on the diamond. WSU is 2-0 in game two meetings so far this season. The game will be live-streamed by the Cougars.

All Day – Men’s golf returns to action following their second-place finish at The Joust two weeks ago. The Cougars head down to Bandon, Oregon for the Bandon Dunes Championship. Live stats can be followed on GolfStat.

11 a.m. – It will be another tough one for the No. 47 ranked tennis team, as they host No. 16 USC to close out their weekend doubleheader. Just like with UCLA, this is WSU’s first and only scheduled meeting with the Trojans. However, the Cougars have an even worse record against the Trojans, holding just a 1-25 record all-time. The one win came three years ago in March 2018. It is expected that this will be live-streamed, but WSU has not announced where yet.

12:05 p.m. – Baseball closes out their three-game series with Seattle. This will not be the last time they see the Redhawks, however, as the Cougars are traveling to Seattle next weekend, as well. The game will be live-streamed by the Cougars.

4 p.m. – While nothing is set in stone, it does appear that WSU will be playing as the ten seed when the Pac-12 Men’s Basketball Tournament rolls around. That gives them a 4 p.m. slot in the first round. As of now, it seems like they will play Stanford. However, if Oregon State loses to Oregon on Sunday, they would drop back to play WSU, as Stanford holds the tiebreaker over the Beavers. No matter who WSU plays, the game will be live on the Pac-12 Network.

1 p.m. – WSU baseball gets back on the field once again as they kick off a packed weekend that consists of four games in three days against the two Seattle schools. Thursday kicks it all off with a fourth straight meeting with the Seattle Redhawks, this time in Seattle. No streaming links are available yet, but it will most likely be on the WAC Digital Network.

4:30 p.m. – Cougar alum Aron Baynes and his Toronto Raptors get back on the court in Tampa, Florida, following the All-Star Break. The Raptors will be hosting the Atlanta Hawks. Atlanta only features one Pac-12 alum in their rotation at the moment: Arizona’s Solomon Hill. The game can be watched on NBA League Pass.

5:30 p.m. – This is where things get tricky. We know that if WSU wins as the ten seed on Wednesday, they will play the two seed at 5:30 on Thursday. Who that two seed is going to be is entirely up in the air. As of now, USC sits in that spot. However, with a win for the Trojans against UCLA and an Oregon loss to Oregon State, the Ducks would drop back to that No. 2 slot. Similarly, if UCLA beats USC on Saturday, and UCLA leapfrogs USC to take the two spot. In that scenario, an Oregon loss would still drop them to the second seed. No matter which of those three take the two spot, the game will be live on the Pac-12 Network.

7 p.m. – CJ Elleby and the Portland Trail Blazers play host to the Phoenix Suns. Phoenix features just one Pac-12 alum on their team with Arizona’s Deandre Ayton playing down low. The game is available on NBA League Pass.

TBD – Tennis gets back in action as well, as they host the Utah Utes. There is no official time given for the match yet. WSU holds an all-time record of 9-8 against Utah. There is also no official stream info out yet, but WSU will likely stream the event.