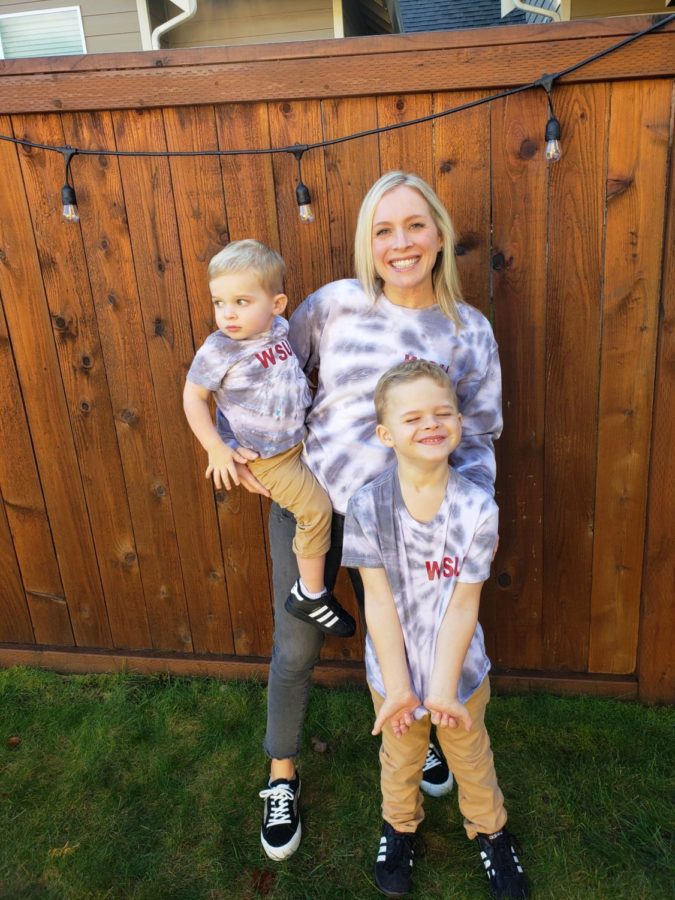 Katelyn Babbitt says the most exciting thing about having an Etsy shop is the customers enjoying the products.

When the COVID-19 pandemic hit, people were left with extra time on their hands to pick up old hobbies.

“I started making them just for myself and my kids and then we decided we could only have so many tie-dye shirts,” she said. “I decided to start the Etsy shop just for something fun to do.”

Initially, Babbitt was just playing around with random colors, but being a WSU alumna herself, she wanted to make something that spoke to the Coug customers.

She started off with crimson and gray for the colors, but the crimson bled through and made everything pink. She decided to work with grey as the main color and ironed crimson letters on the shirt.

“I started making them for friends and then started selling them online,” she said. “I have kids so I wanted to be able to [make shirts for kids] also, not just adult shirts. I started doing the kids’ T-shirts and I have onesies.”

She said her oldest son is six years old, so while she lets him help make shirts for family members, she avoids letting him help with the ones she sells online.

Her favorite products are the Coug shirts. The most exciting thing about having an Etsy shop is the customers enjoying the products, she said.

“The excitement when people get it [is] always flattering. When you’re doing something [like this], you’re always nervous if someone’s going to like it,” she said. “So seeing my family and friends get excited about it has been nice.”

Andrea Hampton, customer and Babbitt’s friend, said she enjoys the products just as much as Babbitt.

She said she has an indigo sweatshirt, a long sleeve WSU shirt and some children’s T-shirts. She loves the quality and the material of all of them.

“The designs make it just that much more fun,” she said. “They’re just so cozy and really nice material, and they wash really well. If you have kids or you’re running around a lot, it’s nice to just be able to put something on that’s good quality.”

Hampton said Babbitt runs the shop well and is focused on the customers, as well as the products.

“Her first priority is [reaching] out to you right away when she gets your order and [she makes] sure that you didn’t have any questions or special shipping needs,” she said. “She’s just super engaged … and if there’s anything slowing things down she lets you know, which doesn’t happen often.”