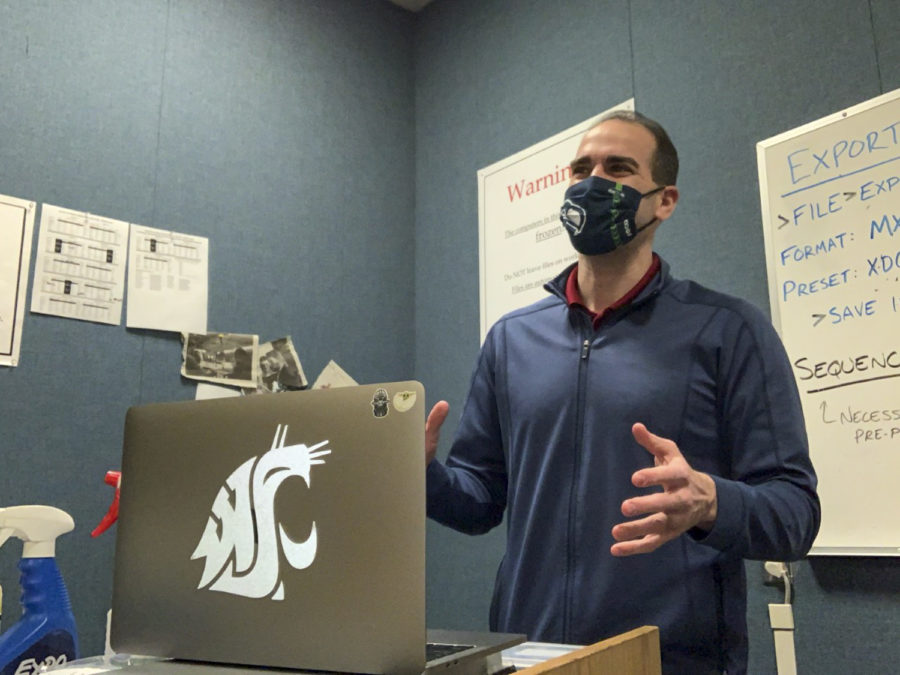 Loveless' goal is to make his classes as engaging as possible. He teaches his classes to prepare his students for the workforce.

The pandemic has not only been hard on students, but it also forced professors to change their curriculum and teaching styles.

Matt Loveless, broadcast journalism professor for the Murrow College of Communication, handled the shift from in-person to online well.

He said he teaches his classes as if his students were training for a career. He said he is concerned about what is going on in the real world.

“When the pandemic hit, watching [police department] news and how it tried to adjust basically overnight in a number of places, I knew we had to do something to make it work,” he said.

Loveless said he adapted his curriculum to allow students to produce professional stories from behind a computer screen. He was able to conduct Zoom interviews and shoot stories on cell phones instead of spending more money on equipment.

Loveless said he has been trying to make his classes more engaging while teaching online.

One way Loveless is able to engage with his students is by using the online platforms he has access to and bringing in guest speakers to his classes.

“We had a really well-done news reporter in our class that sort of popped on at the last second because one of our students sent them a DM on Twitter,” he said. “It’s amazing how quickly we’ve been able to sort of adapt that way.”

Even though he is trying his best to effectively get information across to his students, Loveless said he knows they still get distracted by other activities.

“It’s a lot harder to capture attention when everybody is [distracted]. I’m sure my students are cooking in the background while their Zoom video is off,” he said. “And that’s a reality that we have to sort of manage.”

Loveless said he faced some obstacles while teaching online. He has two kids at home and sometimes has to pause his class to tell them to quiet down.

He also does a lot of work to adapt to running the daily student newscast, “Murrow News 8,” during the pandemic. People work in the studio in person, but they take a lot of safety precautions.

“We’ve had several days where someone has symptoms and we had to cancel a newscast or we had to do something remotely,” he said. “A lot of that is being able to change on a dime.”

Loveless said one of the greatest accomplishments he has seen from his students is their ability to run newscasts from their homes.

If someone tests positive, the studio works together to put on a broadcast online later that afternoon, he said.

“Just because somebody gets sick, the news doesn’t stop. Just because it’s snowing, it doesn’t stop,” he said. “I think that has probably been the biggest accomplishment for the Murrow College broadcasting program.”

Loveless said he knows some other universities have shut down their newscasts because of the pandemic, but his students have thrived. He thinks they have gotten better after overcoming these obstacles.

He said Loveless is consistent with his teaching whether he is in-person or online.

“Some days I forget that Matt’s a professor, he’s just that kind of guy,” Limes said. “He’s just super friendly and flexible with everything and when it came to Zoom, he handled it like a pro.”

When classes went online for the first semester, Limes said Loveless was able to come up with a solution for teaching classes and producing newscasts within a week.

“He’s handled it super well,” he said. “His Wi-Fi lags every now and then, but who doesn’t at this point.”

Limes said he still enjoys the newscast, and it has gone well since the pandemic started, even though it is not all in person.

Last semester, the studio was in person until someone contracted COVID-19, he said. They remained virtual for the rest of the year.

“It’s difficult of course because you like being around people and communicating and it’s easier in person, but it works out in the end,” he said.