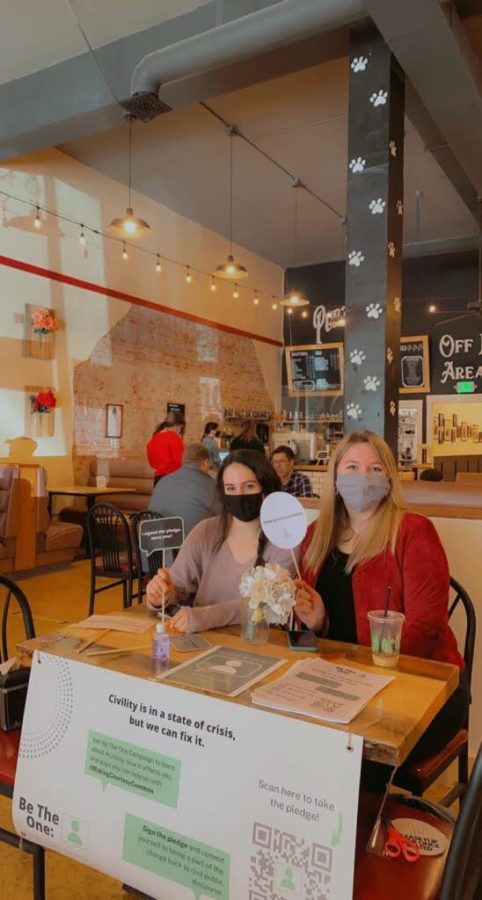 As the 2021 Bateman Case Study Competition comes to a close, a team of WSU students reflects on their campaign that raised awareness about incivility in public discourse and promoted individuals to “be the one” to practice civility.

This year, teams focused their campaigns on promoting civility in public discourse for the Public Relations Society of America, which is a public relations professional organization and this year’s client. The campaigns began on Feb. 8 and end today.

“It takes one person’s actions to start that ripple effect,” Sergis said. “You are the one that can make this change.”

The first goal is raising awareness about incivility, and the second is talking about its effects, like negatively affecting one’s mood. The third goal is promoting individuals to change the way they communicate, especially online, she said.

There were 350 total survey respondents, but only 200 were viable because the others were incomplete, Marquard said. Almost 54 percent of respondents were aged 18-23 years, 13.3 percent were aged 24-29 and nearly 33 percent were over 30 years old.

About 57 percent of the respondents said they witness incivility online at least once a day, he said, and they were most likely to see incivility in comment sections.

“We thought that people just felt that, like, that’s open season for them,” he said. “The comments section was kind of like the arena … like the battlefield.”

They found that one of the main reasons those students used social media was to interact with friends, he said.

It is the little things that made the world a better place, even if that is cliche, Sergis said. Social media should be one of those things.

The interviews helped the team define incivility as hostile or unsociable behavior intended to demean another individual or group, Marquard said.

Marquard said he is a big believer in public discourse. There should not be winners or losers in arguments, instead the ability to have conversations and disagreements would be celebrated.

If people can no longer have conversations, then things are going to “get ugly,” he said.

This is why the team wants to create an environment for people to feel comfortable, Marquard said. They are tired of seeing negativity on social media and they want people to work toward that goal.

The team created a pledge that people can take in support of their campaign. By taking the pledge, people commit to being a part of the change and doing their part to be civil online, said Elise Wimberly, senior strategic communication public relations major and graphic designer.

Sergis said she is proud of the amount of community outreach her team has done.

About 15 people participated in the Kahoot event, Green said. Three gift cards were given away to the top-scoring participants. Every person at the Pups & Cups Cafe who signed the team’s banner got 15 percent off their order.

“The first two people that we spoke to were two older ladies who [were] already in the cafe when we showed up,” Green said. “And they were really impressed to see that there’s even a campaign about the issue because I feel like it’s commonly viewed as something that’s seen but not talked about.”

Green said the campaign is a little personal to her because her family has become politically divided and that affects their conversations.

“I’ve seen that reflected in how we communicate with each other,” she said. “I have family members who won’t talk to me anymore.”

This is one of the reasons the team decided that their campaign would be apolitical. Green said that decision even influenced their color scheme, which is soft-grey green and blush-like beige. The colors are also meant to have a calming effect on people.

Wimberly said she remembers the night before their campaign launched. Her team stayed up together until 3 a.m., going through the website over and over again to make sure it was okay.

Although Wimberly lives in Seattle, she came to Pullman in February to meet her teammates.

“It was really fun to be able to put bodies, I guess, to the Zoom faces and be able to just really talk to them about and see … their personality shine through a little bit more,” she said.

Wimberly joined the campaign after a teacher’s assistant recommended it to her. It began as something she could put on her resume, but it became so much more.

“Now, all the hard work that I put into it, and the bond that I’ve built with my team, it’s something that I’m really, really proud of,” she said. “It’s like my little baby … I just want it to grow and become this huge thing.”

Sergis said she has spent years taking public relations classes, but she wanted to know if she could take on an actual client. Being able to complete this campaign gave her the knowledge that she could enter the workforce and implement another one.

There were, of course, things Sergis said she could have done better during the campaign, like contacting media sources for coverage, issuing press releases, adding to the website or creating a specific post on social media.

“But I think that, big picture, I’ve loved how it has turned out,” Sergis said.

Now, the team is pushing for more people to sign their pledge, Green said. The team’s campaign summary is due at the end of March.

Sergis said their website and social media pages will remain up so people can view the resources and blog posts even after the campaign ends. However, the team will not make any more content or posts after today.

“I would love for people to continue seeing it,” Sergis said. “Just for it to make people pause and think about their actions and how they contribute to everyone’s world online and in person.”