WSU wins one in Pac-12 tournament 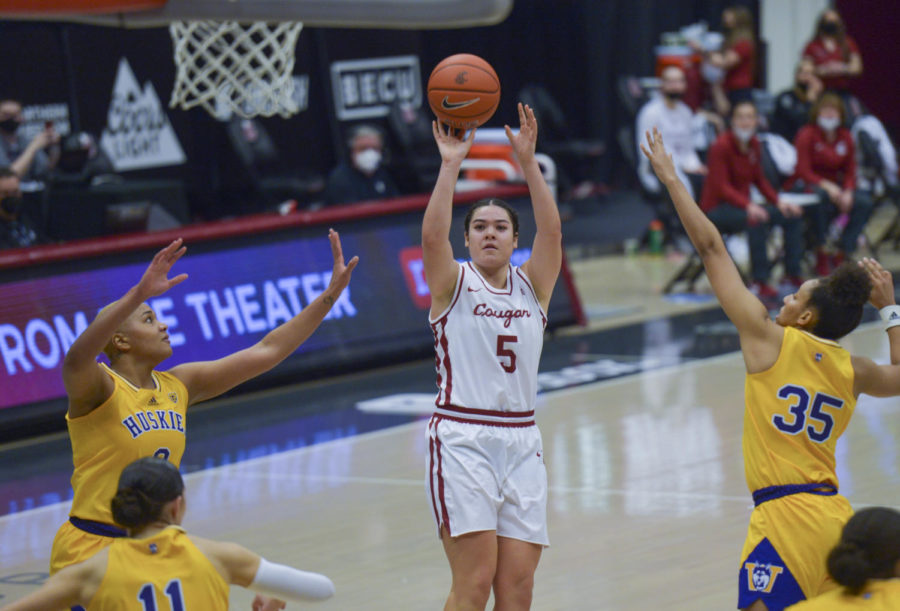 Freshman guard Charlisse Leger-Walker pulls up for a shot over UW defenders in the Apple Cup matchup Feb. 28 in Beasley Coliseum.

The WSU women’s basketball team took a trip to Las Vegas this week. However, they weren’t there to play any schools from Nevada.

Instead, the Cougars participated in the Pac-12 Tournament at Michelob Ultra Arena, playing as the seventh-seeded in the competition. In their first game on Wednesday, they defeated the tenth seed Utah Utes before falling to Arizona on Thursday.

WSU (11-10,9-10) closed their regular season at home with back-to-back wins over Utah, followed by a season finale victory over the Washington Huskies.

Utah (5-15, 4-15) however, suffered five straight losses before their final game of the season against the Colorado Buffaloes was canceled.

“You don’t want to play anyone [in the Pac-12 Tournament] that you recently played,” head coach Kamie Ethridge said.

Utah followed Leger-Walker’s two with a three to take the lead while sophomore center Bella Murekatete responded with back-to-back physical buckets for WSU.

The Cougar’s leading scorer and Pac-12 Freshman of the Year Charlisse Leger-Walker got involved as the clock struck eight minutes left in the first quarter, scoring five points herself in a twenty-second span.

It was Utah who came out playing like the higher seeded team in the first quarter, collecting eleven rebounds and shooting one hundred percent from the free-throw line after a physical opening frame. After the first quarter, Utah led 17-16.

The second quarter started off slow, with neither school scoring for the first three minutes.

A Charlisse Leger-Walker three-pointer gave the Cougs a two-point lead, their first advantage since early in the first quarter.

WSU continued to build on that lead with a 10-0 run lasting the first seven minutes of the second quarter.

The Cougars ran into trouble in the final few minutes of the quarter though, turning the ball over three times and suffering a four-minute scoring drought.

“We didn’t play great offensively,” Ethridge said. “But I thought we were good on the defensive end.”

Murekatete broke the WSU school record for rebounds in a Pac-12 Tournament game as she recorded her 12th, along with another double-double this season.

The Utes turned the tide with an 8-0 run, holding WSU 0-5 from the floor. All of the Utes’ points during their run came from the free-throw line.

The scoring drought ended with a steal by sophomore guard Johanna Teder, who passed it to Charlisse for an easy two for the Cougs. At the end of the third quarter, WSU led 39-31.

Krystal Leger-Walker eclipsed double-digit points to give WSU a 10-point lead two minutes into the fourth.

The Cougars continued to find success for the rest of the game and took down the Utes in the first round of the Pac-12 Tournament, 57-48.

The win was Ethridge’s first in the Pac-12 Tournament, and a big milestone for the WSU women’s basketball program.

The next day, WSU advanced to take on the Arizona Wildcats in the quarterfinals.

Arizona struck first and the Cougars did not get off to the strong start they were hoping for. The Wildcats jumped out to an 11-0 lead in the first five minutes of the game.

WSU finally made it onto the board with a free throw from Charlisse Leger-Walker. Krystal Leger-Walker scored the first non-penalty points of the game with an inside two.

The Cougs turned the ball over 12 times in the first quarter, and Arizona capitalized with 11 points off of the Cougar turnovers.

Arizona took a 19-5 lead into the second quarter.

“[Arizona] made it so hard for us to score points,” Ethridge said.

Despite this, the Cougars matched the Wildcats in points scored in the second quarter with 16 on the board. After the first half, Arizona led 29-21.

“I couldn’t be happier with our ability to limit [Arizona] offensively,” Ethridge said.

The first half ended with a buzzer-beater three by Krystal Leger-Walker, but the start of the second half was very low scoring.

The Cougars took four and a half minutes to connect on a shot but held Arizona scoreless for the first four minutes.

Once WSU scored, the Wildcats kicked it into gear, sparking an 11-0 run.

“I’m really disappointed in how we played on the offensive end,” Ethridge said.

The Cougars shot fifteen attempts from the floor in the third quarter, and only one of them fell in. Arizona led 42-26 at the end of three quarters.

WSU did a great job on the defensive side of the ball and held Pac-12 leading scorer Aari McDonald to one of her lowest-scoring games of the season. Arizona’s tough defense and WSU’s inconsistent offense were the themes of the game, which ended with a 60-44 Arizona victory.

“We got beat by a really good team,” Ethridge said. “Congrats to Arizona.”

WSU’s season is not officially over yet, as the NCAA Selection Committee will choose the participants of the NCAA Tournament on March 15.

WSU has not been to the NCAA Tournament in 30 years, and with a record of 12-11, this is the best opportunity the Cougars have had at breaking the drought in recent memory.