Home for ‘The Technicolor Heart’ in crimson country 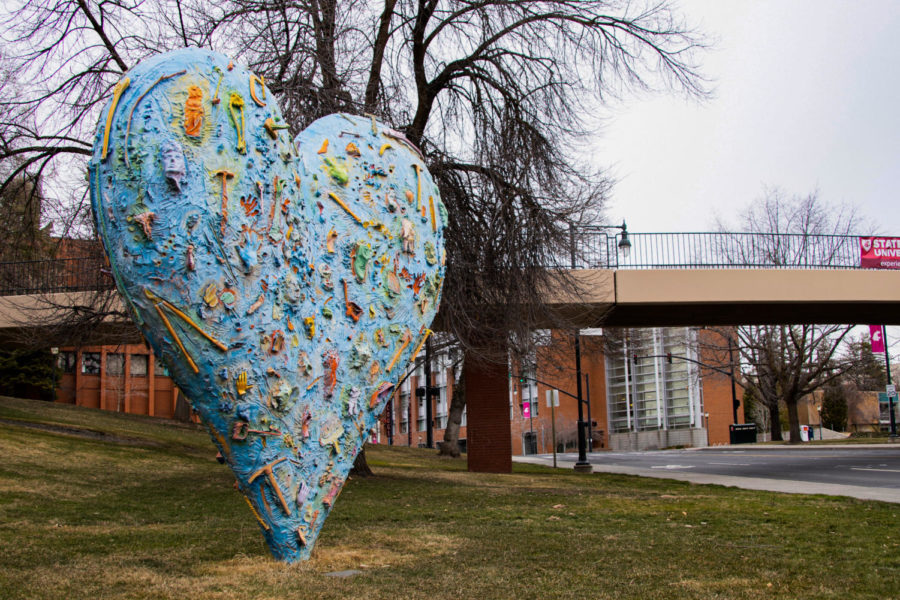 The heart does not warrant the hate it gets.

While the name “Technicolor Heart” may not sound familiar, you’ve seen it if you have been on the Pullman campus. It’s a light blue 12-foot bronze sculpture of a heart adorned in tools — ring a bell yet?

The “Technicolor Heart,” by artist Jim Dine, has had a home on WSU’s campus since its donation in 2004. It has been a topic of conversation since.

Over the past 17 years, the sculpture has been the subject of praise, vandalism, critique and complaints. In 2015, it was voted the Best Art on campus by students, according to The Daily Evergreen.

The sculpture is made of bronze but painted blue with enamel paint. It is inlaid with tools, clothes and other objects that illustrate Dine’s life growing up in a hardware store with his grandfather.

In 2014, a series of Dine’s prints were donated to WSU, said Debby Stinson, marketing and PR manager at WSU’s Jordan Schnitzer Museum of Art.

The state’s Art in Public Places program then donated the sculpture to WSU to be a permanent installation.

Even WSU’s acquisition of the artwork was controversial, said Squeak Meisel, WSU sculpture coordinator and chair of the fine arts department.

“I fielded lots of calls of irritation because people thought it was paid for by student fees, which it wasn’t,” he said.

The AIPP program requires one-half of one percent of funding for public buildings goes toward public artwork, Stinson said.

The sculpture has remained at WSU since its return from Grand Rapids, Michigan, in 2011 after an event at Frederik Meijer Gardens and Sculpture Park, Stinson said.

Dine is one of the most famous artists of his generation, and criticism for the sculpture does not affect its aesthetic or artistic value, Meisel said.

“Aesthetics are complex and depending on the things you’ve studied or learned you can have new perspectives opened by art,” he said. “Art makes the invisible, visible.”

The community’s love or hate for the artwork is one of the most relevant things about the sculpture, Stinson said.

“It doesn’t matter if somebody loves art or hates art,” she said. “Part of the purpose is to stir emotion. I think apathetic would be the most dismaying reaction.”

After a donation of Dine’s prints in 2014, WSU houses one of the largest Jim Dine collections in the world, including The “Technicolor Heart,” she said.