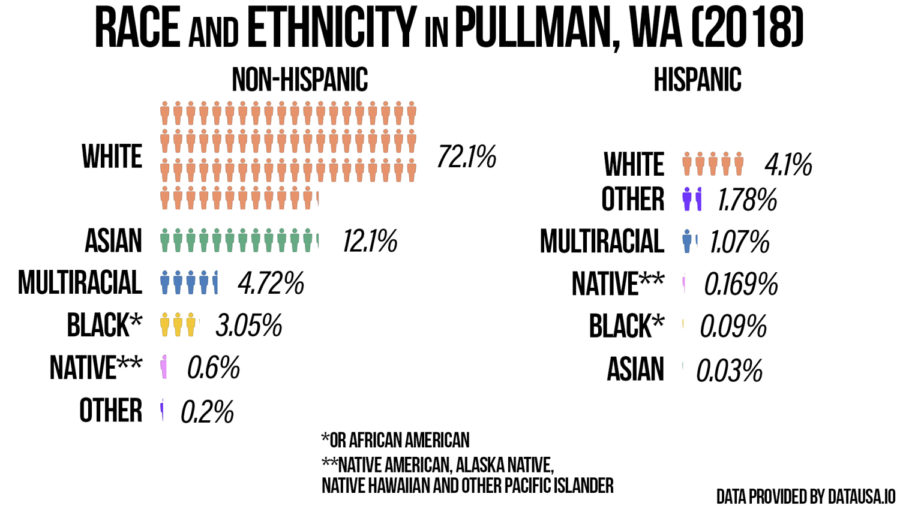 As a result of the Black Lives Matter movement’s reemergence in the media, towns and cities worldwide have rallied their council members and representatives to show their support through public art pieces.

Washington D.C. laid a massive painting of the words “Black Lives Matter” down its main thoroughfare that sent a message of national unity. Spokane commissioned a painting by local artists that brought people of color together to support the movement.

In Pullman, however, the city council is caught up in the process rather than the end goal. Months after the first suggestion of a Black Lives Matter mural at a council meeting in July, they have decided to start at square one … after an artist’s mural had already been chosen by the public.

The Pullman Arts Commission, who did not respond to a request for an interview, was asked to commission a mural with the idea of “End Racism Now” at this first council meeting on the topic.

They did so, allowing multiple artists to submit multiple ideas for such a mural. The public then cast votes on these art pieces through social media forums, culminating in the popular choice of Jiemei Lin’s mural submission.

Lin, who most recently contributed to the Black Lives Matter mural commission in Spokane by painting the first “T,” has pursued a career in art for many years.

Lin is a senior graphic designer for the WSU College of Education and has done several large public art pieces in Spokane, Pullman and Cincinnati, Ohio.

When Pullman’s city council first commissioned this mural, Lin was confused as to whether or not they really wanted a public art piece that clearly stated “Black Lives Matter.” In the end, Lin decided she could not leave that all-important phrase out.

“I truly believe that this mural in response to all of this murder and suffering has to say ‘Black Lives Matter,’” Lin said. “It’s a joke if you don’t say that.”

At their council meeting on Feb. 23, the city council voted to scrap the entire commission — despite multiple council members pushing for the use of Lin’s mural regardless of any mishaps in planning on the council’s part.

The process of this mural commission has been arduous for everyone involved. In the meeting, the council admitted to the miscommunication on their part, which led to the Pullman Arts Commission’s approach to their call for artists and the subsequent vote on a mural.

They have much more to apologize for, including the out-of-touch comment made by Councilmember Al Sorensen,  who asked if we really need a mural to state that some lives matter more than others.

“If you have to ask if all lives matter, then you really don’t understand what Black Lives Matter is all about,” Councilmember Ann Parks said.

The fact that this meeting began with such a comment shows how far behind our city representatives actually are.

Unfortunately, although there are some who seem to understand the purpose of this mural as part of the greater message of unity Pullman government wants to send, the council as a whole has managed to alienate the same people they wanted to support.

Their collective actions have pushed artists like Lin to reconsider submitting another piece to the Pullman Arts Commission.

“I don’t know if I want to resubmit my work because I feel like it will never happen,” Lin said. “I don’t feel I was respected and my time was not valued.”

Fighting for attention for civil rights issues is a long and thankless journey for those who take it seriously. Our city government should not be making it an even heavier burden by allowing miscommunication and unclear goals to derail the hard work of its citizens, let alone questioning if civil rights issues even exist in Pullman.

In the end, the creation of a mural that represents true well being and hope for all of our citizens should be the goal.

This idea was shared again and again by councilmembers Dan Records, Brandon Chapman and Anne Parks.

“I disagree strongly that we should rescind the entire process,” Parks said. “That’s really disrespectful to the artists who have already done the work and who have gotten the feedback from the public.”

Nevertheless, when it came to a vote, the council was not on the side of the artists.

Although I can empathize with a body of representatives who want to accurately represent their citizens’ opinions and beliefs, they, as a body, have unfortunately missed the mark on this project.

At the meeting on Feb. 23, the council also voted to create a subcommittee made up of three council members who would ensure more clarity as the project moves forward for the second time.

Councilmember Eileen Macoll made the official call, clarifying the role of the subcommittee as it took on the task of reworking the approach to this mural project.

“I move that we form a three-councilmember subcommittee to clarify the objectives for a mural that promotes harmony, unity and awareness for considerations of racial inequality and fairness in our community,” Macoll said at the meeting.

The subcommittee will bring back their decisions on the message the council hopes to send through the art piece. Once the council has made the final vote, it will again be up to the Pullman Arts Commission to make it happen.

Made up of councilmembers Macoll, Records and Pat Wright, this additional group will be an efficient second piece of this process.

I hope they can bring clearer ideas that focus on the most important goal of the mural: to state clearly that our city council believes that Black lives matter.

“I think [the subcommittee] needs to do this work rather quickly so that we can give sufficient time to the arts commission to do the call, and give the artists that clarity fairly quickly,” Records said.

On March 2, the council called for a special meeting. The Art Mural Subcommittee met with the rest of council, and together they made a motion to select the Spring Street retaining wall in downtown Pullman as the official site for the project.

Another special subcommittee meeting was called on March 5, where the Art Mural Subcommittee made a motion to recommend holding a town hall meeting on March 16 to gather feedback from Pullman citizens.

According to the Pullman City government website, the subcommittee hopes to get this feedback “regarding specific content elements to be considered for including a survey that will go out to the community.” This would support the council’s goal to align the mural’s approval process with their council guidelines.

Ultimately, we all want the assurance that our city council truly does support the people of color in our community. So far they haven’t impressed us with their actions.

“I think the people in Pullman are amazing … they are so involved,” Lin said. “However, I don’t think our leadership can really represent us.”

In terms of how students and lifelong Pullman citizens might be able to help avoid problems like this in the future, Lin said we should vote.

Though students might be here for only four to six years, the elections occurring in that span of time matter.

It should go without saying that council members who do not fully believe in the importance of the Black Lives Matter movement cannot represent our city anymore.

If students hope to live in an environment where their opinions are truly represented, vote. Attend the virtual city council meetings. Express your concerns, questions and support. And follow up if you don’t get a response.

Our lack of interest in local politics is partially to blame for this conundrum. We can no longer let citizens like Jiemei Lin and those who spoke in support of the mural project at the Feb. 23 meeting work alone.

We have to support every citizen in Pullman. The process which local artists and people of color in Pullman have been subjected to in order to be seen and respected is far too much to ask of any citizen.

To contact our mayor and council members, or to suggest the addition of something to their agenda, visit www.pullman-wa.gov/government/mayor___city_council.