Spring Street retaining wall could be filled in over several years; target completion date is June 19 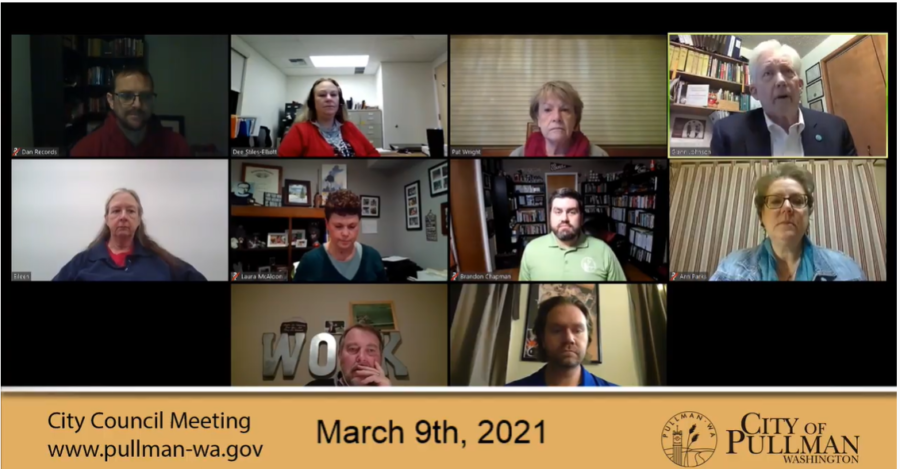 The council approved a series of panels, where each one would be created on an annual basis over a period of several years.

“It’s the city’s commitment to engage in work on having a seat at the table in this community-wide conversation that’s been occurring about what does racism look like in our community, what does it mean to us and how do we address it,” Councilmember Dan Records said.

The council approved 6-1 for the art to be installed on the Spring Street retaining wall with each panel being the width of an expansion joint.

Businesses, property owners and residents within 300 feet of the mural space will be notified about the possible project, timeline and options for feedback, Records said.

A town hall meeting will be held March 24 to collect community input to help develop a web-based survey open for all Pullman residents, he said.

Feedback collected through the town hall, voice calls, letters and so on will inform decisions on soliciting proposals from artists describing the mural requirements. The Pullman Arts Commission will then evaluate the submissions and make a recommendation to the council.

Records said the subcommittee recommended a target completion date of June 19, in recognition of Juneteenth, which celebrates the Emancipation Proclamation. The date will be flexible depending on submissions received.

The group hopes to plan an event that could include food or music to unveil the finished mural. Records said it would rely on COVID-19 regulations.

“When there’s a small group, that’s where the injustice might happen,” Councilmember Brandon Chapman said. “The whole point of this is to create some level of discomfort and to look at the overall structure that we exist in.”

Both Mayor Glenn Johnson and Councilmember Al Sorensen raised questions about sources of funding for the project. Previous discussions mentioned the city council would not be responsible for costs of the installation.

Records said the revised project would cost significantly less than painting the entire 120-foot wall. The Pullman Arts Commission originally talked about a $1,500 stipend for the artist using donations.

“We feel strongly that the city should move forward with this even if it has to come out of some public funds,” Records said.

In addition, the council tabled the quarterly financial update from City Planner Mike Urban to the next scheduled meeting.

The city received the lowest bid of about $2.03 million, he said. The project would use funds passed through Proposition No. 1 in the February 2018 bond.

The Pullman city architect projected the cost to be around $1.56 million, Gardes said.

Gardes said the rise in cost could be due to supply chain issues caused by COVID-19. The type of material used for a small construction site increases the price per square foot.

The project would allow for a 3,800 square foot building to host events and meetings, he said.

City administrators will now come up with ideas for rescoping the project to reduce costs without compromising design integrity.