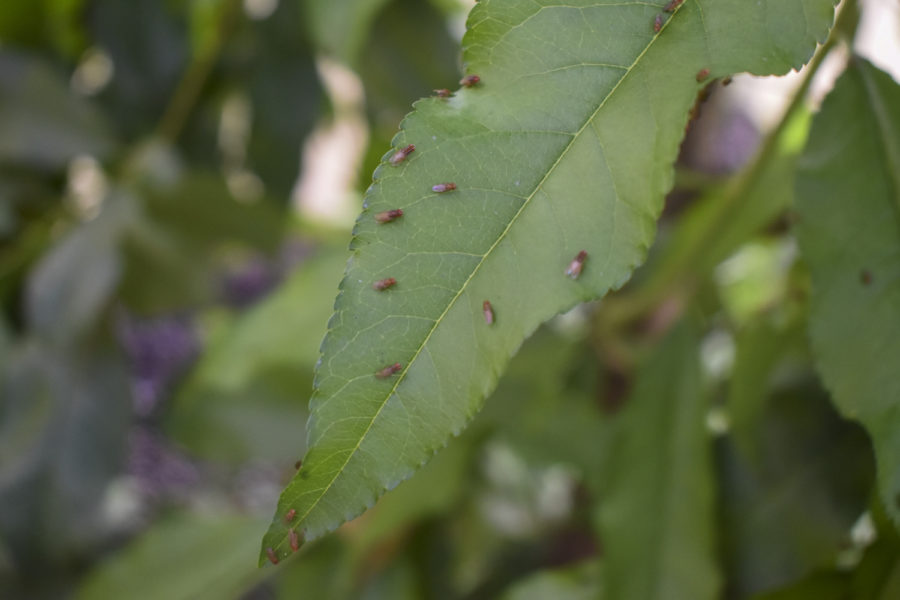 Two species of flies are on a dwarf peach tree. Researchers found that one species of fly grew larger and developed faster after being around an invasive fly species.

Fruit flies can rapidly adapt to their environment in just a few generations, WSU researchers found. This provides evidence to show that other species may be able to adapt to the effects of global climate change.

In four months, the Drosophila flies rapidly adapted new traits in approximately nine generations, according to the study.

After nine generations, the flies were larger, laid fewer eggs and developed faster than flies that were not exposed to the invasive species, said Tess Grainger, lead author and postdoctoral fellow at the University of British Columbia.

“It’s another demonstration that evolution can happen within just a few generations, kind of substantial evolution, Grainger said. “That gives more evidence in favor of this idea that species could potentially rapidly adapt to changing climates.”

This research cannot say for certain whether or not species will successfully adapt to climate change because there are other external factors that affect whether species survive in the face of climate change, said Seth Rudman, co-author for the study, Banting Postdoctoral Fellow at the University of Guelph and WSU Vancouver adjunct professor.

“It’s pretty hard to predict whether one species will or will not go extinct for all of those reasons because you need to understand all of those parameters now and going forward,” Rudman said.

When species have a large population, fast generation times and high genetic diversity, they are more likely to rapidly adapt to changes in their environment, Grainger said.

Flies were chosen for this research because their large population size and fast generation times make them more likely to adapt quickly to environmental changes. It takes about two weeks for a new generation of flies to be born, Rudman said.

The experiment took place over the course of multiple months with one phase in the summer and one phase in the fall. The study was conducted in outdoor fields near the University of Pennsylvania to measure what fruit fly adaptations would be like in a more natural environment, Grainger said.

The Drosophila flies were able to rapidly evolve in the experiment, and rapid evolution may help species adapt to changing climates, Rudman said. With climate change threatening the diversity of many ecosystems, it will be important for organisms to adapt to new climates.

Biodiversity loss leads to a reduction in ecosystem traits like the amount of plant mass present and clean water, which could threaten human survival, Rudman said. But it is difficult to say exactly how many species would have to go extinct for humans’ existence to be threatened.

“It’s very hard to peg a number where that would happen, like what percent of biodiversity loss,” Rudman said. “That’d be tough to say.”