Researchers make raspberries easier to use in baking

Raspberries more damaged when frozen than other fruits, vegetables 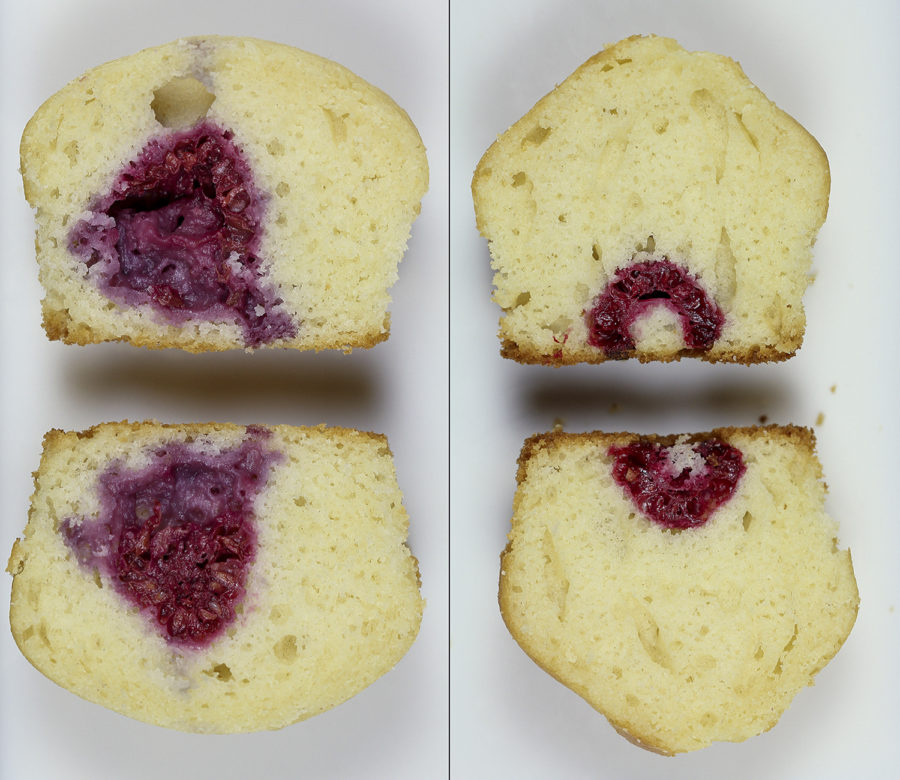 The berries are primarily grown in California, Washington and Oregon, and are growing in demand. However, they are not currently successful when used in baked goods, said Shyam Sablani, project adviser and professor in the WSU Department of Biological Systems Engineering.

Raspberries are commercially available and used primarily for things like smoothies and pies, he said. But they are not typically used for scones and cakes.

They are often frozen before they are stored. When raspberries are thawed to use in baking, the fruit juice leaks and makes the baked goods undesirable, said Armando Quintanilla, graduate student in the WSU School of Food Science.

When fruits and vegetables are frozen, the water in them turns to ice, Sablani said. Ice is less dense than water and breaks down the cellular walls of food. When raspberries are thawed, the walls are already damaged, and the cells cannot properly hold the water. There is then leakage, called syneresis.

“Their cellular structures are very weak,” he said. “You see much more damage with raspberries compared to other fruits and vegetables.”

The research team used a three-step treatment plan to make the berries more stable and address the issue of syneresis, Quintanilla said.

“The first step was, we wanted to find out, how can we make the berry firm?” Sablani said.

He said the berries are first infused with calcium and a compound called pectin, which is often used in the food industry as a thickener. It is safe to use and edible. The researchers did not want to use synthetic chemicals.

Pectin is a natural starch found in the cell walls of fruits and vegetables. It gives them structure, Sablani said. It is also used in jams and jellies.

After being infused with pectin, the berries are partially dried, about 20-25 percent, with a hot air drier to reduce the amount of water in the berries. This makes them easier to freeze and reduce juice leakage, he said.

Sablani said partial drying also improves the texture of berries and helps them maintain their color.

The last step is to spray the berries with an edible coating that uses sodium alginate to minimize syneresis, Quintanilla said.

The three steps were inspired by prior research done with treatments to freeze raspberries, Sablani said. WSU researchers decided to combine all of the steps to address the challenges with baking and freezing raspberries.

The raspberry treatment has been successfully tested in muffins by a bakery in Bellingham, he said. The team is working to improve and expand the treatment.

“The next step is to scale up on an industrial level,” Quintanilla said.

The raspberry industry, which includes growers and processors, wants to increase market value for raspberries, outside of smoothies and pies. There are endless possibilities for raspberry use, Sablani said.

He said the team wants to explore market potential for the raspberries and consumer response with different products, including yogurt.

The goal is also to improve the current treatment, Quintanilla said. The three-step process takes a lot of time and energy in the lab, and a simpler process would be more time-effective.

The Washington State Department of Agriculture is funding the research, Sablani said. They find value in the work being done, and raspberry growers and processors look forward to future results.

New raspberry products can be expected to be seen on grocery store shelves in the future, he said.