WSU quarterback Cammon Cooper came up with the idea; one woman's dog ran around her freshly shoveled driveway 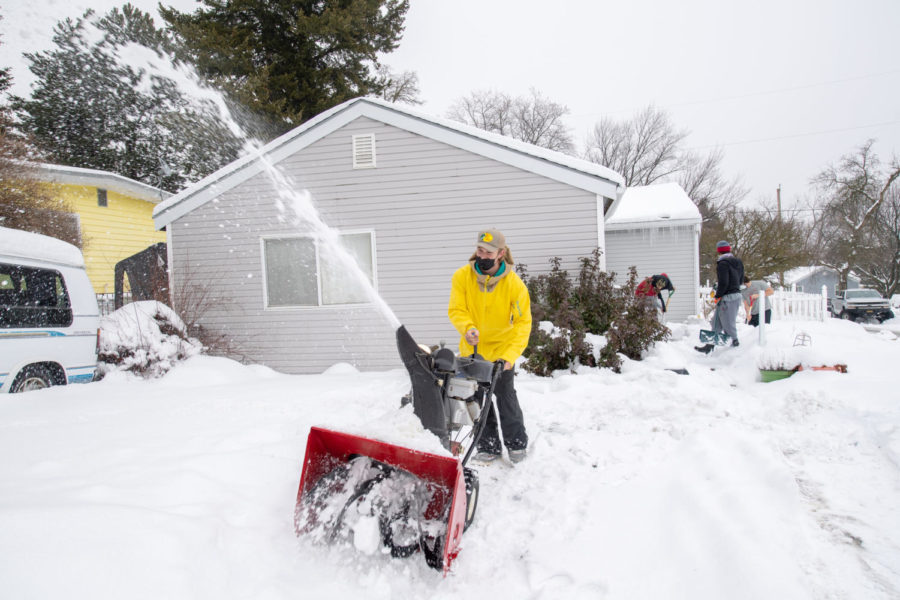 The team assisted a former WSU professor, who is in his 90's. Dean Janikowski said it was great to help out a fellow Coug through acts of service.

The WSU football team found a way to reconnect and give back to fans after volunteering to shovel snow for the elderly and people in need in the Pullman community.

Cammon Cooper, redshirt sophomore quarterback and finance major, said he was trying to shovel out his driveway when he thought of the idea to offer up the football team to the Pullman community.

“I was just thinking, it’s hard enough for us, I’m sure there’s other people that are having it a lot worse off so just thought to ask the guys in Council, trying to come together and it worked out really well,” Cooper said.

Dean Janikowski, redshirt freshmen WSU kicker and business major, said Cooper came up with it and Janikowski thought it was a great idea.

Janikowski said he grew up on a farm and knew that this work was easier for him than older people. He went around his neighborhood first, offering to shovel snow before the volunteer project started.

Everyone had their own story, and it was great to connect with fans and the community, Cooper said.

One person the football team helped was a 95-year-old man who was a WSU professor for about 30 years. Janikowski said it was a great experience to help out a fellow Coug.

The team also assisted a woman who owned a dog named Bandit. Janikowski said Bandit was able to go out for the first time after they had shoveled out the snow.

“It’s the best feeling when you see someone and they’re telling you how much it means that you shoveled their driveway,” he said. “You don’t think it’s a big deal, but they’re just so genuine about it and it really makes your day.”

The team also helped out a woman who originally did not sign up for her driveway to be shoveled. Cooper said it was great to see his teammates help her out of the blue.

“She [was] saying how blessed she was that she was outside at the right time and it was pretty funny because she had a ton of snow in a pretty big driveway,” Cooper said.

The smiles on everyone’s faces were also heartwarming to see, Janikowski said.

Some of the emails the football players received from the people they helped made Cooper realize how significant their help was to everyone.

Cooper said he thinks this will open up more volunteer opportunities for the team, especially after other teammates saw how much it helped.

Cooper said he thinks acts of service are vital.

“You never know how much just like a little act of service can help out and it was pretty cool to see,” he said.

Janikowski said his church taught him that performing service acts is very important. However, he wants to do more for the Pullman community.

Cooper said their football coach Nick Rolovich considers acts of service necessary. The team could not be as involved early on in the pandemic, but hopefully, as circumstances improve, they can take on more volunteer opportunities.

Janikowski said the team accumulated 103 hours of service, and they are doing more with Rolovich.

Janikowski thinks this helped the team reconnect. He said they worked from around 9 a.m. to 4 p.m. This extended period gave them a chance to be around each other and not avoid talking to one another.

Cooper said it was tough at the beginning of everything because there was a lot of disconnect from his teammates last semester, but things are getting better.

“We weren’t able to ignore talking to each other and just getting to know each other a lot more,” Janikowski said. “Even though we still play on the same field, just [having] that personal connection is cool.”

Janikowski also learned there is more here in Pullman. He now knows how to navigate through Pullman much better.

The team was also able to use a snowblower, Janikowski said.

“I would spray one of the lineman’s cars … and it was just filled with snow,” he said.

Cooper had his own fun of “unintentionally” throwing snow onto his teammates’ backs.

“There were a couple of times of accidentally shoveling snow over each other’s shoulder on somebody else,” Cooper said. “But that kind of happens when you’re around a bunch of guys.”

Janikowski said the team made sure to take necessary precautions. They wore masks and were socially distanced, especially from the older people they helped, to keep them safe.

It has been so long since there have been fans in the stands so it was nice to show people that the team is still around, but more importantly, that they are actual people, Cooper said.

“I think a lot of them just think we’re celebrities and are hot-headed, and I think shoveling and helping out the community kind of just shows that we’re willing to help as well,” Janikowski said. “[We are] normal humans just [like] everyone else.”

There is a humanizing aspect to volunteering because fans only see players in a football helmet, Robinson said. It is different if they are face to face and get to have a conversation.

“I definitely think it opens up the community to them,” he said. “We’re all Cougs, we’re all here in Pullman…so we just want to make the best out of it.”

Robinson said he wants the players to be in the community, for them to do things that are selfless and make them uncomfortable so they grow as people.

“That’s what coach Rolovich wants to push, is really taking care of each other, and taking care of the community, and we’re all in this together,” Robinson said.

Everyone the team helped said they hope to be in Martin Stadium in the fall, Cooper said.

They still have volunteer projects within the community. Cooper said he and his teammates have been reading to elementary school students over Zoom.