Cougars fall to Arizona State in Pac-12 tournament; most likely end of 2020-21 season 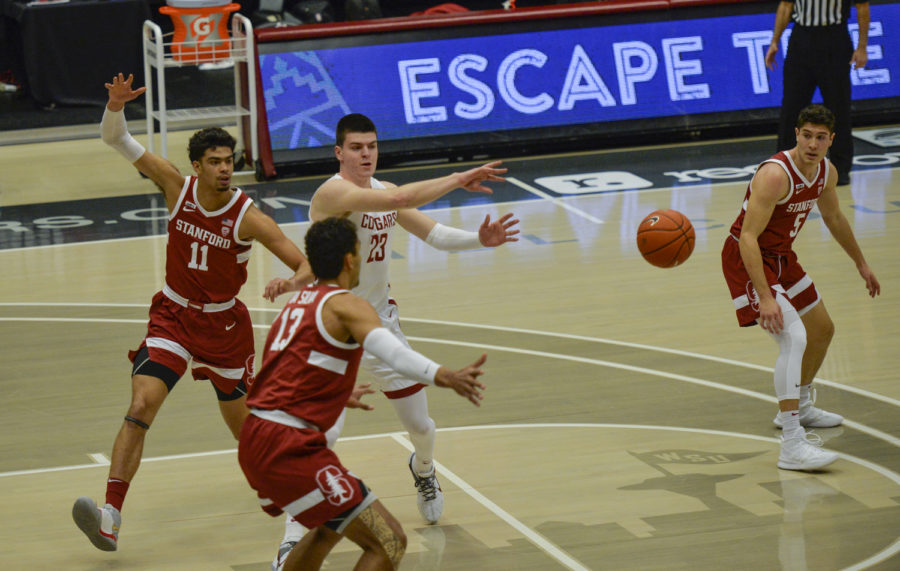 The WSU men’s basketball team’s conference season is officially over.

WSU (14-13, 7-13) fell to the Arizona State Sun Devils 64-59 after a missed game-winning opportunity from WSU with seconds left on the clock at the T-Mobile Arena in Las Vegas.

Senior guard Isaac Bonton returned to the starting lineup for WSU and led the Cougars in scoring with 19 points. Bonton hadn’t started for the Cougars since Feb. 13 as he was rehabbing a pair of ankle injuries. Bonton said it was nice to be able to make a return to the court against the Sun Devils (11-13, 8-10), however his future with the Cougars remains undetermined at this time, he added.

“I’m glad I got to compete with my guys again tonight and we’ll see what the future holds for us,” Bonton said.

Three other Cougars scored double-digit points, one of which being sophomore guard Noah Williams, who had the ball in his hand during WSU’s last possession to win the game.

Williams drove the lane after receiving the inbound on the opposite end and attempted a layup between three defenders. ASU’s Jaelen House stripped the ball from Williams and ASU secured the win.

WSU head coach Kyle Smith said the play was something they planned for. Smith and Bonton thought the ASU defense would double Bonton, so they wanted to move the ball elsewhere and get a shot up. Smith admitted after the game that he would’ve loved to see a foul on either side during the play on Williams just to keep the game alive.

“Noah made a good play, he split it, and got downhill and he was running at the rim and they helped uphill,” Smith said. “And then we missed, or whatever, a turnover, we didn’t get a foul quickly enough or didn’t get the whistle quickly enough and didn’t get an opportunity there.”

Smith said before this game that the Cougs needed to take care of the ball in order to have a chance against the fast, transitional guards in the Sun Devils’ front court. WSU finished the game with 20 turnovers, and ASU scored 22 points off those turnovers, over a third of their total points.

“It’s an area that we really have to improve in to be any good,” Smith said.

The game had a relatively slow start on both sides, but then WSU and ASU started duking it out for the remainder of the first half. ASU’s leading scorer this season, Remy Martin, struggled throughout the first half shooting just 1-6 from the field.

Once the second half started, WSU came out hot and took a commanding seven-point lead just four minutes in; this would be the largest lead by either side throughout the game. ASU eventually found their footing and then held WSU scoreless for a few minutes. WSU did the same to ASU, and then there were seven minutes left in the game and the game was tied at 47. This would be the last time that the game was tied.

Bonton put together a commanding, productive second half to keep his team in contention as he scored 11 points in the second half alone. Bonton said these efforts from him were nothing but routine and he was not willing to take a loss just yet.

“Every game I just try to do what I can do as a leader, as a captain. I try to help my team to win, try to contribute in every way I can,” Bonton said.

Smith said the locker room is definitely depressed about the loss, but the Cougars still keep their heads up for a possible postseason invite.

“You want to be in the big dance, you want to play in those things, you want to advance, but you don’t do it by going on spring break,” Smith said. “You practice, get better and train your mind to play well in these situations.”

ASU moves on to face the number one overall seed Oregon Ducks tomorrow at 11:30 a.m. PST in T-Mobile Arena in Las Vegas.