Although there were many ups, downs to season, young stars show promising future 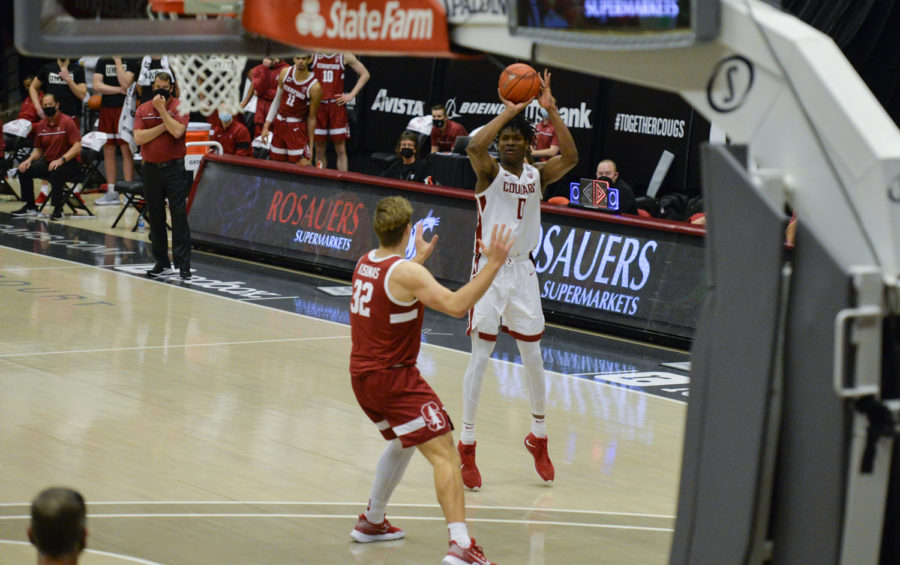 With a 64-59 loss to Arizona State on Wednesday, the season is officially over for the Cougars men’s basketball team.

That means that now is the perfect time to take a look back over the 2020-21 season for WSU men’s basketball and hand out some end-of-year awards for what has been an exciting season.

Before diving into everything, I think credit needs to be given to head coach Kyle Smith. This is a program that has not seen a winning record for the first time since 2011-12, breaking one of the longest streaks in the nation.

Smith has done a great job of bringing in an elite group of young players to help lead this program. As they develop, this team will only improve.

Smith also leads while on the sidelines by being one of the most animated coaches in the country. His energy translates to the players. While it may cost the team a couple of free throws from time to time, overall, the energy seems to fuel his players.

The Cougars found themselves locked in close battles all season. Many times, they came up short on some poor decisions from young players, but that will change as they gain experience. To finish above .500 with such a young roster shows that this team has the talent. Once you add the experience, WSU will be climbing the Pac-12 ladder in the coming years.

Bonton has already alluded to leaving the program after this season on social media, but what the transfer did on the court this season was nothing short of spectacular. At times, I was critical of his tendency to control the ball a little much, but he helped WSU win more games.

He was more a part of the offense in Pullman than any other player was for any other Pac-12 school. His usage rate of 31.3 percent was clear of second place by a full 1.3 percent.

That means that of every WSU possession with Bonton on the floor, nearly a third ended with the guard shooting, turning the ball over or getting to the free-throw line.

With Bonton not on the floor for the whole season or not providing leadership for the whole year, there is no telling where this team would have been.

If anyone knows me, they could have told you my pick for freshman of the year. Personally, I do not think it is all that controversial.

Abogidi quickly became a star on the Palouse. He led the team in rebounds and blocks, while also sitting third in points per game.

Abogidi did well from the conference perspective, as well, finishing in the top five in offensive, defensive and total rebounds, as well as blocks. On top of that, Abogidi ranked second in the Pac-12 in defensive rating … as a freshman.

To round it all out, Abogidi was eleventh in win share per 40 minutes in the entire conference. Even as a freshman, Abogidi has shown that his impact for the Cougars is immense.

The future is bright for Abogidi. It will be interesting to see how long he stays in Pullman, as it is likely the NBA will come calling soon enough with a talent of this level.

The Cougars had a lot of great talent coming off of the bench this season. DJ Rodman was also a big name that was in the running for this one, but ultimately, the performance that Kunc put on was enough to get him the spot.

Kunc did get seven starts this season when there were some health issues elsewhere in the lineup, but overall, he played in fifteen other games off of the bench.

In those 22 total appearances, Kunc averaged 6.6 points (fifth on the team) and four rebounds (tied for fourth on the team). His impact coming off of the bench cannot be overstated, as Kunc often provided a spark for the team.

This season, Kunc had seven double-digit performances, including five against conference opposition. Those seven games are the sixth most on the team, only trailing the five players with the most starts.

The Slovenian had a huge impact on and off of the court. Though nothing is guaranteed, I would assume, as of now, that he would be back in Pullman for his senior season next year, which would be a huge plus for the Cougars.

Game of the Year: Feb. 20 vs Stanford

This game had everything you could possibly want: Clutch moments, a back-and-forth battle, a spectacular individual performance and a Cougar win.

The Cougars came into this game following a dominant 82-51 win against the Cal Golden Bears.

It was also the third consecutive game that the Cougars would not have Isaac Bonton, but that would prove to be no issue for WSU.

At the halftime buzzer, WSU trailed by one. The second half provided more than enough fireworks, as well.

With six seconds remaining, WSU trailed the Cardinal by three. That is when Noah Williams made one of the most iconic plays of this season.

Williams brought the ball up court and with one-on-one coverage, took one step to the left before firing up a shot. As Williams hit the deck, we all saw the ball travel through the net to tie the game at 63 and bring the sophomore to a career-high of 34 points.

Both teams scored five in the first overtime and eight in the second, before WSU pulled away with a 9-0 triple-overtime period to pick up an 85-76 win inside of Beasley Coliseum.

Williams finished the game with 40 points, becoming just the seventh player in program history to hit the mark and falling five points short of tying the all-time program record.

While not being quite the game that the home meeting with the Cardinal was, the Jan. 31 game against Washington in Seattle is also worth mentioning.

Any win over the Huskies is sweet. But a combined 46 points between Bonton and Williams adds to the allure of this game.

Additionally, Williams getting a chance to beat his hometown team in Seattle is great to see, especially considering how much he was enjoying the game.

Williams would end up getting tossed from the game late for his second technical, but it did not hurt the Cougars as they picked up a big 77-62 win.

As a whole, this has been a fantastic season for the Cougars. Smith has done his part to turn things around and the players seemed to gain momentum and energy throughout the year. The loss to Arizona State in the Pac-12 Tournament basically guarantees the season is over for the men’s team, but despite that, it was a memorable one, to say the least.