‘Our town is in a live-or-die situation’ 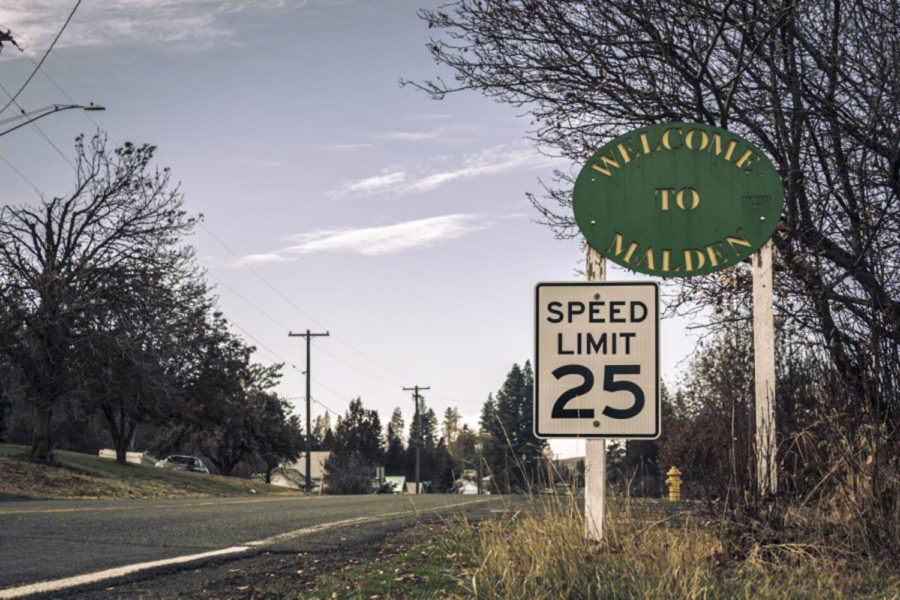 The western entrance of Malden, Washington, alongside Broadway Avenue scarred by remains of scorched trees, powerlines and wheatgrass on Nov. 7.

The town of Malden spent the last six months cleaning and rebuilding from a devastating fire that wiped out 80 percent of its buildings in early September.

One of the biggest concerns right now is assisting people into houses before next winter, said Malden Mayor Dan Harwood. Living in an RV all winter has taken its toll on some of the community members who have larger families.

“It’s a very serious problem because you live in an RV all winter, and that’s not much space,” he said. “If you’re by yourself, that’s one thing. But if you’ve got a couple of dogs and a couple of kids, those walls get pretty closed in quick.”

Many residents did not have insurance; when the town burned, so did all of their belongings, Harwood said. A lot of the residents were older couples, and now they have to try to establish a life from scratch.

“One of the members that just moved into a trailer has been here at least once a week for three weeks,” Harwood said. “They come in and they’re crying, and they say, ‘We want to be home. What’s it take for us to be home?’”

PTSD has been a concern for Harwood and Malden interim Mayor Bob Law. Even though PTSD, or post-traumatic stress disorder, is an acronym that tends to be overused, it is understandable, Harwood said.

Law said living in trailers for the majority of fall and winter, and not knowing when they are going to get a home again, caused the community to feel cooped up. This worsened during the height of the COVID-19 pandemic.

“There’s a lot of heartbroken people,” he said, “and that’s something some people will never come back from.”

Malden residents have been trying to rebuild houses and community centers, Law said, but COVID-19 increased the prices of building material.

After losing their homes, various community members dispersed to the point of no communication. Harwood said it took him four months to find and talk to one of his friends after the fire.

“We’re not 100 percent sure where all the people we had are living,” he said. “We’ve got lists upon lists of people. And we think we know where they live, but we just don’t know.”

Law has been running the community food bank where he lets people come in and “shop” around. He said he does not like to limit people because they are the only ones who know what they need. Neither Harwood nor Law get paid for the work they do.

“We do this because we’re helping people. Bob runs the food bank, and it’s a huge amount of time,” Harwood said. “He does it for one reason, and that’s to see somebody smile.”

Harwood said the community is working together to hold themselves up. Between losing homes and losing contact with other residents, the town has roughly 75 people left.

“Our town is in a live-or-die situation,” he said, “and we’re trying to keep it going.”

Harwood said he is excited about the prospect of having fiber optics in town. The optics were supposed to be installed within the last two weeks, but for now, the timeline is undetermined.

The fiber optics will allow people who work from home to come to Malden and hopefully revamp the town, he said.

“We live in a pretty amazing place. We’re 45 minutes from Pullman, 45 minutes from Spokane and 22 miles from Eastern Washington University,” he said. “Once we get fiber, there’s no limiting factor of how many people could move in here.”

Both Harwood and Law understand the town will never be the way it was. They said they will take this opportunity to move on and move forward.

“The town isn’t what it was anymore. That burnt down,” Hardwood said. “Think of it as if we just came in on the wagon train in 1909, and now we have to build it.”