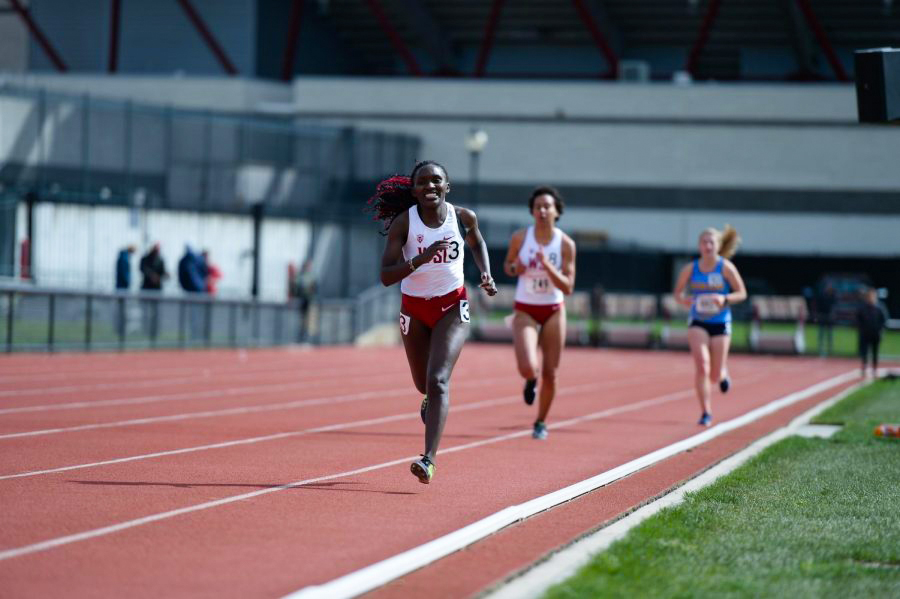 The WSU track and field team will be competing in the NCAA Indoor Track and Field Championships this Friday and Saturday.

Another week of WSU sports means we all need another weekly viewing guide. Once again, COVID-19 has caused the cancellation of many sporting events this week. The baseball series in Seattle against the Redhawks and Huskies has been postponed and a pair of soccer matches against No. 16 Cal and No. 18 Stanford have been canceled.

Noon – Get the day started with the Cougs taking on the NCAA Indoor Track and Field Championships. Day two kicks off on Friday, but it will be day one for WSU. Three events on Friday will feature Cougars with the men’s mile semifinal starting at noon, which will feature Zach Stallings. Fifteen minutes later, the men’s 60-meter hurdles semifinals will commence with Sam Brixey representing the Cougars. To round out the day, Colton Johnsen will get his first of two shots at a championship when he competes in the men’s 5000-meter final at 1:05 p.m. The whole event can be streamed on ESPN3.

1:30 p.m. – No. 38 ranked tennis takes to the court again following a win against the Utah Utes on Thursday. The match will be the first time that the Cougars have gotten to compete on the outdoor courts this season and will see WSU face No. 26 Arizona State. The key singles match-up to watch will be No. 55 Michaela Bayerlova facing No. 37 Ilze Hattingh in the top slot. All-time, the Sun Devils hold a 25-1 series lead. The event will not be streamed as of now.

6 p.m. – No. 16 volleyball heads on the road for match one of two against the Oregon State Beavers. Oregon State currently sits at 5-7 on the season but come into the series off of a sweep against the Cal Golden Bears last weekend. The Cougars are also coming off of a sweep against the Golden Bears two weeks ago, before last week’s meeting with USC was canceled. WSU won their last four and seven of their last eight. The Cougars lead the all-time series 52-42. The match will be live-streamed by the Beavers.

Noon – If all goes well on Friday, Saturday could be a busy day for WSU track and field. On the third and final day of the NCAA Indoor Track and Field Championships, there are four potential events that could contain Cougars. Up first is the men’s mile final, which Zach Stallings could qualify for with a good performance on Friday. Next, at 12:15 p.m., Sam Brixey could be in the men’s 60-meter hurdles final depending on his Friday performance. Then, 45 minutes later, Colton Johnsen gets a second attempt at a National Championship when he competes in the men’s 3000 meters final. Finally, at 3 p.m., Charisma Taylor will compete in the preliminary rounds and final of the women’s triple jump. The whole event will be live on ESPN3.

4 p.m. – Cougar alum Aron Baynes and the Toronto Raptors will travel to Charlotte, North Carolina to face the Hornets. The Hornets do not currently have any Pac-12 alumni on their team but do have LaMelo Ball, who was committed to UCLA for a little while. The game will be live on NBA League Pass.

5 p.m. – Another Cougar alum gets on the court as CJ Elleby and the Portland Trail Blazers head to Minnesota to face the Timberwolves. The Timberwolves have three Pac-12 representatives in Jaden McDaniels from Washington, Jordan McLaughlin from USC and Jaylen Nowell from Washington. The game will be live on NBC Sports Northwest and the NBA League Pass.

Noon – The No. 16 WSU volleyball team will host Oregon State in their second match-up of the series. Once again, the Beavers will live-stream the match.

1 p.m. – WSU tennis gets back on the court, as the No. 38 WSU faces the 8-4 Arizona Wildcats. Arizona currently holds a 20-6 all-time record against WSU, but the Cougars are positioned to turn things around. The match will not be streamed as of now.

5 p.m. – CJ Elleby and the Blazers will play game two of a two-game visit to Minnesota. Once again, the game will be live on NBC Sports Northwest and the NBA League Pass.

6 p.m. – The Raptors and Aron Baynes also have a back-to-back, but this time in Chicago instead of Charlotte. The Chicago Bulls have two Pac-12 representatives in Zach LaVine from UCLA and Lauri Markkanen from Arizona. The game will be live on the NBA League Pass.

10:50 a.m. – Tune in to ESPNU for the NCAA Cross Country Championships, as WSU’s Erin Mullins will look to make a splash at the event hosted by Oklahoma State in Stillwater, Oklahoma.

7 p.m. – Not a whole lot going on in WSU sports on Tuesday, but there is the chance to tune in and watch WSU’s CJ Elleby and the rest of the Trail Blazers face Zion Williamson and the New Orleans Pelicans on national TV. The Pelican’s Lonzo Ball from UCLA is the only Pac-12 alum playing in New Orleans. The game will be live, nationally, on TNT.

3 p.m. – After losing a weekend in Seattle due to COVID-19, WSU will head out on the road for one game against the Portland Pilots. The Cougars currently hold a 74-28-1 record against Portland, including a record of 29-11-1 when on the road. As of now, there has been no announcement about where the game can be viewed.

4 p.m. – Aron Baynes and the Raptors continue their road trip as they visit the Detroit Pistons. The Pistons’ only current Pac-12 representative is Washington’s Isaiah Stewart. The game will be live on NBA League Pass.

All day – Pac-12 Champion Chloe Larson will get her shot at a National Championship for the first time on Thursday. The swimmer earned qualifications in two different events with one taking place on Thursday and one on Sunday. The Thursday event will be the 50-yard freestyle. Preliminary rounds will take place in the morning around 7 a.m. with the finals commencing shortly after 3 p.m. The whole event will be live on ESPN3.

7 p.m. – Once again, CJ Elleby and the Trail Blazers will be at home against the Pelicans. The game will be live on NBC Sports Northwest and the NBA League Pass.