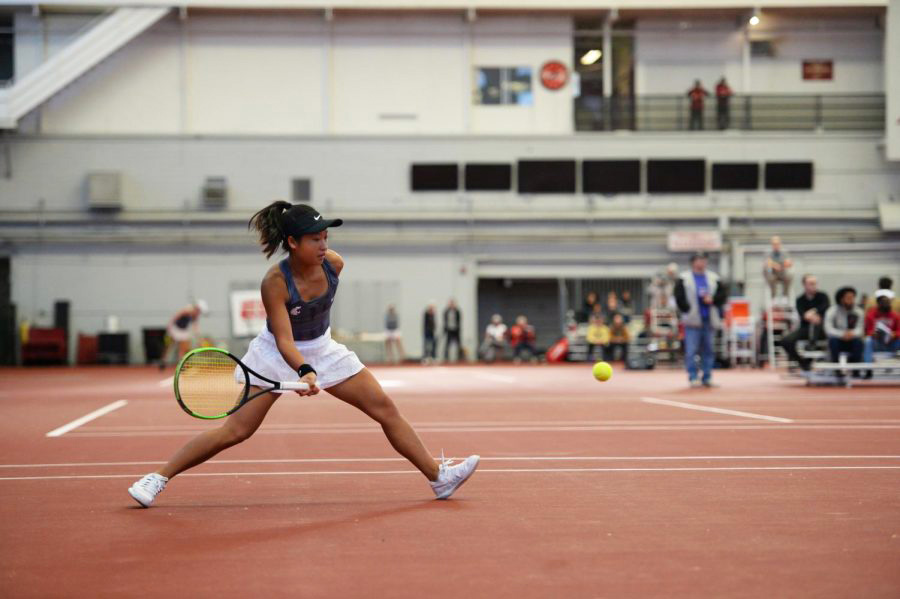 Junior Savanna Ly-Nguyen is 9-1 on the season and has earned the winning point in the Cougars last two matches.

The No. 38 WSU tennis team is set to finish the last two games of their three-game homestand this weekend after defeating the Utah Utes on Thursday.

The Cougars will host No. 26 Arizona State at 1:30 p.m. Friday and Arizona at 1 p.m. Sunday in the Hollingbery Fieldhouse.

WSU (7-5) is coming off of a 4-1 victory over Utah (6-5) on Thursday after another clinching point by junior Savanna Ly-Nguyen, who improved to 9-1 in singles matches this season.

WSU rolled in doubles play to earn their first point of the match, with fifth-year Melisa Ates and junior Yang Lee winning at No. 2 and sophomore Pang Jittakoat and freshman Fifa Kumhom winning at No. 3. Senior Michaela Bayerlova and junior Hikaru Sato did not finish their doubles match at No. 1.

The Cougars now sit at 7-5 after their win against Utah while they look to add two more to the win column against the Arizona schools.

Arizona State is led by senior Ilze Hattingh, who is currently ranked No. 37 in the nation. In doubles, Arizona State’s Tereza Kolarova and Hattingh are ranked No. 21 nationally.

The Cougars have not fared well against the Sun Devils since 2000, having a 1-19 record. In their last matchup in March 2019, ASU shutout the Cougars 4-0 in Pullman.

The Cougars’ final opponent, the Arizona Wildcats, have an 8-4 record with a 0-1 record in Pac-12 play. WSU won its last two meetings against Arizona, but are 6-20 all-time.  The Wildcats are set to play the Washington Huskies in Seattle on Friday before traveling across the state to Pullman for Sunday’s match.

Bayerlova was named the Pac-12 Women’s Tennis Player of the Week on Tuesday. She was a key contributor in the Cougars’ victory against USC on Sunday. This is the fourth time in her career that Bayerlova has received this honor, which marks the most in history by a Cougar tennis player.

Last week, the Cougars won their second-ever victory against USC, as they defeated the No. 16 Trojans 4-3. It came down to Ly-Nguyen to solidify another win for the team in a three-set victory.

Head coach Lisa Hart thinks the Cougars will be recovered from their matchups last week and will be ready for the triple-header.

“We will take a day off. And we will just kind of do an ice bath,” Hart said. “And then hopefully we’re in good enough shape where we will be ok. Winning helps, winning helps.”

Don’t miss WSU tennis in action against Arizona State at 1:30 p.m. Friday and Arizona at 1 p.m. Sunday. The matches can be live-streamed through the WSU Athletics website.