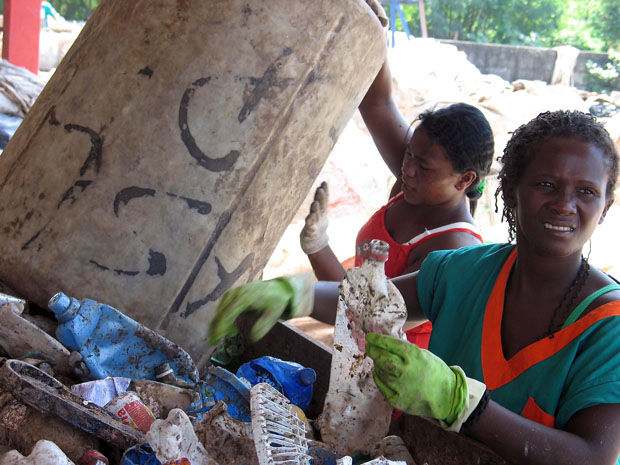 The winner of the Global Case Competition, Team Verde, plans to educate catadores - waste pickers - on the best techniques for finding recyclable plastic. Team members would also like to implement neighborhood cleanups and school-wide recycling competitions.

One group of Washington State University students may be on their way to Brazil, thanks to their knowledge of plastic waste in the country.

On Friday, the final five teams in the Global Case Competition presented their solutions for plastic waste in Manaus, Brazil to a panel of judges. This year’s case was inspired by the book Garbology by Edward Humes, which was WSU’s common reading book for the 2014-2015 school year.

Twenty teams comprised of 120 students registered to compete. The final 30 students put together a presentation, which were judged by WSU faculty. Each team had 10 minutes to present their proposed solution, followed by a five-minute question and answer session from the judges.

Winners of the Global Case Competition have the chance of going to Manaus to see the place they may help change in person.

Team Verde took home the first place title. They proposed Manaus start a neighborhood pick-up program and community-based development, such as teaming up with community leaders and creating design projects. They also pitched a Green Week in schools where the different schools would compete to see who could recycle the most. In addition, they hoped to educate catadores, or waste pickers, on better techniques for finding recyclable plastic.

The second place team, Cougar Cogeneration, focused on improving health conditions for catadores, involving schools and local hospitals in recycling. In addition to recycling, they also suggested building a gasification plant to help purify water and a large-scale plant and sorting facility.

The last team to present, taking the fourth place prize, was EMBRACE Plastic Waste. They suggested building homes out of recycled bottles and educating the public on the importance of recycling. They also suggested segregating waste in homes and training waste pickers.

The fifth place winner, É do Manaus, focused on teaching children in schools to recycle in hopes that this knowledge would be brought home. They also suggested implementing collection and sorting facilities, as well as upcycling plastic materials to build new items such as soccer balls.

Other than the opportunity to win a trip to Brazil, participants chose to get involved with the Global Case Competition for a variety of reasons.

“I felt very challenged to get out of my comfort zone and think outside the box because my major is pharmacy. It has nothing to do with being environmental,” said Sara Dumit, a member of Team Verde. “The challenge made me step forward.”

Dumit said the team addressed the root of the problem and their plan was on the right track to inspire change.

Several members encouraged others take part in the Global Case Competition next year, no matter their major or year of education.

“I really appreciated the way that it’s structured,” said Emma Henselbecker, member of Team Verde. “It’s cross-campus … I think that organizing that where you’re working on a team of people in all different places in their educational career and in different locations is just a really valuable learning experience.”

Team Verde’s faculty advisor, Honors College Dean Grant Norton, said he credits all of their success to the students.

“They’re the ones who really come up with the ideas and do most of the work, and certainly all of the research,” Norton said. “As an advisor, I’m there to just help them when they’ve got questions.”

The first place winner will have the opportunity to travel to Brazil and their team name will be engraved on a plaque in International Programs. The top three winners will receive scholarships that are divided among team members.