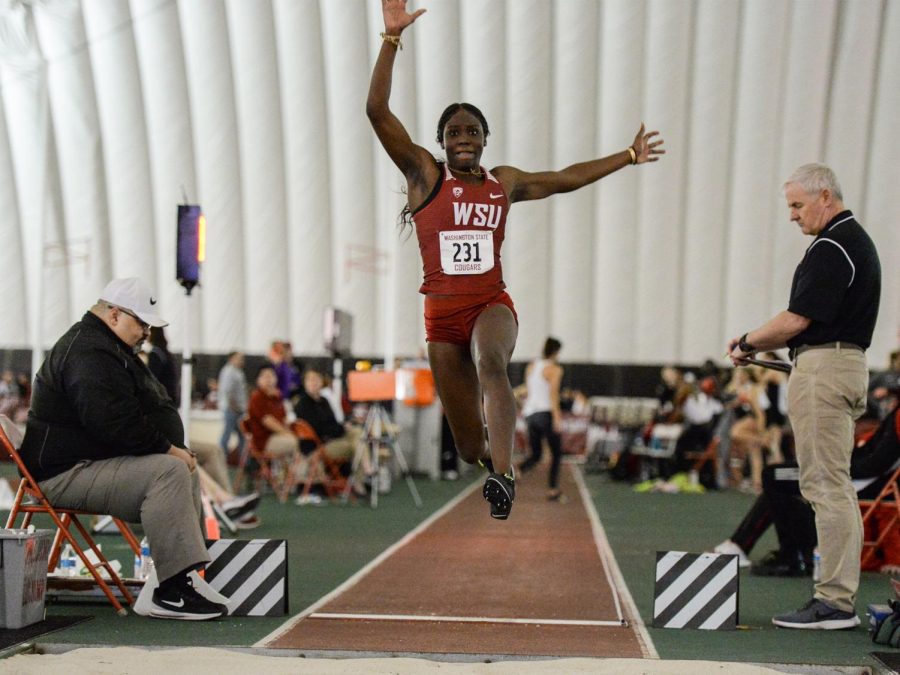 Then-freshman Charisma Taylor competes in the long jump during the WSU Indoor Meet on Jan. 19, 2019 at the Indoor Practice Facility.

The WSU track and field team sent four Cougar athletes to Randal Tyson Track Center in Fayetteville, Arkansas this weekend to compete in the 2021 NCAA Indoor National Championships for track and field.

WSU did not touch the track until day two of the three-day meet, when All-Americans Sam Brixey, Zach Stallings and Colton Johnsen got to stretch their legs following the 1800-mile journey to Arkansas.

Senior hurdler Brixey got the day started for WSU and competed in the men’s 60-meter hurdles. In the preliminary races, Brixey ran a time of 7.79 seconds.

That time put him at 11th place overall, only 0.05 seconds away from the top 10, which would have qualified him for the final round.

Following the 60-meter hurdles, the Friday in Fayetteville continued for WSU while senior distance runner Stallings ran the mile race. Stallings crossed the finish line with a time of 4:09.05, earning himself the honor of Second Team All-American in that event.

Redshirt senior Johnsen wrapped up the day for the Cougars, as the distance runner participated in the 5000-meter run. Johnsen ran the distance in a mere 14:01.86 to earn himself recognition as a Second Team All-American as well.

Johnsen raced again on the third and final day, this time in the 3000-meter run. He placed in the top ten in that one, crossing the finish line at 7:57.38. That finish gave Johnsen his second Second Team All-American title of the year.

Saturday’s events continued with WSU junior jumper Charisma Taylor in the triple jump event. Taylor posted the best performance of her collegiate career when she needed it the most. Taylor jumped 44-feet 8 inches (13.61 meters) in the final round after qualifying in the preliminary round.

The jump of 44-8 was enough to earn Taylor fifth place overall in the event, as well as shake up the record books for WSU and the entire country.

With that mark, Taylor set a new season, personal and WSU record in the women’s triple jump. The WSU record that Taylor broke was previously held by Taylor herself.

While the Nassau, Bahamas native rewrote WSU history, she set a national record in the process. Taylor now holds the Bahamian record in the triple jump, which pairs nicely with her title of First Team All-American.